We carry authentic Rhode Island State Flags in both indoor and outdoor varieties. Our flags are proudly made in the United States from durable nylon and are printed with vibrant long-lasting inks. The Rhode Island state flag is often displayed at schools, government organizations, banks, and other institutions in the state, as well as at the homes of people who take great pride in their Rhode Island heritage.

Our indoor flags are finished with a pole hem and your choice of with or without golden fringe. Gold Fringe is the traditional way to display an indoor flag, however, some people choose without fringe for a simple and clean look that is also less expensive. If you are looking for a complete indoor presentation set, our Build Your Own Indoor State Flag Set program allows you to select a durable nylon indoor Rhode Island Flag and choose between premium quality poles, bases, and ornaments, and tassel. For indoor applications, most buyers choose a 3ft. x 5ft. flag with an 8ft. pole, however, if you have a low ceiling, you may opt for a 7ft. pole, which is designed to work with drop ceilings. If you are looking for a very substantial state flag display, our 4ft. x 6ft. indoor flags can be paired with a 9ft. pole for our largest indoor display option.

Our outdoor state flags are finished with a canvas header and brass grommets and are offered in five sizes: 2ft. x 3ft., 3ft. x 5ft., 4ft. x 6ft., 5ft. x 8ft., and 6ft. x 10ft., to fit any sized flagpole. Typically, outdoor flags are flown outside of government organizations and institutions on in-ground and wall-mount flagpoles, however, some people also buy these flags to display their state pride at home. If you are looking for a wall-mount Rhode Island flag set to display outside of your home, our Build Your Own Outdoor State Flag Set program will allow you to choose between premium quality 6ft. poles and brackets to display the Rhode Island Flag on your front porch. 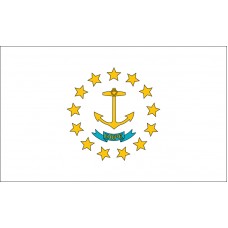 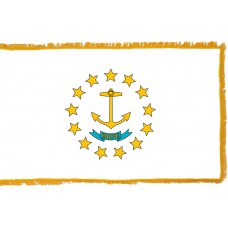 History of the Rhode Island Flag

The Rhode Island State Flag features a white background with a golden and blue emblem emblazoned upon the center center. The emblem is comprised of a golden ship anchor surrounded by thirteen golden five-point stars. Beneath the anchor, but inside of the circle of stars is a blue banner with golden text that reads, "Hope." The thirteen stars signify the original thirteen colonies as well as Rhode Islands position as the thirteenth state to ratify the constitution. The anchor is an early Christian symbol of hope which has been used in Rhode Island on various military regiment flags since the 1600s. The symbol references the following biblical quotation: "hope we have as an anchor of the soul," and pays homage to the founders of the state who were devout Christians.

The current flag of Rhode Island was adopted by the state's General Assembly in 1897, however, the current design is based on a design by its founders, Anne Hutchinson and Roger Williams. They were English Puritan ministers who left England to find religious freedom in what became New England in the 17th Century. Williams received a Royal Charter to use the Anchor design is his own seal in 1644. He added "Hope" to the anchor seal he had used as the flag of the State of Rhode Island and Providence Plantations, which he established in 1636. This is still the state's official name. Williams had fled religious persecution in neighboring Massachusetts. The white and blue colors of the flag pay homage to flags hoisted by various military regiments from Rhode Island dating back to the Revolutionary War, the War of 1812, and the Mexican War.

Rhode Island is the smallest state in the United States, yet it is only the 7th least populated state, due to the fact that it is the 2nd most densely populous state in the country. Covering an area of just 1,214 square miles, it has a population of more than a million people. Situated in the far north east of the USA, much of the state is dominated by the Atlantic Ocean and Rhode Island's many waterways which feed into it. The most prominent topographical feature of Rhode Island is Narragansett Bay, which is located off of the east coast of the state and is home to more than 30 islands within the bay. Narragansett Bay also forms part of a lowland region of the state, while the west of the state rises into the New England Upland. Rhode Island's largest and capital city is Providence, located in the north east of the state.

By the time of the Declaration of Independence in 1776, Rhode Island was a long-established colony. Providence especially played a big part in achieving the USA's independence from the British empire. As the state's flag shows, Rhode Island was one of the 13 founding States of the Union. It is known as the Ocean State because of the large coastline, especially for such a small state. Rhode Island is also part of the Northeastern Coastal Forests Ecoregion.

We offer free images of the Rhode Island Flag in four sizes (small, medium, large, and high resolution). These images are distributed royalty free for both personal and educational use and are ideal for use in projects and on websites. If you choose to use one of our images, attribution is appreciated, but not required.

The following html code snippets can be copied and pasted to add an image of the Rhode Island State Flag to your website: