We carry authentic Delaware State Flags in both indoor and outdoor varieties. Our flags are proudly made in the United States from durable nylon and are printed with vibrant long-lasting inks. The Delaware state flag is often displayed at schools, government organizations, banks, and other institutions in the state, as well as at the homes of people who take great pride in their Delaware heritage.

Our indoor flags are finished with a pole hem and your choice of with or without golden fringe. Gold Fringe is the traditional way to display an indoor flag, however, some people choose without fringe for a simple and clean look that is also less expensive. If you are looking for a complete indoor presentation set, our Build Your Own Indoor State Flag Set program allows you to select a durable nylon indoor Delaware Flag and choose between premium quality poles, bases, and ornaments, and tassel. For indoor applications, most buyers choose a 3ft. x 5ft. flag with an 8ft. pole, however, if you have a low ceiling, you may opt for a 7ft. pole, which is designed to work with drop ceilings. If you are looking for a very substantial state flag display, our 4ft. x 6ft. indoor flags can be paired with a 9ft. pole for our largest indoor display option.

Our outdoor state flags are finished with a canvas header and brass grommets and are offered in five sizes: 2ft. x 3ft., 3ft. x 5ft., 4ft. x 6ft., 5ft. x 8ft., and 6ft. x 10ft., to fit any sized flagpole. Typically, outdoor flags are flown outside of government organizations and institutions on in-ground and wall-mount flagpoles, however, some people also buy these flags to display their state pride at home. If you are looking for a wall-mount Delaware flag set to display outside of your home, our Build Your Own Outdoor State Flag Set program will allow you to choose between premium quality 6ft. poles and brackets to display the Delaware Flag on your front porch. 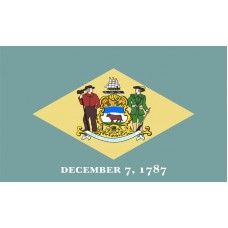 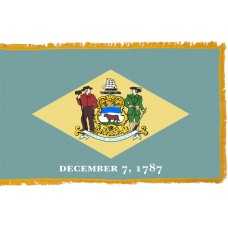 History of the Delaware Flag

The Delaware State Flag features a blue background. The central feature of the flag is a buff-colored diamond with Delaware's Coat of Arms emblazoned upon the center. The Coat of Arms features a shield with horizontal blue, white, and green stripes and contains a sheaf of wheat, an ear of corn, and an ox. Supporting the shield on the left-hand side is a farmer and on the right-hand side is a soldier. At the top of the shield there is a ship and below the shield is a banner with the state motto, "Liberty and Independence." Beneath the diamond, the date, December 7th, 1787, is emblazoned in white; This was the date when Delaware became the first state to ratify the US Constitution, which is a major point of pride for the state.

The blue and buff colors utilized in this flags design pay homage the colors of the uniform worn by George Washington during his time as a General in the United States Army. The ship at the top of the shield represents the ship building industry in Delaware. The corn, wheat, ox, and farmer represent the significance of the agricultural industry to the economy of Delaware. The wheat sheaf and ear of corn also pay homage to the crests of Sussex County and Kent County at the time that the flag was originally designed. The soldier signifies the role of the military in the Revolutionary War. The diamond formation in the center of the flag refers to Thomas Jefferson's nickname for the state, "The Diamond State." Jefferson referred to Delaware as a "jewel among the states" due to its ideal location. The current Delaware Coat of Arms was adopted on January 17th, 1777, while the current Delaware State Flag was adopted on July 24th, 1913.

Delaware is the second smallest state in the nation and is located in the Northeastern region of the United States. It shares borders with New Jersey, Pennsylvania, Maryland, and the Atlantic Ocean. The capital city is Dover. Delaware was named after the Delaware River which was named after Thomas West, 3rd Baron De La Warr, who was an English Nobleman. Delaware is divided into three counties which are New Castle County, Kent Country, and Sussex County.

The earliest inhabitants of the area that is now known as Delaware were Native American tribes which include the Lenape and Nanticoke. In 1631, the area was first colonized by the Dutch Traders until 1638, when New Sweden established a colony at Fort Christina and it was a colony of Sweden for 17 years. In 1651, the Dutch established a fort and following their victory in 1655 against Sweden, Delaware became part of the "Dutch New Netherland." In 1664, the English drove the Dutch out of Delaware and it became an English Colony. Between 1664-1682, the control of Delaware was between the Dutch and the English until it became a colony of Pennsylvania. In 1777, following the Revolutionary War, Delaware became an independent state.

We offer free images of the Delaware Flag in four sizes (small, medium, large, and high resolution). These images are distributed royalty free for both personal and educational use and are ideal for use in projects and on websites. If you choose to use one of our images, attribution is appreciated, but not required.

The following html code snippets can be copied and pasted to add an image of the Delaware State Flag to your website: