We carry authentic Nebraska State Flags in both indoor and outdoor varieties. Our flags are proudly made in the United States from durable nylon and are printed with vibrant long-lasting inks. The Nebraska state flag is often displayed at schools, government organizations, banks, and other institutions in the state, as well as at the homes of people who take great pride in their Nebraska heritage.

Our indoor flags are finished with a pole hem and your choice of with or without golden fringe. Gold Fringe is the traditional way to display an indoor flag, however, some people choose without fringe for a simple and clean look that is also less expensive. If you are looking for a complete indoor presentation set, our Build Your Own Indoor State Flag Set program allows you to select a durable nylon indoor Nebraska Flag and choose between premium quality poles, bases, and ornaments, and tassel. For indoor applications, most buyers choose a 3ft. x 5ft. flag with an 8ft. pole, however, if you have a low ceiling, you may opt for a 7ft. pole, which is designed to work with drop ceilings. If you are looking for a very substantial state flag display, our 4ft. x 6ft. indoor flags can be paired with a 9ft. pole for our largest indoor display option.

Our outdoor state flags are finished with a canvas header and brass grommets and are offered in five sizes: 2ft. x 3ft., 3ft. x 5ft., 4ft. x 6ft., 5ft. x 8ft., and 6ft. x 10ft., to fit any sized flagpole. Typically, outdoor flags are flown outside of government organizations and institutions on in-ground and wall-mount flagpoles, however, some people also buy these flags to display their state pride at home. If you are looking for a wall-mount Nebraska flag set to display outside of your home, our Build Your Own Outdoor State Flag Set program will allow you to choose between premium quality 6ft. poles and brackets to display the Nebraska Flag on your front porch. 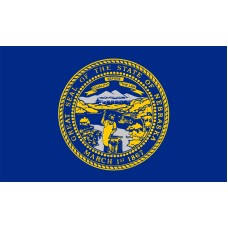 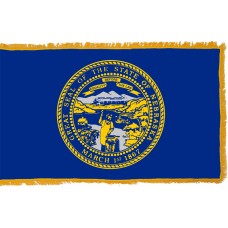 History of the Nebraska Flag

The Nebraska State Flag features a blue background with the Great Seal of Nebraska emblazoned in gold upon the center. The Great Seal of the State of Nebraska, which was adopted in 1867, features a river and a green field in front of a mountainous backdrop. A train rides across the seal in the background in front of the mountains, while a steamboat rides across the river. The train represents transportation, while the steamboat signifies commerce. The river depicted represents the Missouri River. A cabin is positioned on the green field with several sheaves of harvested wheat and a blacksmith toiling away at an anvil with a hammer. The cabin and wheat represent early agriculture settlers to the state, while the blacksmith pays tribute to the industrial development of the state. Above the mountains, a waving banner reads, "Equality Before the Law." Surrounding the seal in a circular formation is bold text that reads, "Great Seal of the State of Nebraska, March 1st, 1867." The Nebraska flag was adopted on July 16, 1963, making Nebraska one of the last states to establish an official flag.

Nebraska is located in the Midwest region of the United States of America. It shares borders with Wyoming, Kansas, Colorado, Iowa, Missouri, and South Dakota. The capital of Nebraska is Lincoln, while the largest city in the state is Omaha. Lincoln was formerly known as Lancaster until it was renamed in honor of President Lincoln. Nebraska is referred to as, "The Cornhusker State" in reference to its agriculture. It earned this nickname in 1945; before that, Nebraska was referred to as "The Tree Planters State" in respect to the millions of trees that were planted by the early Nebraska settlers.

Nebraska was first inhabited by Native American Tribes that included the Omaha, Pawnee, Missouria, Ponca, Otoe, and Lakota. The first European to explore the land was the Spanish explorer Francisco de Coronado in 1541 who proceeded to claim the land for Spain. In 1682, French explorer, Robert Cavalier arrived in the area and claimed the land for France.

Throughout the years, the land of Nebraska was a source of conflict between the British, French, and Spanish. In 1803, Nebraska became a territory of the United States of America as a result of the Louisiana Purchase. In 1804, American explorers Lewis and Clark traveled through Nebraska, reporting the states flat plains and the herds of bison that called Nebraska home. In 1819, the Fort Atkinson army post was established and in 1823, the first permanent settlement, a small trading post that became Bellevue (the oldest city in Nebraska) was established. In 1854, the territory of Nebraska was created, and people rapidly began to move here as they were also entitled to free land in the area. As people were moving to the area of Nebraska, the Native American Tribes that once inhabited the area, were soon pushed out. Nebraska officially gained statehood as the 37th State in the United States on March 1st, 1867.

We offer free images of the Nebraska Flag in four sizes (small, medium, large, and high resolution). These images are distributed royalty free for both personal and educational use and are ideal for use in projects and on websites. If you choose to use one of our images, attribution is appreciated, but not required.

The following html code snippets can be copied and pasted to add an image of the Nebraska State Flag to your website: