We carry authentic Vermont State Flags in both indoor and outdoor varieties. Our flags are proudly made in the United States from durable nylon and are printed with vibrant long-lasting inks. The Vermont state flag is often displayed at schools, government organizations, banks, and other institutions in the state, as well as at the homes of people who take great pride in their Vermont heritage.

Our indoor flags are finished with a pole hem and your choice of with or without golden fringe. Gold Fringe is the traditional way to display an indoor flag, however, some people choose without fringe for a simple and clean look that is also less expensive. If you are looking for a complete indoor presentation set, our Build Your Own Indoor State Flag Set program allows you to select a durable nylon indoor Vermont Flag and choose between premium quality poles, bases, and ornaments, and tassel. For indoor applications, most buyers choose a 3ft. x 5ft. flag with an 8ft. pole, however, if you have a low ceiling, you may opt for a 7ft. pole, which is designed to work with drop ceilings. If you are looking for a very substantial state flag display, our 4ft. x 6ft. indoor flags can be paired with a 9ft. pole for our largest indoor display option.

Our outdoor state flags are finished with a canvas header and brass grommets and are offered in five sizes: 2ft. x 3ft., 3ft. x 5ft., 4ft. x 6ft., 5ft. x 8ft., and 6ft. x 10ft., to fit any sized flagpole. Typically, outdoor flags are flown outside of government organizations and institutions on in-ground and wall-mount flagpoles, however, some people also buy these flags to display their state pride at home. If you are looking for a wall-mount Vermont flag set to display outside of your home, our Build Your Own Outdoor State Flag Set program will allow you to choose between premium quality 6ft. poles and brackets to display the Vermont Flag on your front porch. 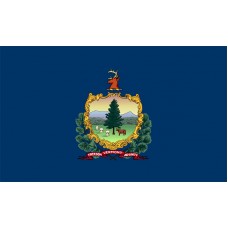 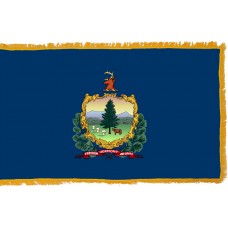 History of the Vermont Flag

The Vermont State Flag features a blue background with the Vermont Coat of Arms positioned prominently in the center. The coat of arms features a shield with a scene comprised of a pine tree on a green field with a cow and three sheaves of wheat in the foreground, and green mountains in the background. The shield is surrounded by gold filigree. A deer's head is positioned above the shield, sitting on top of a twisted gold and blue bar. The pine tree represents the Vermont forests, the cow represents Vermont's dairy industry, the three sheaves of wheat represent Vermont's agriculture, the deer's head represents the wildlife, and the green mountains represent Vermont's landscape. At the bottom of the shield is a red scroll with white writing that reads, "Freedom, Vermont, Unity." Beneath that are two pine branches that are crossed between the shield and the scroll. The pine branches around the shield pay homage to the pine branches worn by soldiers at the battle of Plattsburgh. The Vermont State Flag was adopted on June 1st, 1923.

Vermont is located in the New England Region of the United States and shares borders with Canada, New Hampshire, Massachusetts, and New York. The capital city is Montpelier and the largest city is Burlington. The majority of Vermont is covered by mountains and forests with the most famous mountain range being the Green Mountains. The name Vermont is derived from the French words "Vert" and "Mont" which translate as Green Mountain, and it is also referred to as "The Green Mountain State."

Vermont is considered to be the safest state in the United States of America. The state was inhabited for thousands of years by Native American tribes including the Abenaki, Mohican, Pennacook, Pocomtuc, and Massachusett. The first European to arrive to the area was the French explorer Samuel de Champlain, who named the mountains "vert mont" on his map in 1647 and claimed the area for France in 1609. In 1666, the first European settlement was established by the French which was "Fort Sainte Anne." In 1724, the British arrived and established the settlement "Fort Dummer." In 1754, the French and Indian War broke out between the French and the English who were both trying to gain control of the area. Both sides formed alliances with different Indian tribes. The French and Indian War ended in 1763, when the British defeated the French and gained control of Vermont.

In 1775, at the start of the Revolutionary War, Vermont joined as they sought independence and the "Green Mountain Boys" who were a group of Vermont Settlers were led by Ethan Allen to capture the British Fort Ticonderoga. In 1777, Vermont declared itself an independent republic and in January 1791, it officially became the 14th state (first state after the original thirteen colonies) of the United States of America.

We offer free images of the Vermont Flag in four sizes (small, medium, large, and high resolution). These images are distributed royalty free for both personal and educational use and are ideal for use in projects and on websites. If you choose to use one of our images, attribution is appreciated, but not required.

The following html code snippets can be copied and pasted to add an image of the Vermont State Flag to your website: