We carry authentic Massachusetts State Flags in both indoor and outdoor varieties. Our flags are proudly made in the United States from durable nylon and are printed with vibrant long-lasting inks. The Massachusetts state flag is often displayed at schools, government organizations, banks, and other institutions in the state, as well as at the homes of people who take great pride in their Massachusetts heritage.

Our indoor flags are finished with a pole hem and your choice of with or without golden fringe. Gold Fringe is the traditional way to display an indoor flag, however, some people choose without fringe for a simple and clean look that is also less expensive. If you are looking for a complete indoor presentation set, our Build Your Own Indoor State Flag Set program allows you to select a durable nylon indoor Massachusetts Flag and choose between premium quality poles, bases, and ornaments, and tassel. For indoor applications, most buyers choose a 3ft. x 5ft. flag with an 8ft. pole, however, if you have a low ceiling, you may opt for a 7ft. pole, which is designed to work with drop ceilings. If you are looking for a very substantial state flag display, our 4ft. x 6ft. indoor flags can be paired with a 9ft. pole for our largest indoor display option.

Our outdoor state flags are finished with a canvas header and brass grommets and are offered in five sizes: 2ft. x 3ft., 3ft. x 5ft., 4ft. x 6ft., 5ft. x 8ft., and 6ft. x 10ft., to fit any sized flagpole. Typically, outdoor flags are flown outside of government organizations and institutions on in-ground and wall-mount flagpoles, however, some people also buy these flags to display their state pride at home. If you are looking for a wall-mount Massachusetts flag set to display outside of your home, our Build Your Own Outdoor State Flag Set program will allow you to choose between premium quality 6ft. poles and brackets to display the Massachusetts Flag on your front porch. 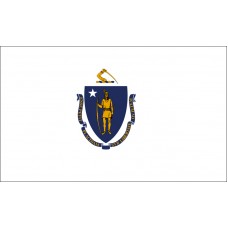 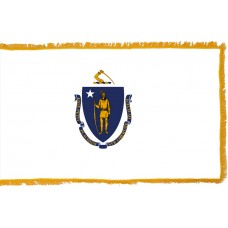 History of the Massachusetts Flag

The Massachusetts State Flag features a white background with the state's coat of arms emblazoned prominently in the center. The coat of arms is comprised of a blue shield with a gold-colored Native American man holding a bow in his left hand and an arrow pointing downwards in his right hand. The downward pointing arrow signifies peace. To the mans right is a white five-point star, representing Massachusetts as the sixth state to be admitted to the United States. Above the shield is a golden right arm, bent at the elbow holding a sword sitting on a twisted bar of blue and gold. Underneath the blue shield is a blue banner with gold writing that reads, "Ense Petit Placidam, Sub Libertate Quietem," which translates as "By the Sword We Seek Peace, But Peace Only Under Liberty." The imagery of the sword and Native American Man is designed to represent the meaning of this motto. The Massachusetts State Flag was officially adopted in 1901, however, it was unofficially used during the Revolutionary War.

Massachusetts is located in the New England Region of the United States of America, sharing borders with the Atlantic Ocean, Connecticut, New Hampshire, Vermont, Rhode Island, and New York. The capital and most populous city is Boston which is also one of the oldest cities in the United States of America. Massachusetts is referred to as, "The Bay State" as the earliest settlements were made in the area of the Cape Cod Bay. People that come from or live in Massachusetts are often referred to as, "Bay Staters."

The earliest inhabitants of Massachusetts were American Native Tribes including the Wampanoag, Narragansett, Nipmuc, Pocomtuc, Mahican, and Massachusett. The native people relied mainly on hunting, gathering, and fishing for sustenance, however, they also cultivated some crops. The first English settlers were the Pilgrims, who were puritans seeking religious freedom in the New World. They arrived in 1620 on an English ship called The Mayflower and established the Plymouth Colony. In 1629, more Puritans came to the New World and formed the Massachusetts Bay Colony in Boston. In 1691, the Massachusetts Bay Colony and the Plymouth Colony merged to form Massachusetts. As the colony and area grew, the British began to demand very high taxes from the colonists, which was met with protest and ultimately was one of the precursors to the Revolutionary War. The British sent more than 2,000 soldiers to occupy the city, which was home to only 16,000 colonists, to enforce the tax laws. This resulted in much conflict and culminated on March 5, 1770 in Boston, when a brawl between colonists and British soldiers broke out, resulting in five deaths. The Colonists rallied behind the motto, "No taxation without representation." Later, on December 16, 1773, colonists staged a protest where they dumped hundreds of chests of tea into the Boston Harbor in protest of the unfair taxation on the product. Eventually, the discord that developed between the two sides resulted in the Revolutionary War, which resulted in American victory and US independence from Britain. Following the Revolutionary War, Massachusetts officially became the 6th state of the United States of America on February 6th, 1788.

We offer free images of the Massachusetts Flag in four sizes (small, medium, large, and high resolution). These images are distributed royalty free for both personal and educational use and are ideal for use in projects and on websites. If you choose to use one of our images, attribution is appreciated, but not required.

The following html code snippets can be copied and pasted to add an image of the Massachusetts State Flag to your website: