We carry authentic Florida State Flags in both indoor and outdoor varieties. Our flags are proudly made in the United States from durable nylon and are printed with vibrant long-lasting inks. The Florida state flag is often displayed at schools, government organizations, banks, and other institutions in the state, as well as at the homes of people who take great pride in their Florida heritage.

Our indoor flags are finished with a pole hem and your choice of with or without golden fringe. Gold Fringe is the traditional way to display an indoor flag, however, some people choose without fringe for a simple and clean look that is also less expensive. If you are looking for a complete indoor presentation set, our Build Your Own Indoor State Flag Set program allows you to select a durable nylon indoor Florida Flag and choose between premium quality poles, bases, and ornaments, and tassel. For indoor applications, most buyers choose a 3ft. x 5ft. flag with an 8ft. pole, however, if you have a low ceiling, you may opt for a 7ft. pole, which is designed to work with drop ceilings. If you are looking for a very substantial state flag display, our 4ft. x 6ft. indoor flags can be paired with a 9ft. pole for our largest indoor display option.

Our outdoor state flags are finished with a canvas header and brass grommets and are offered in five sizes: 2ft. x 3ft., 3ft. x 5ft., 4ft. x 6ft., 5ft. x 8ft., and 6ft. x 10ft., to fit any sized flagpole. Typically, outdoor flags are flown outside of government organizations and institutions on in-ground and wall-mount flagpoles, however, some people also buy these flags to display their state pride at home. If you are looking for a wall-mount Florida flag set to display outside of your home, our Build Your Own Outdoor State Flag Set program will allow you to choose between premium quality 6ft. poles and brackets to display the Florida Flag on your front porch. 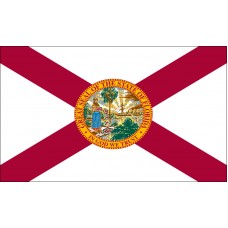 History of the Florida Flag

The Florida State Flag features a white background with a red diagonal cross (saltire) covering its entire height and width. The Seal of Florida is emblazoned over the center of the cross. The red cross most likely references the Confederate Flag, paying homage to the state's confederate history, however, some have suggested that it may also reference the Cross of Burgundy, which is a Spanish flag, symbolizing the states history under Spanish rule.

The Great Seal of Florida features a Native American woman scattering flowers upon a backdrop of a vibrant sunny day with a palm tree and a steamboat on the water. This scene is captured in a circular shaped frame, surrounded by the words, "Great Seal of the State of Florida * In God We Trust." The flowers represents Florida's tropical climate where many species of flowers thrive. The water represents the lakes, rivers, and oceans present in the state. This basic design of the Florida State Flag has been in place since November 6, 1900, however, there have been several changes to the state seal over the years. The current flag and seal where last updated on May 21st, 1985. Originally, the flag featured a cocoa tree and the Native American woman wore a headdress. The headdress was removed to be more historically accurate since only Native American men wore headdresses, and the tree was changed to a palm tree upon the palm tree being recognized as the state's official tree in 1953.

Florida is a Southeastern State in the United States of America that shares borders with Alabama, Georgia, the Atlantic Ocean, and the Straits of Florida. Florida is the only state that is a "Peninsula," meaning that it is surrounded by water on three sides. It is the fourth most populated state following New York, Texas, and California. The capital of Florida is Tallahassee and the largest city is Jacksonville. Florida is also referred to as "The Sunshine State," a reference to its beautiful tropical climate.

Florida was first inhabited approximately 14,000 years ago by American Native Tribes that included Timucua, Apalachee, Calusa, and Creek. The first European to arrive to Florida was the Spanish Conqueror, Ponce de Leon, who came in search for gold and silver. He was unsuccessful, but did discover the fertile farmland and coastline. Ponce de Leon named Florida "La Florida" which translated as "Place of Flowers," in honor of the various, colorful, beautiful, and blooming flowers he encountered in the state.

Following Ponce de Leon's arrival to Florida, the Spanish began to establish settlements which included St. Augustine in 1965, which is one of the oldest occupied European settlements in the Continental United States of America. Shortly after the Spanish settlements, the English arrived and began settling in the North and the French began settling in the West. In 1672, the English attacked the city of St. Augustine. The Spanish responded by building "Castillo de San Marcos," which is the oldest fort in the Continental USA as well as "Fort Matanzas" which is now a national monument. In 1763, the British recaptured control of Florida from the Spanish.  In exchange, Britian handed over control of Havana, Cuba to Spain. In 1783, Spain regained control of Florida following the Britain's defeat in the Revolutionary War until 1821, when Spain relinquished control of Florida to the United States of America.

We offer free images of the Florida Flag in four sizes (small, medium, large, and high resolution). These images are distributed royalty free for both personal and educational use and are ideal for use in projects and on websites. If you choose to use one of our images, attribution is appreciated, but not required.

The following html code snippets can be copied and pasted to add an image of the Florida State Flag to your website: