We carry authentic West Virginia State Flags in both indoor and outdoor varieties. Our flags are proudly made in the United States from durable nylon and are printed with vibrant long-lasting inks. The West Virginia state flag is often displayed at schools, government organizations, banks, and other institutions in the state, as well as at the homes of people who take great pride in their West Virginia heritage.

Our indoor flags are finished with a pole hem and your choice of with or without golden fringe. Gold Fringe is the traditional way to display an indoor flag, however, some people choose without fringe for a simple and clean look that is also less expensive. If you are looking for a complete indoor presentation set, our Build Your Own Indoor State Flag Set program allows you to select a durable nylon indoor West Virginia Flag and choose between premium quality poles, bases, and ornaments, and tassel. For indoor applications, most buyers choose a 3ft. x 5ft. flag with an 8ft. pole, however, if you have a low ceiling, you may opt for a 7ft. pole, which is designed to work with drop ceilings. If you are looking for a very substantial state flag display, our 4ft. x 6ft. indoor flags can be paired with a 9ft. pole for our largest indoor display option.

Our outdoor state flags are finished with a canvas header and brass grommets and are offered in five sizes: 2ft. x 3ft., 3ft. x 5ft., 4ft. x 6ft., 5ft. x 8ft., and 6ft. x 10ft., to fit any sized flagpole. Typically, outdoor flags are flown outside of government organizations and institutions on in-ground and wall-mount flagpoles, however, some people also buy these flags to display their state pride at home. If you are looking for a wall-mount West Virginia flag set to display outside of your home, our Build Your Own Outdoor State Flag Set program will allow you to choose between premium quality 6ft. poles and brackets to display the West Virginia Flag on your front porch. 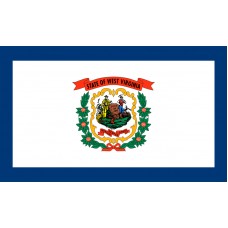 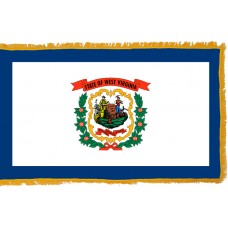 History of the West Virginia Flag

The West Virginia State Flag features a white background with a thick blue border around the edges. The Virginia State Coat of Arms is featured prominently in the center of the flag. The central feature of the coat of arms is a boulder surrounded by ivy with bold black text emblazoned upon it that reads, "June 20 1863," the date of the state's formation. Standing on the left side of the rock is a farmer wearing hunting gear who is holding an axe and a plow handle. A corn stalk and sheaf of wheat are placed to the left of the farmer. This imagery represents the agricultural history of the state and the axe demonstrates the rugged undeveloped terrain that farmers cultivated. On the right side of the rock is a miner holding a pick-axe. To the right of the miner is and anvil and a sledge hammer as well as a barrel and mineral lumps. The mining imagery represents the prominent mining industry in the sate. Underneath these figures are two crossed hunting rifles with a liberty cap placed on top, which is symbolic of the use of force to achieve freedom. At the bottom of the seal is a red banner that reads, "Montani Semper Liberi," the state motto, which translates as "mountaineers are always free." A second red banner above the seal reads, "State of West Virginia" in bold black capitalized text. The coat of arms is surrounded by a wreath of Rhododendrons, which are the state flower. The white color of the flag represents purity, while the blue color pays homage to the United States of America. The current design of the West Virginia State flag was adopted by the West Virginia State Legislature on March 7th, 1962 after a redesign, which sought so simplify the previous design which had different printing on both sides and proved too complex and expensive to manufacture.

West Virginia is located in the Appalachian Region of the Southern United States of America and shares borders with Ohio, Pennsylvania, Maryland, Virginia, and Kentucky. The capital and largest city of West Virginia is Charleston. West Virginia's name is derived from Elizabeth I of England, who was nicknamed "The Virgin Queen." The state was originally going to be called "Kanawha" after the Kanawha River, however, the name Virginia was ultimately chosen to pay homage to the states history as part of Virginia. West Virginia is nicknamed, "The Mountain State" since it is the only state that lies totally within the Appalachian Mountain region.

West Virginia was originally inhabited by the Paleo-Indians and Adena people. Native American tribes soon followed which included the Shawnee, Cherokee, and Iroquois. The most prevalent tribe was the Shawnee. In 1606, the land that comprises West Virginia was part of the Virginia Colony that the British established. In 1607, Jamestown was established, and Virginia was beginning to get settled.

The land that comprises Weste Virginia is very mountainous and therefore was considered a fronteir which did not begin to become settled until the 1700s. The first settlement was New Mecklenburg in 1726. In 1762, New Mecklenburg became Shepherdstown, which is now the oldest town in West Virginia. During the Revolutionary War, West Virginia wanted to break from the Virginia Colony and become its own state; it had been separated from Virginia by the mountains and was always seen as different, culturally and economically. West Virginia gained statehood on June 20th, 1863, becoming the 35th state of the United States of America.

We offer free images of the West Virginia Flag in four sizes (small, medium, large, and high resolution). These images are distributed royalty free for both personal and educational use and are ideal for use in projects and on websites. If you choose to use one of our images, attribution is appreciated, but not required.

The following html code snippets can be copied and pasted to add an image of the West Virginia State Flag to your website: