We carry authentic Utah State Flags in both indoor and outdoor varieties. Our flags are proudly made in the United States from durable nylon and are printed with vibrant long-lasting inks. The Utah state flag is often displayed at schools, government organizations, banks, and other institutions in the state, as well as at the homes of people who take great pride in their Utah heritage.

Our indoor flags are finished with a pole hem and your choice of with or without golden fringe. Gold Fringe is the traditional way to display an indoor flag, however, some people choose without fringe for a simple and clean look that is also less expensive. If you are looking for a complete indoor presentation set, our Build Your Own Indoor State Flag Set program allows you to select a durable nylon indoor Utah Flag and choose between premium quality poles, bases, and ornaments, and tassel. For indoor applications, most buyers choose a 3ft. x 5ft. flag with an 8ft. pole, however, if you have a low ceiling, you may opt for a 7ft. pole, which is designed to work with drop ceilings. If you are looking for a very substantial state flag display, our 4ft. x 6ft. indoor flags can be paired with a 9ft. pole for our largest indoor display option.

Our outdoor state flags are finished with a canvas header and brass grommets and are offered in five sizes: 2ft. x 3ft., 3ft. x 5ft., 4ft. x 6ft., 5ft. x 8ft., and 6ft. x 10ft., to fit any sized flagpole. Typically, outdoor flags are flown outside of government organizations and institutions on in-ground and wall-mount flagpoles, however, some people also buy these flags to display their state pride at home. If you are looking for a wall-mount Utah flag set to display outside of your home, our Build Your Own Outdoor State Flag Set program will allow you to choose between premium quality 6ft. poles and brackets to display the Utah Flag on your front porch. 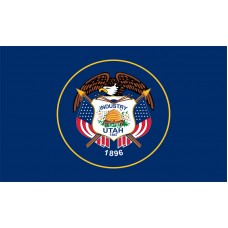 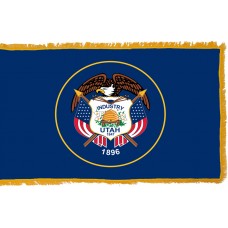 History of the Utah Flag

The Utah State Flag features a dark blue background with the Utah coat of arms placed prominently in the center inside of a golden circle. The coat of arms features a white shield with a beehive in the center. The beehive represents hard work and is the official emblem of Utah. Above the beehive, the word "industry," Utah's state motto, is emblazoned and beneath the beehive, the word, "Utah" and the year "1847" are printed. 1847 is the year that Mormon explorers reached and began settling in Utah. Sego Lillies are placed on each side of the beehive, representing peace. Behind the shield, two criss-crossing American flags are featured flying on poles with a spear on top. The flags are designed to look like they are waving and are oriented such that only a small portion of each flag peaks out on either side of the shield. An American bald eagle is perched on top of the shield with his wings spread wide while clutching several arrows. The American Flags and the bald eagle are symbols of the United States and symbolize Utah's allegiance and loyalty to the country. The arrows in the eagles clutches represent the power of the United States as a protector of Utah. Underneath the coat of arms, the year, "1896" is emblazoned in white, referencing the year that Utah officially became a state. The current Utah State flag was adopted in 1913 and modified on February 16th, 2011 to replace a mistake which had been replicate for years of the misplacement of the year, "1847" at the bottom of the flag rather than in the seal.

Utah is located in the Western region of the United States of America and shares borders with Idaho, Wyoming, Colorado, Arizona, Nevada, and New Mexico. The capital city is Salt Lake City. The name Utah is derived from the word "Ute" which translates as "people of the mountains." Utah is also referred to as "The Beehive State." Beehives are a very important Mormon symbol, signifying industry, thrift and perseverance.

Utah was inhabited for thousands of years by Native tribes including the Shoshone, Paiute, Goshute, Navajo, and Ute. The first European to arrive to the area was Francisco Vasquez de Coronado in 1540 but the land was not claimed until 1765 when Juan Antonio de Rivera claimed it for Spain. In 1847, following the murder of their leader Joseph Smith in 1844, the religious group, the Mormons, chose to move to Utah as there were not many people that lived there. Approximately 148 Mormons settled in Salt Lake Valley and named it Great Salt Lake City. One year later, 1,650 Mormons had arrived and more settlements were established which included Ogden, Provo, and Farmington. By 1850, there were approximately 11,000 Mormons in the area and they named the land the "State of Deseret." Following the Mexican-American war, the United States of America gained control of Utah and the "State of Deseret" became the "Utah Territory." Utah officially became the 45th state of the United States of America on April 1st, 1896.

We offer free images of the Utah Flag in four sizes (small, medium, large, and high resolution). These images are distributed royalty free for both personal and educational use and are ideal for use in projects and on websites. If you choose to use one of our images, attribution is appreciated, but not required.

The following html code snippets can be copied and pasted to add an image of the Utah State Flag to your website: