We carry authentic Washington, D.C. Flags in both indoor and outdoor varieties. Our flags are proudly made in the United States from durable nylon and are printed with vibrant long-lasting inks. The District of Columbia flag is often displayed at schools, government organizations, banks, and other institutions in the territory, as well as at the homes of people who take great pride in their Washington, D.C. heritage.

Our indoor flags are finished with a pole hem and your choice of with or without golden fringe. Gold Fringe is the traditional way to display an indoor flag, however, some people choose without fringe for a simple and clean look that is also less expensive. If you are looking for a complete indoor presentation set, our Build Your Own Indoor State Flag Set program allows you to select a durable nylon indoor District of Columbia Flag and choose between premium quality poles, bases, and ornaments, and tassel. For indoor applications, most buyers choose a 3ft. x 5ft. flag with an 8ft. pole, however, if you have a low ceiling, you may opt for a 7ft. pole, which is designed to work with drop ceilings. If you are looking for a very substantial flag display, our 4ft. x 6ft. indoor flags can be paired with a 9ft. pole for our largest indoor display option.

Our outdoor flags are finished with a canvas header and brass grommets and are offered in five sizes: 2ft. x 3ft., 3ft. x 5ft., 4ft. x 6ft., 5ft. x 8ft., and 6ft. x 10ft., to fit any sized flagpole. Typically, outdoor flags are flown outside of government organizations and institutions on in-ground and wall-mount flagpoles, however, some people also buy these flags to display their D.C. pride at home. If you are looking for a wall-mount Washington, D.C. flag set to display outside of your home, our Build Your Own Outdoor State Flag Set program will allow you to choose between premium quality 6ft. poles and brackets to display the District of Columbia Flag on your front porch. 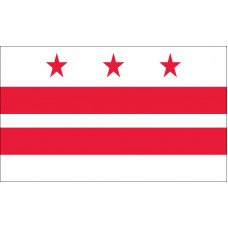 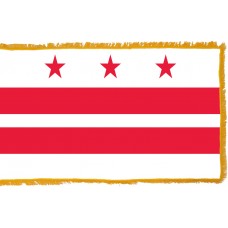 History of the Washington, D.C. Flag

The District of Columbia flag features a white background with two thick horizontal red stripes running across it. Above the top stripe is three red five-point stars. This design was created by Charles A. R. Dunn and is based on George Washington's Coat of Arms. Dunn was an illustrator from Washington, DC who became interested in the Washington, DC flag when he worked as an engraver on the 1917 issue of National Geographic Magazine entitled, "Our Flag Number." This magazine issue contained 1497 illustrations of flags from around the world. Because Washington DC had no official flag, The DC National Guard flag was featured in its place, which Dunn found to be unsatisfactory.

Years later, this issue stayed with him, and Dunn created a drawing of his proposed Washington DC flag, which he sent to the Washington Evening Star newspaper in 1924. Dunn was inspired by the Maryland State flag, whose design was based on the Coat of Arms of Lord Baltimore. He preferred bold designs which reflected the states history's rather than the common state flag designs which include a blue background with the state's seal featured prominently in the center.

More than a decade later, a flag contest was announced to select a design for the Washington DC Flag. Several other designs were submitted, however, on October 15, 1938, Charles A. R. Dunn's dream of creating the Washington DC Flag was realized when the Flag Commission and Fine Arts Commission held a joint meeting, where Dunn's design was selected as the winner.

The District of Columbia is considered a territory of the United States and is commonly known as to as Washington D.C. Washington DC is the capital city of the United States, created to serve as the "government seat." Prior to its creation, the 13 Northern and Southern states wanted a capital that could represent all the states equally without bias. George Washington chose an area between Maryland and Virginia. The first piece of land was donated by Virginia (South of the Potomac River) and a second piece of land was donated by Maryland (North of the Potomac River). In 1847, Virginia's piece of land (known as Alexandria D.C) was returned and is now known as Arlington County. Since 1847, Washington D.C has been located on the North side of the river. Before Washington D.C. was built, it was designed and planned by Pierre L'Enfant who included many streets, parks and important buildings in the plan. Washington D.C officially joined the United States of America on July 16th, 1970. Washington is named in honor of George Washington and D.C (District of Columbia) was named in honor of Christopher Columbus. Washington D.C is referred to as "Our Nation's Capital" and sometimes known as the "political capital of the world." Prior to its creation, New York, Anneapolis, and Philadelphia all served as previous capitals of the country.

Washington D.C is one of the most popular tourist destinations in America with approximately 22 million visitors per year. It is visited mainly for its famous landmarks which include, The Lincoln Memorial, Washington Monument, and Jefferson Memorial. The Lincoln Memorial was built between 1914-1922 to honor Abraham Lincoln, the 16th president of the United States. The Washington Monument commemorated George Washington who was a very successful general in the US Army and served as the first president of the United States. The Washington Monument was constructed during the period between 1848-1884. Today, it is still one of the tallest stone structures in the world. The Jefferson Memorial was designed in 1925 and bears a strong resemblance to the Pantheon in Rome; the structure was built in honor of Thomas Jefferson, the third president of the United States. The "Old Stone House" in Washington D.C is another popular tourist destination, which is a stone cottage that was built in 1765 and is the oldest structure in Washington D.C. that is still supported by its original foundation.

We offer free images of the Washington, DC Flag in four sizes (small, medium, large, and high resolution). These images are distributed royalty free for both personal and educational use and are ideal for use in projects and on websites. If you choose to use one of our images, attribution is appreciated, but not required.

The following html code snippets can be copied and pasted to add an image of the Washington, DC State Flag to your website: