We carry authentic Minnesota State Flags in both indoor and outdoor varieties. Our flags are proudly made in the United States from durable nylon and are printed with vibrant long-lasting inks. The Minnesota state flag is often displayed at schools, government organizations, banks, and other institutions in the state, as well as at the homes of people who take great pride in their Minnesota heritage.

Our indoor flags are finished with a pole hem and your choice of with or without golden fringe. Gold Fringe is the traditional way to display an indoor flag, however, some people choose without fringe for a simple and clean look that is also less expensive. If you are looking for a complete indoor presentation set, our Build Your Own Indoor State Flag Set program allows you to select a durable nylon indoor Minnesota Flag and choose between premium quality poles, bases, and ornaments, and tassel. For indoor applications, most buyers choose a 3ft. x 5ft. flag with an 8ft. pole, however, if you have a low ceiling, you may opt for a 7ft. pole, which is designed to work with drop ceilings. If you are looking for a very substantial state flag display, our 4ft. x 6ft. indoor flags can be paired with a 9ft. pole for our largest indoor display option.

Our outdoor state flags are finished with a canvas header and brass grommets and are offered in five sizes: 2ft. x 3ft., 3ft. x 5ft., 4ft. x 6ft., 5ft. x 8ft., and 6ft. x 10ft., to fit any sized flagpole. Typically, outdoor flags are flown outside of government organizations and institutions on in-ground and wall-mount flagpoles, however, some people also buy these flags to display their state pride at home. If you are looking for a wall-mount Minnesota flag set to display outside of your home, our Build Your Own Outdoor State Flag Set program will allow you to choose between premium quality 6ft. poles and brackets to display the Minnesota Flag on your front porch. 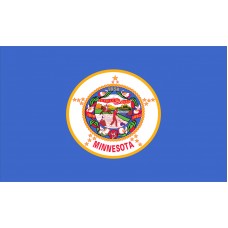 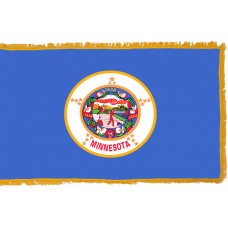 History of the Minnesota Flag

The Minnesota State flag features a blue background with the state's seal emblazoned upon the center. The blue color used on the flag is lighter than most other state flags, which typically reference the deep blue color of the US national flag. Minnesota is a Dakota word with translates as "sky colored waters," and therefore the flag is meant to represent this light sky blue color. The Seal features a Native American riding on horseback, representing the heritage of Minessota. A farmer plowing a field pays homage to Minnesota's agricultural industry. An axe embedded in a tree stump represents the history of the lumber industry in the state. A river and a waterfall are depicted which represent the Mississippi River and St. Anthony Falls, which were important transportation resources to Minnesota's economy. Three pine trees and the sun rising in the West pay homage to the three areas of the state (St. Croix, Mississippi, and Lake Superior) where pine trees flourish.

The state motto, "L'etoile du Nord," which translates as "Star of the North," is emblazoned in gold writing on a red banner above the scene. Surrounding all of this is a wreath interwoven with a red banner. In the red banner, two years, 1819 and 1893 are featured, while at the top is the year, 1858. 1858 is the year Minnesota became a state, 1819 is the year Fort Snelling was established, and 1893 is the year the original flag was adopted. The 19 stars on the outside wreath signify Minnesota as the 19th State to enter the union following the original 13 colonies; Minnesota is the 32nd state to be admitted to the United States. The largest star signifies the North Star, which is a reference to the state motto. The current Minnesota State Flag was adopted on August 2nd, 1983.

Minnesota is located in the Upper Midwest and Northern Regions of the United States of America. It shares borders with Canada, Iowa, Lake Superior, Wisconsin, North Dakota, and South Dakota and is the 12th largest state. The capital city is Saint Paul while the largest city is Minneapolis. Saint Paul and Minneapolis are the two largest cities in the state and are located on opposite sides of the Missisippi River, which has earned them the nickname, "The Twin Cities." Minnesota is known as "The North Star State," a reference to the state motto (L'etoile du Nord).

Minnesota was originally inhabited by ancient cultures which included the Woodland people and the Mississippian culture as well as Native American tribes that included Ojibwa, Cree, Cheyenne, and Dakota Sioux (which was the largest tribe). The first Europeans to explore the area were Frenchmen Pierre Radisson and Medard des Groseilleirs during the 1650s who claimed the area for France.

In 1762, Minnesota became part of the Spanish Louisiana. Following the Revolutionary War in 1783, a portion of the Mississippi River (East side) became part of the United States of America and in 1803, the US government purchased the rest of Minnesota from France in the Louisiana purchase. The first major American military fortification was Fort Snelling which was completed in 1825. Minnesota became an official state of the United States of America on May 11th, 1858.

We offer free images of the Minnesota Flag in four sizes (small, medium, large, and high resolution). These images are distributed royalty free for both personal and educational use and are ideal for use in projects and on websites. If you choose to use one of our images, attribution is appreciated, but not required.

The following html code snippets can be copied and pasted to add an image of the Minnesota State Flag to your website: