We carry authentic Arkansas State Flags in both indoor and outdoor varieties. Our flags are proudly made in the United States from durable nylon and are printed with vibrant long-lasting inks. The Arkansas state flag is often displayed at schools, government organizations, banks, and other institutions in the state, as well as at the homes of people who take great pride in their Arkansas heritage.

Our indoor flags are finished with a pole hem and your choice of with or without golden fringe. Gold Fringe is the traditional way to display an indoor flag, however, some people choose without fringe for a simple and clean look that is also less expensive. If you are looking for a complete indoor presentation set, our Build Your Own Indoor State Flag Set program allows you to select a durable nylon indoor Arkansas Flag and choose between premium quality poles, bases, and ornaments, and tassel. For indoor applications, most buyers choose a 3ft. x 5ft. flag with an 8ft. pole, however, if you have a low ceiling, you may opt for a 7ft. pole, which is designed to work with drop ceilings. If you are looking for a very substantial state flag display, our 4ft. x 6ft. indoor flags can be paired with a 9ft. pole for our largest indoor display option.

Our outdoor state flags are finished with a canvas header and brass grommets and are offered in five sizes: 2ft. x 3ft., 3ft. x 5ft., 4ft. x 6ft., 5ft. x 8ft., and 6ft. x 10ft., to fit any sized flagpole. Typically, outdoor flags are flown outside of government organizations and institutions on in-ground and wall-mount flagpoles, however, some people also buy these flags to display their state pride at home. If you are looking for a wall-mount Arkansas flag set to display outside of your home, our Build Your Own Outdoor State Flag Set program will allow you to choose between premium quality 6ft. poles and brackets to display the Arkansas Flag on your front porch. 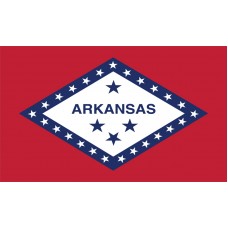 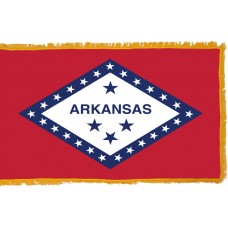 History of the Arkansas Flag

The Arkansas Flag features a red background with a large white diamond in the center surrounded by a thick blue border. Inside the blue border are 25 white stars. In the center of the diamond, is bold text that reads, "Arkansas." Above the word, "Arkansas" is one blue star and beneath the word is three blue stars in a triangle pattern. All of the stars are 5-point stars, with the top point reaching upwards, except the bottom star, which reaches downwards.

In 1912 the Pine Bluff chapter of the Daughters of the American Revolution sought to present an Alabama State Flag to celebrate the newly commissioned battle ship, USS Arkansas and was dismayed, when they reached out to Alabama Secretary of State, Earle W. Hodges, who informed them that the state had no official flag. After learning of this, the organization began a campaign to create a state flag. Earle Hodges agreed and created a committee to review submissions. Newspaper advertisements were placed, soliciting designs for the new flag and 65 submissions were received. Mrs. Willie Kavanaugh Hocker who was coincidentally a member of the Pine Bluff chapter of the Daughters of the American Revolution submitted the winning design which was very similar to the current Arkansas flag, however, the diamond contained only 3 blue stars in a straight line and did not contain the word, " Arkansas." The committee requested the addition of the word, "Arkansas," so Mrs. Hocker rearranged the three blue stars, placing one above the word and two below.

The Red, White, and Blue colors used on the flag pay homage to the official colors of the United States, while the diamond formation in the center of the flag symbolizes the fact that Arkansas was home to the only diamond in the country at the time. The 25 stars around the border signify Arkansas as the 25th state to be admitted to the union. The three original stars represented three different symbolic meanings:

In 1923, the Arkansas State Legislature voted to add a fourth blue star to the flag to represent the fourth country which ruled over the state, the "Confederate States of America." The additional star was added above the word, "Arkansas," and the other three stars were moved beneath the word.

Arkansas is a Southeastern state that shares borders with Louisiana, Texas, Oklahoma, Missouri, Mississippi, and Tennessee. The capital city and most populated city is Little Rock, whose name is derived from "La Petite Roche" which is a rock formation along the river. The name Arkansas is derived from the word "Arkansa" which described one of the early tribes in the area called the Quapaws. Arkansas translates as "Southwind."

Arkansas has acquired many nicknames throughout its history including, the "Bear State," the "Toothpick State," the "Wonder State," the "Land of Opportunity" and the "Natural State." The nickname, "The Bear State" pays homage to the large population of Louisiana black bears in the first half of the 19th century, while the "Toothpick State" nickname references the early custom of men who carried sheathes or belt-knives. The "Wonder State," was a nickname coined by Governor Charles H. Brough in his writings about about the beautiful sights and attractions he observed as he traveled throughout the state. The nickname, "Land of opportunity" was introduced in the early 1940s when a group of business men called, "The committee of 100" were trying to promote economic development and created the catch phrase to describe the state. Finally, the nickname, the "Natural State" was coined in 1980 when the Parks System in Arizona was trying to promote the state to highlight the beautiful and diverse landscape.

The Louisiana Purchase in 1803 made Arkansas a part of the United States. Arkansas became its own territory in 1819 and became an official US State in 1836.

We offer free images of the Arkansas Flag in four sizes (small, medium, large, and high resolution). These images are distributed royalty free for both personal and educational use and are ideal for use in projects and on websites. If you choose to use one of our images, attribution is appreciated, but not required.

The following html code snippets can be copied and pasted to add an image of the Arkansas State Flag to your website: