We carry authentic Kentucky State Flags in both indoor and outdoor varieties. Our flags are proudly made in the United States from durable nylon and are printed with vibrant long-lasting inks. The Kentucky state flag is often displayed at schools, government organizations, banks, and other institutions in the state, as well as at the homes of people who take great pride in their Kentucky heritage.

Our indoor flags are finished with a pole hem and your choice of with or without golden fringe. Gold Fringe is the traditional way to display an indoor flag, however, some people choose without fringe for a simple and clean look that is also less expensive. If you are looking for a complete indoor presentation set, our Build Your Own Indoor State Flag Set program allows you to select a durable nylon indoor Kentucky Flag and choose between premium quality poles, bases, and ornaments, and tassel. For indoor applications, most buyers choose a 3ft. x 5ft. flag with an 8ft. pole, however, if you have a low ceiling, you may opt for a 7ft. pole, which is designed to work with drop ceilings. If you are looking for a very substantial state flag display, our 4ft. x 6ft. indoor flags can be paired with a 9ft. pole for our largest indoor display option.

Our outdoor state flags are finished with a canvas header and brass grommets and are offered in five sizes: 2ft. x 3ft., 3ft. x 5ft., 4ft. x 6ft., 5ft. x 8ft., and 6ft. x 10ft., to fit any sized flagpole. Typically, outdoor flags are flown outside of government organizations and institutions on in-ground and wall-mount flagpoles, however, some people also buy these flags to display their state pride at home. If you are looking for a wall-mount Kentucky flag set to display outside of your home, our Build Your Own Outdoor State Flag Set program will allow you to choose between premium quality 6ft. poles and brackets to display the Kentucky Flag on your front porch. 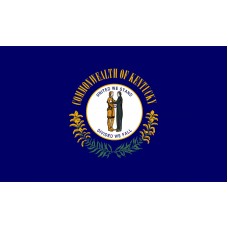 History of the Kentucky Flag

The Kentucky State Flag features a dark blue background with the seal of Kentucky emblazoned upon the center. The words, "The Commonwealth of Kentucky" are featured in gold in an arched shape above the seal and beneath the seal are two sprigs of the state flower, goldenrod, in bloom.

The seal of Kentucky features a man dressed in buckskin shaking hands with a man dressed in a suit. This image is surrounded by the state motto, "United We Stand, Divided We Fall." The man wearing buckskin is symbolic of all frontiersmen, while the well-dressed man represents statesmen. The two men are embodying the state motto, which is derived from the lyrics of "The Liberty Song," a popular patriotic song during the Revolutionary War period. The Kentucky state flag was adopted on March 26th, 1918. When Kentucky was admitted as the 15th State in the US in 1792, it was the westernmost state in the country. The depiction of the frontiersman on the flag is representative of the rugged individuals who navigated the Appalachian mountains to reach Kentucky in search of opportunities.

Kentucky (officially known as the "Commonwealth of Kentucky"), is located in the East South-Central region of the United States of America. It shares borders with West Virginia, Virginia, Tennessee, Missouri, Illinois, Indiana, and Ohio. The capital city of Kentucky is Frankfort. Kentucky falls within three major geographical regions: The Appalachian Highlands, the Interior Lowlands, and the Coastal Plain. Kentucky is also referred to as "The Bluegrass State," after a unique species of grass which is called, "bluegrass," that grows on lawns and pastures throughout the state.

Kentucky was originally inhabited by indigenous agricultural and hunting cultures. The earliest recorded Native American tribes to inhabit the area include, the Shawnee, Cherokee, and Delaware. The Appalachian Mountains with border Kentucky, have always presented difficulty to explorers and individuals seeking to reach Kentucky from the east. In 1750, British explorer, however, Thomas Walker, discovered a passage through the mountains (known as the Cumberland Gap). Following the French and Indian War in 1783, the British promised the Native Americans that they would not attempt to settle the area of Kentucky that passed the mountains, however, they gradually began to settle anyway.

The first permanent European settlement in Kentucky was Harrodsburg, which was established by James Harrods in 1774 and has been recognized as the oldest city in Kentucky and the oldest permanent settlement west of the Appalachian Mountains in the United States. As Europeans began to settle in the area, they began building homes on hunting grounds, which was vehemently opposed by the Shawnee and was a great source of conflict between the two groups. Eventually, war broke out between Virginia and the Shawnee Tribe, when the governor of Virginia, Lord Dunmore declared war against them and subsequently defeated them at the Battle of Point Pleasant. The result of of the war was an agreement between the Shawnee tribe and the settlers of Kentucky to use the Ohio River as a border. In 1775, Daniel Boone and his settlers established the town of "Boonesborough." They also expanded the "Cumberland Gap" to enable wagons to travel through more easily. This new trail earned the nickname, "The Wilderness Road." After the American Revolutionary War, Kentucky became a part of Virginia until it applied for its own statehood and on June 1st, 1792, Kentucky became the 15th official state of the United States of America.

We offer free images of the Kentucky Flag in four sizes (small, medium, large, and high resolution). These images are distributed royalty free for both personal and educational use and are ideal for use in projects and on websites. If you choose to use one of our images, attribution is appreciated, but not required.

The following html code snippets can be copied and pasted to add an image of the Kentucky State Flag to your website: