We carry authentic Oklahoma State Flags in both indoor and outdoor varieties. Our flags are proudly made in the United States from durable nylon and are printed with vibrant long-lasting inks. The Oklahoma state flag is often displayed at schools, government organizations, banks, and other institutions in the state, as well as at the homes of people who take great pride in their Oklahoma heritage.

Our indoor flags are finished with a pole hem and your choice of with or without golden fringe. Gold Fringe is the traditional way to display an indoor flag, however, some people choose without fringe for a simple and clean look that is also less expensive. If you are looking for a complete indoor presentation set, our Build Your Own Indoor State Flag Set program allows you to select a durable nylon indoor Oklahoma Flag and choose between premium quality poles, bases, and ornaments, and tassel. For indoor applications, most buyers choose a 3ft. x 5ft. flag with an 8ft. pole, however, if you have a low ceiling, you may opt for a 7ft. pole, which is designed to work with drop ceilings. If you are looking for a very substantial state flag display, our 4ft. x 6ft. indoor flags can be paired with a 9ft. pole for our largest indoor display option.

Our outdoor state flags are finished with a canvas header and brass grommets and are offered in five sizes: 2ft. x 3ft., 3ft. x 5ft., 4ft. x 6ft., 5ft. x 8ft., and 6ft. x 10ft., to fit any sized flagpole. Typically, outdoor flags are flown outside of government organizations and institutions on in-ground and wall-mount flagpoles, however, some people also buy these flags to display their state pride at home. If you are looking for a wall-mount Oklahoma flag set to display outside of your home, our Build Your Own Outdoor State Flag Set program will allow you to choose between premium quality 6ft. poles and brackets to display the Oklahoma Flag on your front porch. 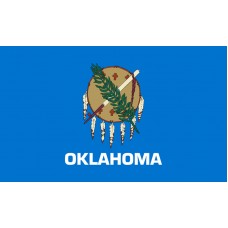 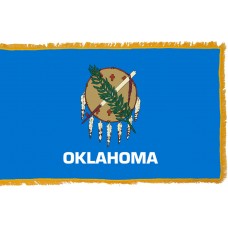 History of the Oklahoma Flag

The Oklahoma State Flag features a sky-blue background with a central pictorial emblem. The central emblem is comprised of a brown circle which is representative of an Osage Nation buffalo-skin shield with seven eagle feathers hanging off of the bottom. Inside of the shield is a Native American Peace Pipe and an olive branch, which is a European symbol of peace. The two symbols are positioned to form a diagonal cross, representing peace across cultures. Six golden-brown crosses are positioned on the shield. The crosses represent stars in Native American cultures, which symbolize high hopes. The blue background is the same color used on the background of the Choctaw Nation flag that was flown by Native American soldiers during the civil war. Underneath the emblem is the word OKLAHOMA in bold white text. The flag was designed by Louise Fluke, who won a competition organized by the Daughters of the American Revolution (DAR) to redesign the flag in 1924. Louise studied Oklahoma's history and created her strongly Native American based design. This design was adopted by the Oklahoma state legislature on March 25th, 1926.

Oklahoma is the 20th largest state in the United States of America. It is situated in the south-central part of the country, and is bordered by the Red River to the south. The name Oklahoma is a composite of the Choctaw words "okla" and "humma," which translates to Red People. Oklahoma is a landlocked state, bordered by Colorado, Kansas, Missouri, Arkansas, Texas, and New Mexico. Its capital and largest city is Oklahoma City, which is located almost directly in the center of the state. Its other major city is Tulsa, in the north eastern part of the state. The state straddles the Cross Timbers, Great Plains, and US Interior Highland regions and is very vulnerable to extreme weather conditions.

In 1803, what is now Oklahoma was part of the Louisiana Purchase, where the USA bought all French territories west of the Mississippi River. It was then part of what the USA called the Arkansas Territory. As its state flag suggests, Oklahoma was home to many Native American tribes. One of the most important was the Choctaw Nation, who were forced off of much of their ancestral lands due to the expansion of the United States. Oklahoma became the 46th state of the United States on November 16th, 1907. The state is admired by tourists for its western mountain ranges, central mesas, and eastern forests. Oklahoma a historic and diverse state, both culturally and geographically.

We offer free images of the Oklahoma Flag in four sizes (small, medium, large, and high resolution). These images are distributed royalty free for both personal and educational use and are ideal for use in projects and on websites. If you choose to use one of our images, attribution is appreciated, but not required.

The following html code snippets can be copied and pasted to add an image of the Oklahoma State Flag to your website: