We carry authentic Illinois State Flags in both indoor and outdoor varieties. Our flags are proudly made in the United States from durable nylon and are printed with vibrant long-lasting inks. The Illinois state flag is often displayed at schools, government organizations, banks, and other institutions in the state, as well as at the homes of people who take great pride in their Illinois heritage.

Our indoor flags are finished with a pole hem and your choice of with or without golden fringe. Gold Fringe is the traditional way to display an indoor flag, however, some people choose without fringe for a simple and clean look that is also less expensive. If you are looking for a complete indoor presentation set, our Build Your Own Indoor State Flag Set program allows you to select a durable nylon indoor Illinois Flag and choose between premium quality poles, bases, and ornaments, and tassel. For indoor applications, most buyers choose a 3ft. x 5ft. flag with an 8ft. pole, however, if you have a low ceiling, you may opt for a 7ft. pole, which is designed to work with drop ceilings. If you are looking for a very substantial state flag display, our 4ft. x 6ft. indoor flags can be paired with a 9ft. pole for our largest indoor display option.

Our outdoor state flags are finished with a canvas header and brass grommets and are offered in five sizes: 2ft. x 3ft., 3ft. x 5ft., 4ft. x 6ft., 5ft. x 8ft., and 6ft. x 10ft., to fit any sized flagpole. Typically, outdoor flags are flown outside of government organizations and institutions on in-ground and wall-mount flagpoles, however, some people also buy these flags to display their state pride at home. If you are looking for a wall-mount Illinois flag set to display outside of your home, our Build Your Own Outdoor State Flag Set program will allow you to choose between premium quality 6ft. poles and brackets to display the Illinois Flag on your front porch. 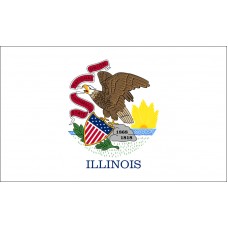 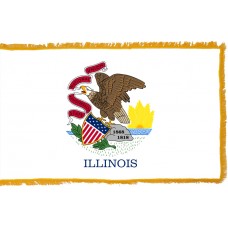 History of the Illinois Flag

The Illinois State Flag features a white background with the seal of Illinois featured prominently in the center of the flag. Underneath the seal is bold blue text reading, "Illinois." The Illinois Seal features a bald eagle with a red scroll in his mouth, perched upon a rock inscribed with the years, "1818" and "1868." The red scroll is emblazoned in black with the Illinois state motto, " State, Sovereignty, National Union." The eagle is holding a shield with thirteen alternating red and white stripes underneath a field of blue with thirteen white stars. The backdrop of the scene is a sunny day in front of a body of water.

The bald eagle pays homage to the National symbol of the United States and also represents the sovereignty of Illinois, while the thirteen stripes and stars on the shield represent the thirteen original colonies and reference the American Flag. The dates emblazoned on the rock refer to the year Illinois became a state (1818), and the date the seal was officially adopted (1868).

Illinois is located in the Midwestern region of the United States, bordering Wisconsin, Iowa, Missouri, Kentucky, Indiana, and Michigan. The capital city is Springfield, while the most populous city is Chicago. Illinois is comprised of three major regions: The Central Plains, the Shawnee Hills, and the Gulf Coastal Plain, each of which has unique topographical features. The Central Plains, which are rolling fertile plains make up 90% of Illinois. The Shawnee Hills are narrow strips of land in Southern Illinois with rivers and forests and the Gulf Coastal Plains are at the Southern tip and are hilly areas. Illinois is referred to as "The Prairie State," however, most of the prairies in the state have been destroyed due to urban development and agriculture; only about 10% of the original plains remain. During the third week of September every year, "Prairie Week" is celebrated to remind people and demonstrate the importance of preserving Illinois' ecosystem.

The first inhabitants of Illinois are thought to have been Native Americans who lived along the waterways for approximately 7,000 years until the French explorers, Louis Jolliet and Jacques Marquette became the first Europeans to reach the area, which they discovered and settled in 1673. Following the French and Indian war, the area was controlled by the British and after the American Revolutionary War, Illinois became a territory of the United States of America. Illinois officially became the 21st State in 1818.

Illinois is home to "Lake Michigan," one of the great likes that it shares with Wisconsin, Indiana and Michigan. It is also home to the "Willis Tower" which is a skyscraper that was completed in 1973 and was the tallest building in the world.

Land of Lincoln, The Prairie State

We offer free images of the Illinois Flag in four sizes (small, medium, large, and high resolution). These images are distributed royalty free for both personal and educational use and are ideal for use in projects and on websites. If you choose to use one of our images, attribution is appreciated, but not required.

The following html code snippets can be copied and pasted to add an image of the Illinois State Flag to your website: