We carry authentic Alaska State Flags in both indoor and outdoor varieties. Our flags are proudly made in the United States from durable nylon and are printed with vibrant long-lasting inks. The Alaska state flag is often displayed at schools, government organizations, banks, and other institutions in the state, as well as at the homes of people who take great pride in their Alaska heritage.

Our indoor flags are finished with a pole hem and your choice of with or without golden fringe. Gold Fringe is the traditional way to display an indoor flag, however, some people choose without fringe for a simple and clean look that is also less expensive. If you are looking for a complete indoor presentation set, our Build Your Own Indoor State Flag Set program allows you to select a durable nylon indoor Alaska Flag and choose between premium quality poles, bases, and ornaments, and tassel. For indoor applications, most buyers choose a 3ft. x 5ft. flag with an 8ft. pole, however, if you have a low ceiling, you may opt for a 7ft. pole, which is designed to work with drop ceilings. If you are looking for a very substantial state flag display, our 4ft. x 6ft. indoor flags can be paired with a 9ft. pole for our largest indoor display option.

Our outdoor state flags are finished with a canvas header and brass grommets and are offered in five sizes: 2ft. x 3ft., 3ft. x 5ft., 4ft. x 6ft., 5ft. x 8ft., and 6ft. x 10ft., to fit any sized flagpole. Typically, outdoor flags are flown outside of government organizations and institutions on in-ground and wall-mount flagpoles, however, some people also buy these flags to display their state pride at home. If you are looking for a wall-mount Alaska flag set to display outside of your home, our Build Your Own Outdoor State Flag Set program will allow you to choose between premium quality 6ft. poles and brackets to display the Alaska Flag on your front porch. 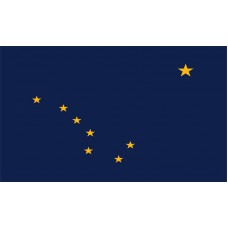 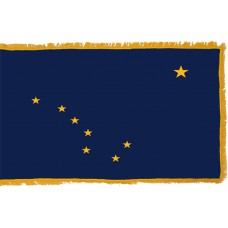 History of the Alaska Flag

The Alaska State Flag features a dark blue background with eight gold stars in the shape of the "big dipper." The North Star (the eighth star) is larger than the other seven stars. The "Big Dipper" is a section of the Ursa Major constellation that forms a ladle shape. The Alaska State Flag was designed by a 13 year old, named Benny Benson after a contest was held to design the flag in 1927. Benson earned a scholarship and a watch for his winning design. The blue color was chosen to represent the sky, sea, and lakes as well as Alaska's wildflowers, especially the forget-me-not flower. The stars represent the Ursa Major constellation which is a symbol of strength, while the North Star represents that Alaska is the Northernmost state in the Union.

Alaska is the largest state of the United States, located in the northwesternmost corner of North America. It shares borders with Canada, the Beaufort Sea, the Arctic Ocean, the Bering Sea, the Chukchi Sea, the Pacific Ocean, and the Gulf of Alaska. It is one of only two states that do not border any other state. The capital of Alaska is Juneau and the largest city is Anchorage. Despite being the largest state by land mass, Alaska has the smallest population.

The name, Alaska is derived from the Aleut word, "Aleyska" which translates to, "Great Land." The state is also referred to as, "The Last Frontier" due to the large areas of land that have not been charted or explored, and is sometimes referred to as the "Land of the Midnight Sun" because for two months during the summer each year, the sun does not set in the Northernmost part of Alaska.

In 1784, the Russians settled in Alaska and occupied the area until 1867, when the United States of America bought Alaska from the Russians for 7.2 million dollars (which is the equivalent of 120 million dollars today. This equaled 2 cents per acre and was known as the "Alaska Purchase." Alaska became an incorporated territory on May 11th, 1912 and was declared and recognized as the 49th State on January 3rd, 1959. Alaska is a popular tourist destination due to the rich culture of the State, beautiful scenery, and because it is home to rare wildlife. Alaska is also home to the largest glacier in North America called the "Bering Glacier."

We offer free images of the Alaska Flag in four sizes (small, medium, large, and high resolution). These images are distributed royalty free for both personal and educational use and are ideal for use in projects and on websites. If you choose to use one of our images, attribution is appreciated, but not required.

The following html code snippets can be copied and pasted to add an image of the Alaska State Flag to your website: