We carry authentic Tennessee State Flags in both indoor and outdoor varieties. Our flags are proudly made in the United States from durable nylon and are printed with vibrant long-lasting inks. The Tennessee state flag is often displayed at schools, government organizations, banks, and other institutions in the state, as well as at the homes of people who take great pride in their Tennessee heritage.

Our indoor flags are finished with a pole hem and your choice of with or without golden fringe. Gold Fringe is the traditional way to display an indoor flag, however, some people choose without fringe for a simple and clean look that is also less expensive. If you are looking for a complete indoor presentation set, our Build Your Own Indoor State Flag Set program allows you to select a durable nylon indoor Tennessee Flag and choose between premium quality poles, bases, and ornaments, and tassel. For indoor applications, most buyers choose a 3ft. x 5ft. flag with an 8ft. pole, however, if you have a low ceiling, you may opt for a 7ft. pole, which is designed to work with drop ceilings. If you are looking for a very substantial state flag display, our 4ft. x 6ft. indoor flags can be paired with a 9ft. pole for our largest indoor display option.

Our outdoor state flags are finished with a canvas header and brass grommets and are offered in five sizes: 2ft. x 3ft., 3ft. x 5ft., 4ft. x 6ft., 5ft. x 8ft., and 6ft. x 10ft., to fit any sized flagpole. Typically, outdoor flags are flown outside of government organizations and institutions on in-ground and wall-mount flagpoles, however, some people also buy these flags to display their state pride at home. If you are looking for a wall-mount Tennessee flag set to display outside of your home, our Build Your Own Outdoor State Flag Set program will allow you to choose between premium quality 6ft. poles and brackets to display the Tennessee Flag on your front porch. 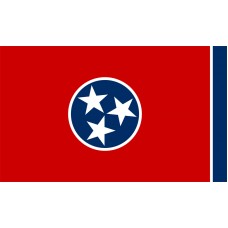 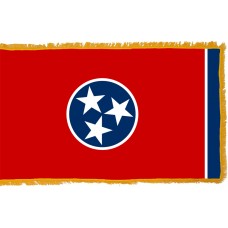 History of the Tennessee Flag

The Tennessee State Flag features a crimson red background with a blue circle outlined in white featured prominently in the center. Inside of the circle is three 5-pointed white stars. On the right-hand side of the flag is a thin vertical strip of white, followed by a thicker vertical stripe of blue. These stripes on the right hand side of the flag do not serve any symbolic meaning, but were included to add variety to the design and make it more visually appealing. The three white stars signify the "three grand divisions" of the state, which are East, West, and Middle Tennessee. These divisions which follow the geographical and topographical features of the state have been recognized since the first Europeans settled in the area. The three stars are bound together by the circle representing the three divisions unity as one. The three stars may also signify that Tennessee was the third state, following the original 13 to enter the United States of America. The Tennessee State flag was adopted on April 17th, 1905.

Tennessee is located in the Southeastern region of the United States of America. It shares borders with Kentucky, Virginia, North Carolina, Georgia, Alabama, Mississippi, Arkansas, and Missouri. Only Tennessee and Missouri share borders with this many states. The capital and largest city of Tennessee is Nashville and the second largest city is Memphis. Tennessee is known as "The Volunteer State," a nickname that has been in place since the War of 1812, when Tennessee was the home to a large number of volunteer soldiers who contributed valiantly during the Battle of New Orleans. Others claim that the state was given this nickname following the Mexican-American war where Tennessee also contributed many volunteer soldiers. The state is also sometimes referred to as, "The Big Bend State," in reference to the Tennessee River which features a big bend. The Native American word for the Tennessee River translates to: "The river with the big bend."

Tennessee was first inhabited approximately 12,000 years ago by Paleo-Indians. Before Europeans arrived, it was inhabited by many different tribes which included, Archaic, Cherokee, and Chickasaw. The first European to arrive to the area was Spanish explorer Hernando de Soto in 1541, who claimed the area for Spain. He was followed by Tristan de Luna in 1559 and Juan Pardo in 1567. It was Juan Pardo who named the area "Tanasqui." Despite the visits by the Spanish explorers, settlements were not established until over a hundred years after the land was claimed. The first settlement, known as "Fort Lick" was built by Charles Charleville in 1714. In 1763, following the French and Indian war, Britain took control of Tennessee and made it part of the North Carolina colony. Following the American Revolutionary War, in 1789, Tennessee became territory of the United States of America and on June 1st, 1796, Tennessee officially became the 16th State.

We offer free images of the Tennessee Flag in four sizes (small, medium, large, and high resolution). These images are distributed royalty free for both personal and educational use and are ideal for use in projects and on websites. If you choose to use one of our images, attribution is appreciated, but not required.

The following html code snippets can be copied and pasted to add an image of the Tennessee State Flag to your website: