We carry authentic Afghanistan Flags in both indoor and outdoor varieties. Our flags are proudly made in the United States from durable nylon and are printed with vibrant long-lasting inks. The Afghanistan national flag is often displayed at embassies, outside of businesses associated with Afghanistan, and at the homes of people who take great pride in their Afghanistan heritage.

Our indoor flags are finished with a pole hem and your choice of with or without golden fringe. Gold fringe is the traditional way to display an indoor flag, however, some people choose without fringe for a simple and clean look that is also less expensive. If you are looking for a complete indoor presentation set, our Build Your Own Indoor International Flag Set program allows you to select a durable nylon indoor Afghanistan Flag and choose between premium quality poles, bases, and ornaments, and tassel. For indoor applications, most buyers choose a 3ft. x 5ft. flag with an 8ft. pole, however, if you have a low ceiling, you may opt for a 7ft. pole, which is designed to work with drop ceilings. If you are looking for a very substantial international flag display, our 4ft. x 6ft. indoor flags can be paired with a 9ft. pole for our largest indoor display option.

Our outdoor international flags are finished with a canvas header and brass grommets and are offered in four sizes: 2ft. x 3ft., 3ft. x 5ft., 4ft. x 6ft., and 5ft. x 8ft., to fit any sized flagpole. Typically, outdoor flags are flown outside of government organizations, businesses, and institutions on in-ground and wall-mount flagpoles, however, some people also buy these flags to display their international pride at home. If you are looking for a wall-mount Afghanistan flag set to display outside of your home, our Build Your Own Outdoor International Flag Set program will allow you to choose between premium quality 6ft. poles and brackets to display the Afghanistan Flag on your front porch. Outdoor flags can also be displayed indoors on interior walls of your home with screws anchored in the wall to attach to the grommets. 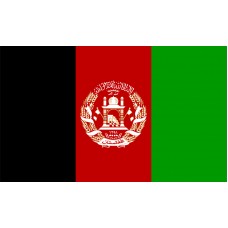 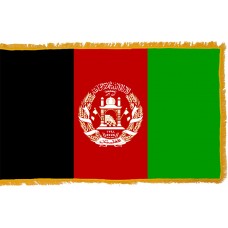 The Afghanistan flag features a tricolor design that is comprised of three equally-sized vertical stripes of black, red, and green. The national emblem of Afghanistan is the central feature of the flag, emblazoned prominently in the center of the red stripe, slightly overlapping onto the black and green stripes on either side.

The central emblem depicts a mosque with a pulpit in the center and flags waving on either side. Underneath the mosque are numerals representing the solar year of 1298 which signifies the Gregorian calendar year of 1919; this was the year Afghanistan gained its independence from the United Kingdom. A circular border comprised of wheat sheaves surrounds the image on the sides. The border is completed by a white inscription of the Muslim creed (the Shahada), which appears in the top center. Underneath this inscription are sun rays beneath an Arabic expression (Takbir) which translates to, "God Is Great". The central bottom portion of the emblem includes Arabic Characters within a scroll that translate to, "Afghanistan."

The black color used on the flag signifies Afghanistan's troubled past, the red color represents the blood lost through the fight for independence, and the green color signifies both the agricultural industry in the country as wall as Islam and future hopes for Afghanistan. The Afghanistan flag has undergone more changes than any other country's flag. In total, the country has flown 26 flags, including 19 that have been used during the 20th century. The first flag recorded was from the Hotak Dynasty established in 1709. The Hotak Dynasty was a monarchy of Afghan created by Miriwais Hotak who led a victorious revolution against the Safavid (Persian overlords) in the southern part of Afghanistan. The majority of the Afghanistan flags have retained the same color scheme of red, green, and black.

The current flag represents the Islamic Republic of Afghanistan and is similar in appearance to the country's flag of 1930 to 1979. The current flag however, was established in 2013 on the 19th of August. There are only four state flags other than the current Afghanistan flag to feature a building, the other flags being the Sammarinese flag, the Cambodian flag, the Spanish flag, and the Portuguese flag.

Afghanistan is a multi-ethnic country which is completely landlocked, located in the southern part of central Asia. It's strategic location which connects Eastern and Southern Asia to the Middle East and Europe has made it highly sought after throughout history by those looking to build strong empires whilst gaining access to important trade routes. The landscape in Afghanistan is unforgiving with mountains and deserts aplenty and the intense heat of the summer sun which can reach temperatures well over 100 degrees Fahrenheit. The people of Afghanistan are very independent and as such, there have been many wars for independence and ever-changing leadership and alliances.

This land is Afghanistan,
it is the pride of every Afghan
The land of peace, the land of sword,
each of its sons is brave

This is the country of every tribe,
The land of Balochs and Uzbeks
Pashtuns and Hazaras,
Turkmens and Tajiks

With them, there are Arabs and Gujjars,
Pamiris, Nuristanis
Brahuis, and Qizilbash,
also Aimaqs and Pashais

This land will shine for ever,
like the sun in the blue sky
In the chest of Asia,
it will remain as heart for ever

We offer free images of the Afghanistan Flag in four sizes (small, medium, large, and high resolution). These images are distributed royalty free for both personal and educational use and are ideal for use in projects and on websites. If you choose to use one of our images, attribution is appreciated, but not required.

The following html code snippets can be copied and pasted to add an image of the Afghanistan Flag to your website: