We carry authentic Solomon Islands Flags in both indoor and outdoor varieties. Our flags are proudly made in the United States from durable nylon and are printed with vibrant long-lasting inks. The Solomon Islands national flag is often displayed at embassies, outside of businesses associated with Solomon Islands, and at the homes of people who take great pride in their Solomon Islands heritage.

Our indoor flags are finished with a pole hem and your choice of with or without golden fringe. Gold fringe is the traditional way to display an indoor flag, however, some people choose without fringe for a simple and clean look that is also less expensive. If you are looking for a complete indoor presentation set, our Build Your Own Indoor International Flag Set program allows you to select a durable nylon indoor Solomon Islands Flag and choose between premium quality poles, bases, and ornaments, and tassel. For indoor applications, most buyers choose a 3ft. x 5ft. flag with an 8ft. pole, however, if you have a low ceiling, you may opt for a 7ft. pole, which is designed to work with drop ceilings. If you are looking for a very substantial international flag display, our 4ft. x 6ft. indoor flags can be paired with a 9ft. pole for our largest indoor display option.

Our outdoor international flags are finished with a canvas header and brass grommets and are offered in four sizes: 2ft. x 3ft., 3ft. x 5ft., 4ft. x 6ft., and 5ft. x 8ft., to fit any sized flagpole. Typically, outdoor flags are flown outside of government organizations, businesses, and institutions on in-ground and wall-mount flagpoles, however, some people also buy these flags to display their international pride at home. If you are looking for a wall-mount Solomon Islands flag set to display outside of your home, our Build Your Own Outdoor International Flag Set program will allow you to choose between premium quality 6ft. poles and brackets to display the Solomon Islands Flag on your front porch. Outdoor flags can also be displayed indoors on interior walls of your home with screws anchored in the wall to attach to the grommets. 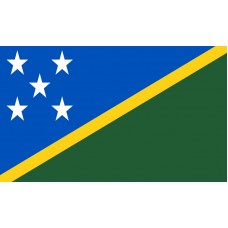 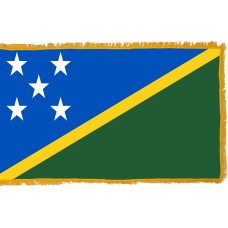 History of the Solomon Islands Flag

The Solomon Islands Flag was adopted on November 18th, 1977, which was eight months before the country gained full independence. At this point, it was self - governing. A national contest was held in 1975 to design the Solomon Islands Flag which a New Zealander won. The blue color of the flag represents the water and how important it is to the country in the form of the Pacific Ocean, rain, and rivers. The green color represents the agriculture, land, crops, and trees of the country and the yellow color represents the sun. The five stars were originally supposed to represent the five provinces that the country was divided into it and even when that changed from five provinces, the five stars still remained unchanged on the flag.

The Solomon Islands is an island country located in the Pacific Ocean that shares maritime borders with Australia, Papua New Guinea, New Caledonia, and Vanuatu. The island country is made up of 6 major islands, which are, Guadalcanal, Choiseul, Santa Isabel, New Georgia, Malaita, and Makira and 900 small islands. The capital city of the Solomon Islands is Honiara which is located on the island of Guadalcanal.

The first European to sight the islands was Spanish explorer, Alvara de Mendana who sighted Santa Isabel on February 6th, 1568. He named the islands "Islas de Salomon" after the biblical King Solomon as he wrongly believed that the king's wealth was on the island after finding a sign of gold.

The economy of the Solomon Islands is mainly reliant on agriculture, forestry, and fishing. Tourism does contribute to the economy as it is considered to be the one of the top diving destinations in the world but is not as popular as it should be due to the poor infrastructure of the country.

We offer free images of the Solomon Islands Flag in four sizes (small, medium, large, and high resolution). These images are distributed royalty free for both personal and educational use and are ideal for use in projects and on websites. If you choose to use one of our images, attribution is appreciated, but not required.

The following html code snippets can be copied and pasted to add an image of the Solomon Islands Flag to your website:

Geographical Location of The Solomon Islands