We carry authentic Iceland Flags in both indoor and outdoor varieties. Our flags are proudly made in the United States from durable nylon and are printed with vibrant long-lasting inks. The Iceland national flag is often displayed at embassies, outside of businesses associated with Iceland, and at the homes of people who take great pride in their Iceland heritage.

Our indoor flags are finished with a pole hem and your choice of with or without golden fringe. Gold fringe is the traditional way to display an indoor flag, however, some people choose without fringe for a simple and clean look that is also less expensive. If you are looking for a complete indoor presentation set, our Build Your Own Indoor International Flag Set program allows you to select a durable nylon indoor Iceland Flag and choose between premium quality poles, bases, and ornaments, and tassel. For indoor applications, most buyers choose a 3ft. x 5ft. flag with an 8ft. pole, however, if you have a low ceiling, you may opt for a 7ft. pole, which is designed to work with drop ceilings. If you are looking for a very substantial international flag display, our 4ft. x 6ft. indoor flags can be paired with a 9ft. pole for our largest indoor display option.

Our outdoor international flags are finished with a canvas header and brass grommets and are offered in four sizes: 2ft. x 3ft., 3ft. x 5ft., 4ft. x 6ft., and 5ft. x 8ft., to fit any sized flagpole. Typically, outdoor flags are flown outside of government organizations, businesses, and institutions on in-ground and wall-mount flagpoles, however, some people also buy these flags to display their international pride at home. If you are looking for a wall-mount Iceland flag set to display outside of your home, our Build Your Own Outdoor International Flag Set program will allow you to choose between premium quality 6ft. poles and brackets to display the Iceland Flag on your front porch. Outdoor flags can also be displayed indoors on interior walls of your home with screws anchored in the wall to attach to the grommets.

In addition to the flags we offer for purchase, we maintain an archive of the audio and lyrics of the Iceland National Anthem, historical information about the Iceland flag, demographic data about Iceland, and free high resolution images of the Iceland flag for use in projects and on websites. 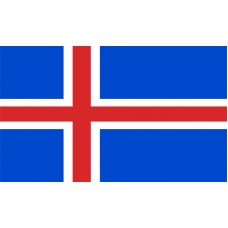 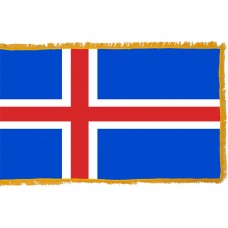 History of the Iceland Flag

The three colors of the flag are said to be depictive of the landscape, red being volcano's, white representing snow and ice, and blue representing the blue mountainous regions.

On the June 17th, 1944 Iceland become a Republic and the first law was announced concerning the flag and its use. A further two laws were issued in 1991, one defining the time and days the official flag can be drawn and the other, the specific colors the flag is made up of.

The law states the flag is regarded as a privilege and not an entitlement, it should be in pristine condition. The owner should abide by the directions of the law for its operation. The Iceland flag is not to be disrespected, there is a possible fine or imprisonment of up to one year if instructions are not followed.

The timings for the flag to be flown state not before 7am and ideally not flown after sunset and it must not be flown after midnight. The exception is that it can be raised at an assembly outdoors, official occasion, memorial, or funeral. The flag can stay out for the duration of these events but it must not stay out after midnight under any circumstance.

The law set on the January 23rd, 1991 sanctioned the national flag days, which requires the flag to be drawn and raised at official buildings supervised by selected representatives of the state. There is a list of Flag days and additional days can be added annually by the Prime Minister’s office. The flag is to be fully drawn on these days with the one exception being Good Friday where the flag is to be drawn to half-mast.

The Presidential flag of Iceland bares a coat of arms and is displayed at the homes of the President along with any transport they use.

Iceland is located in the North Atlantic, it is a Nordic Island country, with its capital being Reykjavic. It is just outside of the Arctic circle with cool summers and a temperate climate that it is warmed by the gulf stream.

The culture on this island comes from its Scandinavian heritage. The Norse and Gaelic were some of the first settlers with current Icelanders mainly being descendants of these. The language is North Germanic originating from the Old West Norse dialect.

Our country's God! Our God's country!
Our life is a feeble and quivering reed;
We perish, deprived of Thy spirit and light
To redeem and uphold in our need.
Inspire us at morn with Thy courage and love,
And lead through the days of our strife!
At evening send peace from Thy heaven above,
And safeguard our nation through life.
Iceland's thousand years,
Iceland's thousand years!
O, prosper our people, diminish our tears
And guide, in Thy wisdom, through life!

We offer free images of the Iceland Flag in four sizes (small, medium, large, and high resolution). These images are distributed royalty free for both personal and educational use and are ideal for use in projects and on websites. If you choose to use one of our images, attribution is appreciated, but not required.

The following html code snippets can be copied and pasted to add an image of the Iceland Flag to your website: