We carry authentic Uzbekistan Flags in both indoor and outdoor varieties. Our flags are proudly made in the United States from durable nylon and are printed with vibrant long-lasting inks. The Uzbekistan national flag is often displayed at embassies, outside of businesses associated with Uzbekistan, and at the homes of people who take great pride in their Uzbekistan heritage.

Our indoor flags are finished with a pole hem and your choice of with or without golden fringe. Gold fringe is the traditional way to display an indoor flag, however, some people choose without fringe for a simple and clean look that is also less expensive. If you are looking for a complete indoor presentation set, our Build Your Own Indoor International Flag Set program allows you to select a durable nylon indoor Uzbekistan Flag and choose between premium quality poles, bases, and ornaments, and tassel. For indoor applications, most buyers choose a 3ft. x 5ft. flag with an 8ft. pole, however, if you have a low ceiling, you may opt for a 7ft. pole, which is designed to work with drop ceilings. If you are looking for a very substantial international flag display, our 4ft. x 6ft. indoor flags can be paired with a 9ft. pole for our largest indoor display option.

Our outdoor international flags are finished with a canvas header and brass grommets and are offered in four sizes: 2ft. x 3ft., 3ft. x 5ft., 4ft. x 6ft., and 5ft. x 8ft., to fit any sized flagpole. Typically, outdoor flags are flown outside of government organizations, businesses, and institutions on in-ground and wall-mount flagpoles, however, some people also buy these flags to display their international pride at home. If you are looking for a wall-mount Uzbekistan flag set to display outside of your home, our Build Your Own Outdoor International Flag Set program will allow you to choose between premium quality 6ft. poles and brackets to display the Uzbekistan Flag on your front porch. Outdoor flags can also be displayed indoors on interior walls of your home with screws anchored in the wall to attach to the grommets. 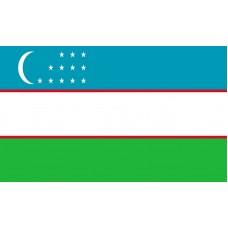 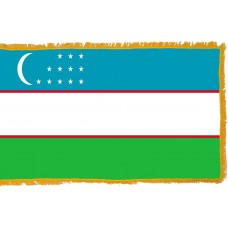 History of the Uzbekistan Flag

Uzbekistan is a double landlocked country (a country that is surrounded by landlocked countries) located in Central Asia. The only other double landlocked country in the world is Liechtenstein. It shares borders with Kazakhstan, Tajikistan, Kyrgyzstan, Afghanistan, and Turkmenistan. The largest and capital city in Uzbekistan is called Tashkent. It is a country that has been ruled and governed by many different Empires throughout history including the Persian Empire, Alexander the Great, and the Mongol Empire. During the 19th century, as the Russian Empire was getting larger, it spread into Central Asia in the 1920s, Uzbekistan, as well as the rest of Central Asia became part of the Soviet Union until they declared their independence on August 31st, 1991.

The majority of Uzbekistan's economy is based on the agriculture and it is a very big producer and exporter of cotton, one of the largest in the world, and it is home to the fourth largest gold deposit in the world. Tourism also contributes to the economy with many historical sites and monuments to visit. The three main tourist destinations in Uzbekistan are Khiva, Bukhara, and Samarkand. Khiva is a city in Uzbekistan that is divided into two parts called Dichan Kala (Outer town) and Itchan Kala (inner town). Itchan Kala is very popular amongst tourists and is home to over 50 monuments and 250 old houses that date back to the 18th and 19th centuries.

The most prominent site here is the "Djuma Mosque" which was originally built in the 10th century but rebuilt in 1788. Bukhara is the fifth largest city in Uzbekistan and is located along the major trade route the "silk road" and is considered to be a "medieval city museum" with approximately 150 historical buildings and monuments. The most visited one is "Kalyan Minaret" which is also referred to as the "tower of death" and is where criminals were killed by being thrown off the roof. Samarkand is a city in Uzbekistan that is considered to be one of the oldest inhabited cities in Central Asia. During the 13th century, the emperor at the time, "Timur" made Samarkand the capital of the "Timurid Empire." The "Registan" (which translates as sandy-place or desert) is one of Samarkand's most important sites and is the public square where crowds used to gather to hear proclamations or for public executions.

My sunny free land, happiness and salvation to your people,
You are a warmhearted companion to your friends!
Flourish forever with learning and creativity,
May your glory shine as long as the world exists!

These golden valleys -- dear Uzbekistan,
The courageous spirit of your ancestors is with you!
When the great power of the people raged,
(You were) the country that charmed the world!

The faith of an open-hearted Uzbek does not die out,
The young free generation is a strong wing for you!
Beacon of independence, guardian of peace,
Lover of truth, motherland, flourish forever!

These golden valleys -- dear Uzbekistan,
The courageous spirit of your ancestors is with you!
When the great power of the people raged,
(You were) the country that charmed the world!

We offer free images of the Uzbekistan Flag in four sizes (small, medium, large, and high resolution). These images are distributed royalty free for both personal and educational use and are ideal for use in projects and on websites. If you choose to use one of our images, attribution is appreciated, but not required.

The following html code snippets can be copied and pasted to add an image of the Uzbekistan Flag to your website: