We carry authentic Peru Flags in both indoor and outdoor varieties. Our flags are proudly made in the United States from durable nylon and are printed with vibrant long-lasting inks. The Peru national flag is often displayed at embassies, outside of businesses associated with Peru, and at the homes of people who take great pride in their Peruvian heritage.

Our indoor flags are finished with a pole hem and your choice of with or without golden fringe. Gold fringe is the traditional way to display an indoor flag, however, some people choose without fringe for a simple and clean look that is also less expensive. If you are looking for a complete indoor presentation set, our Build Your Own Indoor International Flag Set program allows you to select a durable nylon indoor Peru Flag and choose between premium quality poles, bases, and ornaments, and tassel. For indoor applications, most buyers choose a 3ft. x 5ft. flag with an 8ft. pole, however, if you have a low ceiling, you may opt for a 7ft. pole, which is designed to work with drop ceilings. If you are looking for a very substantial international flag display, our 4ft. x 6ft. indoor flags can be paired with a 9ft. pole for our largest indoor display option.

Our outdoor international flags are finished with a canvas header and brass grommets and are offered in four sizes: 2ft. x 3ft., 3ft. x 5ft., 4ft. x 6ft., and 5ft. x 8ft., to fit any sized flagpole. Typically, outdoor flags are flown outside of government organizations, businesses, and institutions on in-ground and wall-mount flagpoles, however, some people also buy these flags to display their international pride at home. If you are looking for a wall-mount Peru flag set to display outside of your home, our Build Your Own Outdoor International Flag Set program will allow you to choose between premium quality 6ft. poles and brackets to display the Peru Flag on your front porch. Outdoor flags can also be displayed indoors on interior walls of your home with screws anchored in the wall to attach to the grommets.

In addition to the flags we offer for purchase, we maintain an archive of the audio and lyrics of the Peru National Anthem, historical information about the Peru flag, demographic data about Peru, and free high resolution images of the Peru flag for use in projects and on websites. 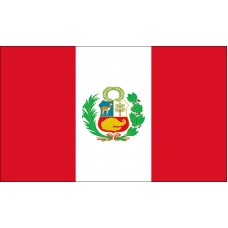 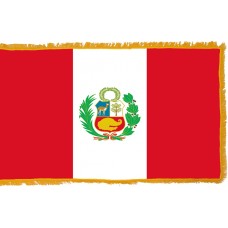 History of the Peru Flag

The Peru Flag consists of three vertical bands in the colors of red, white, and red. In the middle of the white band is the country's national coat of arms. The red colors represent the blood that was lost in the struggle for independence, the sacrifices made by those who fought and defended the country, as well as red being the color of the Incas. The white color represents the peace, the purity of the country, justice and freedom. The coast of arms (known as "Escudo De Armas" in Spanish) represents the country’s history, its geography and flora and fauna.

The Coat of Arms features the Cinchona tree, which is a tree that is native to this part of South America, it features a gold cornucopia (ornament in the shape of a goat's horn) which has coins spilling from it and represents the country’s wealthy mineral resources. It also features a Vicuna, which is a South American animal that resembles a llama. The Peru Flag was designed by Jose de San Martin who led Peru to independence and was adopted on February 25th, 1823, making it one of the world's oldest flags.

Peru is a country in South America that shares borders with Ecuador, Chile, Colombia, Bolivia, and Brazil. Its capital city is called Lima. Peru is a country that has been home to many empires and civilizations throughout history, including the Norte Chico Civilization, which is considered one of the oldest civilizations in the world and the Inca Empire. The Incas were an Indian Civilization who built a rich empire and ruled for over 100 years before the Spanish arrived in the nation. The Incas were very rich in gold and silver, which is what attracted the Spanish to Peru during the 1500s.

In 1811, Jose de San Martin (designer of the national flag) began his fight in South America for independence, beginning with Buenos Aires. In 1817, however, he changed his army and led an army of 5,000 men through the Andes to invade Chile and gain independence. He followed this success by taking his army to Peru and declaring independence of the country in 1821. Peru celebrates Independence Day on July 28th and 29th each year and is known as "Fiestas Patrias" (Patriotic Holidays).

Peru is a popular tourist destination, mainly due to the history of the country and the historic ruins and remains that can be visited, which include, buildings that were built by the Inca Empire which can be found in the town of Macchu Picchu and Cuzco. Tourists also choose to visit Peru to visit the Amazon rainforest (Peru is home to a great portion of the rainforest, after Brazil) and to climb the various mountain ranges, particularly the Andes mountains.

A lot of the residents of Peru live in poor conditions and poverty, even though the country has one of the richest sources of silver and copper, as well as lead, in the world.

Now the roar of rough chains
that we had heard for three centuries of horror
from the free, at the sacred cry
that the world heard astonished, ceased.
Everywhere the inflamed San MartÃ­n
"Liberty", "Liberty" pronounced;
and the Andes, rocking their base,
announced it as well, in unison.

With its influx the peoples woke up,
and like lighting ran the opinion;
from the Isthmus to Tierra del Fuego,
and from Tierra del Fuego to the icy region.
Everyone vowed to break the link
that Nature denied to both worlds,
and break the sceptre that Spain
had reclined, proud, on both.

Lima fulfilled this solemn vow,
and, severe, its anger showed
by throwing out the powerless tyrant,
who had been trying to extend his oppression.
On its endeavor the shackles cracked,
and the furrows that it had repaired in itself
stirred up its hatred and vengeance,
inherited from its Inca and Lord.

Countrymen, may we see it a slave no more.
If for three centuries it moaned, humiliated,
forever may we swear it'd be free,
maintaining its own splendor.
Our arms, until today unarmed,
be they always readying the cannon,
that some day the beaches of Iberia
will feel the horror of its roar.

May we arouse the jealousy of Spain
since it has a premonition, with want and furor,
that in a contest of great nations
our country will enter in comparison.
On the list formed by these
we shall fill the line first,
ahead of the ambitious Iberian tyrant,
who devastated all of America.

On its summit may the Andes sustain
the two-color flag or standard,
may it announce to the centuries the effort
that being free gave us forever.
Under its shadow may we live calmly
and, at the sun's birth over its summits,
may we renew the great oath
we rendered to the God of Jacob.

We offer free images of the Peru Flag in four sizes (small, medium, large, and high resolution). These images are distributed royalty free for both personal and educational use and are ideal for use in projects and on websites. If you choose to use one of our images, attribution is appreciated, but not required.

The following html code snippets can be copied and pasted to add an image of the Peru Flag to your website: