We carry authentic Palau Flags in both indoor and outdoor varieties. Our flags are proudly made in the United States from durable nylon and are printed with vibrant long-lasting inks. The Palau national flag is often displayed at embassies, outside of businesses associated with Palau, and at the homes of people who take great pride in their Palau heritage.

Our indoor flags are finished with a pole hem and your choice of with or without golden fringe. Gold fringe is the traditional way to display an indoor flag, however, some people choose without fringe for a simple and clean look that is also less expensive. If you are looking for a complete indoor presentation set, our Build Your Own Indoor International Flag Set program allows you to select a durable nylon indoor Palau Flag and choose between premium quality poles, bases, and ornaments, and tassel. For indoor applications, most buyers choose a 3ft. x 5ft. flag with an 8ft. pole, however, if you have a low ceiling, you may opt for a 7ft. pole, which is designed to work with drop ceilings. If you are looking for a very substantial international flag display, our 4ft. x 6ft. indoor flags can be paired with a 9ft. pole for our largest indoor display option.

Our outdoor international flags are finished with a canvas header and brass grommets and are offered in four sizes: 2ft. x 3ft., 3ft. x 5ft., 4ft. x 6ft., and 5ft. x 8ft., to fit any sized flagpole. Typically, outdoor flags are flown outside of government organizations, businesses, and institutions on in-ground and wall-mount flagpoles, however, some people also buy these flags to display their international pride at home. If you are looking for a wall-mount Palau flag set to display outside of your home, our Build Your Own Outdoor International Flag Set program will allow you to choose between premium quality 6ft. poles and brackets to display the Palau Flag on your front porch. Outdoor flags can also be displayed indoors on interior walls of your home with screws anchored in the wall to attach to the grommets.

In addition to the flags we offer for purchase, we maintain an archive of the audio and lyrics of the Palau National Anthem, historical information about the Palau flag, demographic data about Palau, and free high resolution images of the Palau flag for use in projects and on websites. 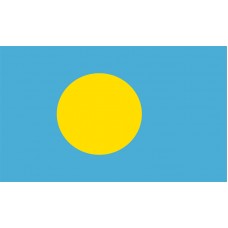 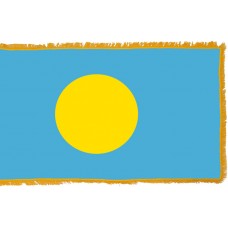 History of the Palau Flag

The Palau Flag consists of a blue field with a gold disc just off the center. The blue color of the flag not only represents the Pacific Ocean, but also represents the change from the foreign domination to their self-government. The gold disc represents the full moon and the people of Palau consider the full moon to be the time for when the majority of human activity occurs, and this particular time of month is celebrated with people fishing, sowing, harvesting, and carving the canoes. The moon is also symbolic of peace, calmness, and love. The Palau Flag was adopted on January 1st, 1981.

Palau (also known as Belau) is an island country (part of the Caroline Islands) in the Pacific Ocean that shares boundaries with Indonesia, Philippines, and Micronesia. Palau is home to over 250 islands and the main and most populated island is called Koror which is home to 70% of the population and the main tourist destination. The capital of Palau is called Ngerulmud and became the capital in 2006, replacing Koror.

Palau was first explored by Europeans during the 16th Century and, as a result, became part of the Spanish East Indies in 1574. In 1899, following the Spanish-American war, Spain sold the island to the German Empire. In 1914, during WWI, Japan captured and dominated the island until 1944, during WWII, when the USA captured it from them after the "Battle of Peleliu." Palau was administered by the United States of America from that time until its independence in 1994. In 1978, Palau began to seek and opted for independence when they were given the option of joining the Federated States of Micronesia, but refused to join along with the Marshall Islands, due to cultural and religious differences.

The majority of the economy in Palau is reliant on tourism, agriculture, and fishing. Approximately 50,000 tourists visit the island each year. One of the main attractions are the famous "Rock Islands." The Rock Islands used to be a coral reef when the ocean levels were high. When the levels decreased, the reef became a cluster of over 200 forest-capped limestone islands. Another main attraction is the "Milky Way Lagoon" which is renowned for being a natural spa treatment. It is advertised and claimed in the tourist guides that this lagoon will make you lose ten years off your age by applying its white mud onto your body and face. Palau is also home to many waterfalls, with the main one being the Ngardmau waterfalls which are one of the largest ones in Micronesia. As well as the popular sights and places to visit, Palau is a very popular destination for those who embark on scuba diving and snorkeling to see the wrecks left from WWII and the great barrier reefs in the clear, blue waters of the island.

Constitutional Government In Free Association With The Us

Palau is coming forth with strength and power,
By her old ways abides still every hour.
One country, safe, secure, one government
Under the glowing, floating soft light stands.

Let's build our economy's protecting fence
With courage, faithfulness and diligence
Our life is anchored in Palau, our land
We with our might through life and death defend

In spirit let's join hands, united, one
Care for our homeland...from forefathers on
Look after its concord, its glory keep
Through peace and love and heart's devotion deep

God bless our country, our island home always
Our sweet inheritance from ancient days
Give us strength and power and all the rights
To govern with to all eternity

We offer free images of the Palau Flag in four sizes (small, medium, large, and high resolution). These images are distributed royalty free for both personal and educational use and are ideal for use in projects and on websites. If you choose to use one of our images, attribution is appreciated, but not required.

The following html code snippets can be copied and pasted to add an image of the Palau Flag to your website: