We carry authentic Micronesia Flags in both indoor and outdoor varieties. Our flags are proudly made in the United States from durable nylon and are printed with vibrant long-lasting inks. The Micronesia national flag is often displayed at embassies, outside of businesses associated with Micronesia, and at the homes of people who take great pride in their Micronesian heritage.

Our indoor flags are finished with a pole hem and your choice of with or without golden fringe. Gold fringe is the traditional way to display an indoor flag, however, some people choose without fringe for a simple and clean look that is also less expensive. If you are looking for a complete indoor presentation set, our Build Your Own Indoor International Flag Set program allows you to select a durable nylon indoor Micronesia Flag and choose between premium quality poles, bases, and ornaments, and tassel. For indoor applications, most buyers choose a 3ft. x 5ft. flag with an 8ft. pole, however, if you have a low ceiling, you may opt for a 7ft. pole, which is designed to work with drop ceilings. If you are looking for a very substantial international flag display, our 4ft. x 6ft. indoor flags can be paired with a 9ft. pole for our largest indoor display option.

Our outdoor international flags are finished with a canvas header and brass grommets and are offered in four sizes: 2ft. x 3ft., 3ft. x 5ft., 4ft. x 6ft., and 5ft. x 8ft., to fit any sized flagpole. Typically, outdoor flags are flown outside of government organizations, businesses, and institutions on in-ground and wall-mount flagpoles, however, some people also buy these flags to display their international pride at home. If you are looking for a wall-mount Micronesia flag set to display outside of your home, our Build Your Own Outdoor International Flag Set program will allow you to choose between premium quality 6ft. poles and brackets to display the Micronesia Flag on your front porch. Outdoor flags can also be displayed indoors on interior walls of your home with screws anchored in the wall to attach to the grommets.

In addition to the flags we offer for purchase, we maintain an archive of historical information about the Micronesia flag, demographic data about Micronesia, and free high resolution images of the Micronesia flag for use in projects and on websites. 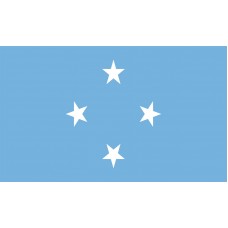 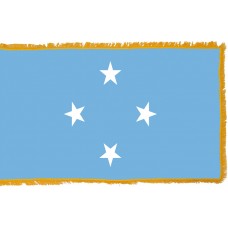 History of the Micronesian Flag

The Micronesia Flag features a light blue background with four 5-pointed white stars arranged in the shape of a diamond. The light blue color represents the Pacific Ocean and the four stars represent the four different states of the Federation, which are, Chuuk (formerly known as Truk), Pohnpei, Yap, and Kosrae. The Micronesia Flag was officially adopted on November 30th, 1978 but the flag has been used since 1962, just the number of stars on the flag has varied, depending on how many islands were included in the federation at the time.

Micronesia (also referred to as the Federated States of Micronesia) is an island nation across the Pacific Ocean. As it is an island nation, there are no bordering countries but its neighbouring countries are, Guam, Nauru, Marshall Islands, Australia, Papa New Guinea, and Philippines. The capital of Micronesia is Palikir, which is located on the island of Pohnpei. Micronesia is made up of 607 islands, only 65 of which are inhabited. Micronesia, literally translates as "small islands." It is one of the smallest countries with just over 100,000 inhabitants. The majority of the inhabitants are located in the largest island of the Federated States of Micronesia, which is called Weno (located on the Chuuk Island) and approximately 14,000 people live here, and approximately 4,500 people live in the capital, Palikir. All the islands were a result of volcanic activity thousands of years ago, and geographically, Micronesia is spread across the Caroline Islands.

During the 16th Century, the Spanish reached and claimed the Caroline Islands until 1899, when they sold them to Germany following the Spanish-American war and it then became part of German New Guinea. During WWI, Japan captured the Caroline Islands and it was under their rule and during WWII, the majority of the Japanese army was based on the island of Truk (Chuuk). Many important and significant battles occurred here, including "Operation Hailstone" (February 1944), which resulted in the destruction of many Japanese vessels and aircrafts. Following WWII, the Federated States of Micronesia came under the control of the USA and was part of the "Trust Territory of the Pacific Islands." On May 10th, 1979, Micronesia became self-governing and on November 3rd, 1986, it became an independent state. Micronesia does not have its own army, as that is still under the control of the USA.

The majority of Micronesia's economy is reliant on agriculture and fishing. There are many beautiful places to visit but tourism is not so popular due to the location of the islands, the size and not enough facilities, making it one of the least visited countries in the world. The only tourists that really visit the island are divers. The island of Chuuk is thought to be the "dive wreck capital of the world" as there are over 50 shipwrecks from WWII to be seen in the waters.

Constitutional government in free association with the us

We offer free images of the Micronesia Flag in four sizes (small, medium, large, and high resolution). These images are distributed royalty free for both personal and educational use and are ideal for use in projects and on websites. If you choose to use one of our images, attribution is appreciated, but not required.

The following html code snippets can be copied and pasted to add an image of the Micronesia Flag to your website: