We carry authentic Singapore Flags in both indoor and outdoor varieties. Our flags are proudly made in the United States from durable nylon and are printed with vibrant long-lasting inks. The Singapore national flag is often displayed at embassies, outside of businesses associated with Singapore, and at the homes of people who take great pride in their Singapore heritage.

Our indoor flags are finished with a pole hem and your choice of with or without golden fringe. Gold fringe is the traditional way to display an indoor flag, however, some people choose without fringe for a simple and clean look that is also less expensive. If you are looking for a complete indoor presentation set, our Build Your Own Indoor International Flag Set program allows you to select a durable nylon indoor Singapore Flag and choose between premium quality poles, bases, and ornaments, and tassel. For indoor applications, most buyers choose a 3ft. x 5ft. flag with an 8ft. pole, however, if you have a low ceiling, you may opt for a 7ft. pole, which is designed to work with drop ceilings. If you are looking for a very substantial international flag display, our 4ft. x 6ft. indoor flags can be paired with a 9ft. pole for our largest indoor display option.

Our outdoor international flags are finished with a canvas header and brass grommets and are offered in four sizes: 2ft. x 3ft., 3ft. x 5ft., 4ft. x 6ft., and 5ft. x 8ft., to fit any sized flagpole. Typically, outdoor flags are flown outside of government organizations, businesses, and institutions on in-ground and wall-mount flagpoles, however, some people also buy these flags to display their international pride at home. If you are looking for a wall-mount Singapore flag set to display outside of your home, our Build Your Own Outdoor International Flag Set program will allow you to choose between premium quality 6ft. poles and brackets to display the Singapore Flag on your front porch. Outdoor flags can also be displayed indoors on interior walls of your home with screws anchored in the wall to attach to the grommets. 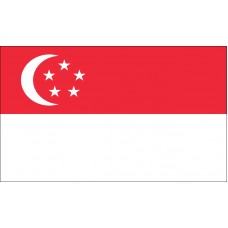 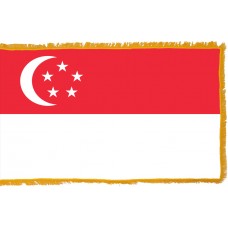 History of the Singapore Flag

The Singapore Flag consists of two equal horizontal bands. The top half of the flag is red and the bottom half of the flag is white. In the top left hand corner of the flag is a white crescent moon that is facing five 5-pointed stars that are in the shape of a pentagon. The color red represents the "universal brotherhood and equality of man" and the color white represents "pervading and everlasting purity and virtue. The moon represents "a young nation on the ascendant" and the five stars on the Singapore flag represent "the nation's ideals of democracy, peace, progress, justice, and equality." The Singapore flag was adopted on December 3rd, 1959, which was the same year the country became self-governing. From 1819-1959 the Union Jack flag was used as the country’s national flag.

Singapore is an island country as well as a sovereign city state in Southeast Asia and is one of the smallest countries in the world. There is no capital as it is both a city and a country and it is thought to be one of the most expensive cities in the world. It is just one of three city states that are still surviving, with the other two being, Monaco, and Vatican City. Singapore is made up of 63 islands and its main island is called Pulau Ujong. It is thought to be the least corrupt state in Asia and it is the fifth least corrupt state in the world.

The island was first discovered by Sir Thomas Stamford Raffles, from the British East India Trading Company, who arrived on the islands on January 28th, 1819. Following his arrival, Stamford Raffles bought the island and began to use it as a trading post. On February 6th, 1819, a treaty was signed that granted permission to the British to establish trading posts and by 1824, Singapore was a British possession. During WWII, the Japanese invaded which resulted in the "Battle of Singapore." On February 15th, 1945, the British forces surrendered in what Winston Churchill claimed to be "The worst disaster and largest capitulation in British history." Approximately 5,000 people died during the battle and 80,000 were captured. The Japanese army deemed themselves victorious and renamed Singapore to "Syonan-to" which translates as "Light of the South." On September 2nd, 1945, the Japanese army surrendered and British, Indian, and Australian forces re-occupied Singapore. In 1959, Singapore became a self-governing state and by 1963, Singapore separated from the British which resulted in their full independence in 1965.

Singapore's entire economy is reliant on shipping. It is recognized as "the easiest place to do business" by the world bank and Singapore is also known as one of the "Four Asian Tigers" (the other three are Hong Kong, South Korea, and Taiwan) due to their highly developed economies.

Come, fellow Singaporeans
Let us progress towards happiness together
May our noble aspiration bring
Singapore success

We offer free images of the Singapore Flag in four sizes (small, medium, large, and high resolution). These images are distributed royalty free for both personal and educational use and are ideal for use in projects and on websites. If you choose to use one of our images, attribution is appreciated, but not required.

The following html code snippets can be copied and pasted to add an image of the Singapore Flag to your website: