We carry authentic India Flags in both indoor and outdoor varieties. Our flags are proudly made in the United States from durable nylon and are printed with vibrant long-lasting inks. The India national flag is often displayed at embassies, outside of businesses associated with India, and at the homes of people who take great pride in their Indian heritage.

Our indoor flags are finished with a pole hem and your choice of with or without golden fringe. Gold fringe is the traditional way to display an indoor flag, however, some people choose without fringe for a simple and clean look that is also less expensive. If you are looking for a complete indoor presentation set, our Build Your Own Indoor International Flag Set program allows you to select a durable nylon indoor India Flag and choose between premium quality poles, bases, and ornaments, and tassel. For indoor applications, most buyers choose a 3ft. x 5ft. flag with an 8ft. pole, however, if you have a low ceiling, you may opt for a 7ft. pole, which is designed to work with drop ceilings. If you are looking for a very substantial international flag display, our 4ft. x 6ft. indoor flags can be paired with a 9ft. pole for our largest indoor display option.

Our outdoor international flags are finished with a canvas header and brass grommets and are offered in four sizes: 2ft. x 3ft., 3ft. x 5ft., 4ft. x 6ft., and 5ft. x 8ft., to fit any sized flagpole. Typically, outdoor flags are flown outside of government organizations, businesses, and institutions on in-ground and wall-mount flagpoles, however, some people also buy these flags to display their international pride at home. If you are looking for a wall-mount India flag set to display outside of your home, our Build Your Own Outdoor International Flag Set program will allow you to choose between premium quality 6ft. poles and brackets to display the India Flag on your front porch. Outdoor flags can also be displayed indoors on interior walls of your home with screws anchored in the wall to attach to the grommets.

In addition to the flags we offer for purchase, we maintain an archive of the audio and lyrics of the India National Anthem, historical information about the India flag, demographic data about India, and free high resolution images of the India flag for use in projects and on websites. 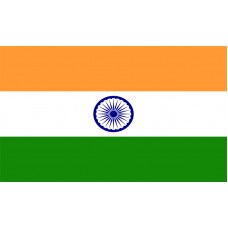 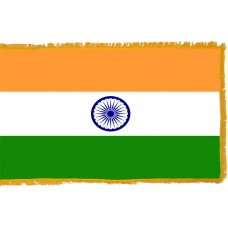 History of the Indian Flag

The national flag of India is made up of three evenly-sized horizontal bands of color: saffron, white, and green, with a 24 spoke dark blue wheel in the center. The flag was adopted on July 22nd, 1947, becoming the official flag of the Dominion of India on August 15th, 1947 and later retained by the Republic of India.

The flag is traditionally constructed from a hand spun cloth or silk material, with the process for manufacture set by the Bureau of Indian Standards. The Khadi Development and Village Industries Commission allocates official manufacturing rights to regional groups.

There is a flag code of India governing the use of the flag and that of any national emblems. In 1921, Ghandi first suggested a flag to the Indian National Congress. The traditional spinning wheel adorned the center of the flag to symbolize Ghandi's aim to make Indians self-sufficient by creating their own clothes. Modifications followed, for religious communities the white stripe became an addition. The three colors of saffron, white, and green symbolize courage and sacrifice, peace and truth, and faith and chivalry, avoiding any sectarian association.

Many different designs were used by leaders of the different independent states, before the Indian Independence Movement. After the rebellion of 1857, resulting in direct Imperial rule over the establishment, the British rulers of India came up with the concept of a single flag. The first flag was similar to other flags of British colonies such as Canada and Australia. This flag comprised of a blue background, a Union flag in the upper left side, and the star of India and crown to the middle right side.

A new flag was introduced in 1905 following the partition of Bengal to represent the Indian Independence Movement. The movement sought to unite different sectors within the country and used religious symbols in the green, yellow, and red tricolor flag. Eight white lotuses were placed on the upper green band for the eight provinces, the Vande Mataram slogan in Hindi on the middle yellow band with the sun and crescent being located on the bottom red band. A slightly modified version of this flag was used at the second International Socialist Congress meeting in Stuttgart in 1907. Sister Nivedita, a Hindu reformist also submitted a different flag design which included a thunderbolt in the center and one hundred and eight oil lamps for the border. The flag was used at the meeting of the Indian National Congress in 1906.

A booklet showing thirty new flag designs from Pingali Venkayya, funded by members from the high court of Madras was submitted in 1916, helping to keep the flag movement alive. In the early 1920’s flag discussions were held across British dominions and as a result the British Indian government put more importance on having a National flag of India as a symbol.

On the final version of the Flag, the symbol in the center was changed from a spinning wheel to a Chakra wheel from the Lion Capital of Ashoka in 1947.

Thou art the ruler of the minds of all people,
Dispenser of India's destiny.
Thy name rouses the hearts of Punjab, Sind,
Gujarat and Maratha,
Of the Dravida and Orissa and Bengal;
It echoes in the hills of the Vindhyas and Himalayas,
mingles in the music of Jamuna and Ganges and is
chanted by the waves of the Indian Ocean.
They pray for thy blessings and sing thy praise.
The saving of all people waits in thy hand,
Thou dispenser of India's destiny.
Victory, victory, victory, Victory to thee.

We offer free images of the India Flag in four sizes (small, medium, large, and high resolution). These images are distributed royalty free for both personal and educational use and are ideal for use in projects and on websites. If you choose to use one of our images, attribution is appreciated, but not required.

The following html code snippets can be copied and pasted to add an image of the India Flag to your website: