We carry authentic Guyana Flags in both indoor and outdoor varieties. Our flags are proudly made in the United States from durable nylon and are printed with vibrant long-lasting inks. The Guyana national flag is often displayed at embassies, outside of businesses associated with Guyana, and at the homes of people who take great pride in their Guyana heritage.

Our indoor flags are finished with a pole hem and your choice of with or without golden fringe. Gold fringe is the traditional way to display an indoor flag, however, some people choose without fringe for a simple and clean look that is also less expensive. If you are looking for a complete indoor presentation set, our Build Your Own Indoor International Flag Set program allows you to select a durable nylon indoor Guyana Flag and choose between premium quality poles, bases, and ornaments, and tassel. For indoor applications, most buyers choose a 3ft. x 5ft. flag with an 8ft. pole, however, if you have a low ceiling, you may opt for a 7ft. pole, which is designed to work with drop ceilings. If you are looking for a very substantial international flag display, our 4ft. x 6ft. indoor flags can be paired with a 9ft. pole for our largest indoor display option.

Our outdoor international flags are finished with a canvas header and brass grommets and are offered in four sizes: 2ft. x 3ft., 3ft. x 5ft., 4ft. x 6ft., and 5ft. x 8ft., to fit any sized flagpole. Typically, outdoor flags are flown outside of government organizations, businesses, and institutions on in-ground and wall-mount flagpoles, however, some people also buy these flags to display their international pride at home. If you are looking for a wall-mount Guyana flag set to display outside of your home, our Build Your Own Outdoor International Flag Set program will allow you to choose between premium quality 6ft. poles and brackets to display the Guyana Flag on your front porch. Outdoor flags can also be displayed indoors on interior walls of your home with screws anchored in the wall to attach to the grommets.

In addition to the flags we offer for purchase, we maintain an archive of the audio and lyrics of the Guyana National Anthem, historical information about the Guyana flag, demographic data about Guyana, and free high resolution images of the Guyana flag for use in projects and on websites. 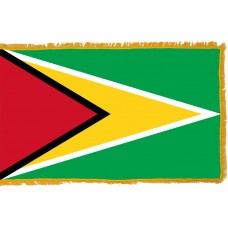 History of the Guyana Flag

Known as the Golden Arrowhead, the Flag of Guyana predominantly features the colors green, gold, and red but also includes white and black. The name of the flag is derived from the red and gold horizontal triangles that enter from the right and form the shape of an arrowhead on a solid green background. The black outline of the red triangle signifies the forward thrust and endurance of the Guyanese people and the white outlined gold triangle represents the waters of the country. The red color represents the zeal and dynamism of the young people building the country, green represents the forests and agricultural areas of Guyana, and gold represents the country's mineral wealth.

The flag was adopted in May 1966 when Guyana gained independence from the United Kingdom. The flag was not designed by a native of Guyana but by a professional flag scholar from the USA, Whitney Smith Junior.

This country is situated on the northern mainland of South America but is more closely related through its culture and history with the nearby Caribbean. Prior to British rule it was originally settled by the Dutch but there is little evidence of this with the exception of some place names such as New Amsterdam and Stabroek Market and the introduction of dykes to the coastal areas to reduce flooding. The colonial buildings and political ideologies are derived from on British ideas. In fact, cricket is widely played and it is the only South American country that is a member of the Commonwealth of Nations and where English is the official language.

Guyana, like it's neighbor Brazil to its south benefits from extensive rain forests with 80% covering the land and fortunately they remain relatively unspoiled and have avoided the exploitation which has occured in other parts of South America. The biodiversity held in these forests is some of the highest in the world with a vast collection of plants, (approximately 8,000 different species are found here), half of which are not found anywhere else in the world. The country is also home to over 1,168 different insect species and 814 bird species. Mammals such as the Jaguar, Saki monkeys, bush dogs, Taipir, and giant anteaters are also commonly found. Early explorers like Charles Waterton and Sir Walter Raleigh took time to note their findings here and in later years naturalists such as Gerald Durrell and David Attenborough came to check out the rich spoils that can be found in this wealth of greenery which is so aptly represented in the flag of Guyana.

To help in the preservation of this incredible natural environment, in 1977, Guyana was the first Caribbean country to sign up to the Convention Concerning the Protection of the World Cultural and Natural Heritage treaty. The country has been working hard to earn UNESCO World Heritage nomination on sites such as the Kaieteur National Park which is home to the impressive Kaieteur Falls and combines with the Iwokrama Forest and the Kanuku Mountains as a cluster site.

Dear Land of Guyana, of Rivers and Plains

Dear land of Guyana, of rivers and plains;
Made rich by the sunshine, and lush by the rains,
Set gem-like and fair, between mountains and sea,
Your children salute you, dear land of the free

Green land of Guyana, our heroes of yore,
Both bondsmen and free, laid their bones on your shore.
This soil so they hallowed, and from them are we,
All sons of one Mother, Guyana the free.

Great land of Guyana, diverse though our strains,
We're born of their sacrifice, heirs of their pains,
And ours is the glory their eyes did not see,
One land of six peoples, united and free.

Dear land of Guyana, to you will we give,
Our homage, our service, each day that we live;
God guard you, great Mother, and make us to be

We offer free images of the Guyana Flag in four sizes (small, medium, large, and high resolution). These images are distributed royalty free for both personal and educational use and are ideal for use in projects and on websites. If you choose to use one of our images, attribution is appreciated, but not required.

The following html code snippets can be copied and pasted to add an image of the Guyana Flag to your website: