We carry authentic Paraguay Flags in both indoor and outdoor varieties. Our flags are proudly made in the United States from durable nylon and are printed with vibrant long-lasting inks. The Paraguay national flag is often displayed at embassies, outside of businesses associated with Paraguay, and at the homes of people who take great pride in their Paraguay heritage.

Our indoor flags are finished with a pole hem and your choice of with or without golden fringe. Gold fringe is the traditional way to display an indoor flag, however, some people choose without fringe for a simple and clean look that is also less expensive. If you are looking for a complete indoor presentation set, our Build Your Own Indoor International Flag Set program allows you to select a durable nylon indoor Paraguay Flag and choose between premium quality poles, bases, and ornaments, and tassel. For indoor applications, most buyers choose a 3ft. x 5ft. flag with an 8ft. pole, however, if you have a low ceiling, you may opt for a 7ft. pole, which is designed to work with drop ceilings. If you are looking for a very substantial international flag display, our 4ft. x 6ft. indoor flags can be paired with a 9ft. pole for our largest indoor display option.

Our outdoor international flags are finished with a canvas header and brass grommets and are offered in four sizes: 2ft. x 3ft., 3ft. x 5ft., 4ft. x 6ft., and 5ft. x 8ft., to fit any sized flagpole. Typically, outdoor flags are flown outside of government organizations, businesses, and institutions on in-ground and wall-mount flagpoles, however, some people also buy these flags to display their international pride at home. If you are looking for a wall-mount Paraguay flag set to display outside of your home, our Build Your Own Outdoor International Flag Set program will allow you to choose between premium quality 6ft. poles and brackets to display the Paraguay Flag on your front porch. Outdoor flags can also be displayed indoors on interior walls of your home with screws anchored in the wall to attach to the grommets. 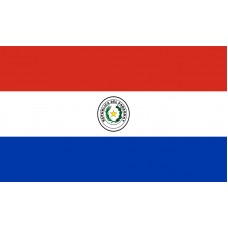 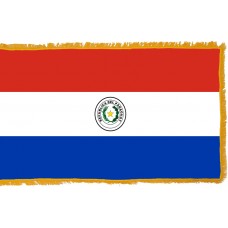 History of the Paraguay Flag

It is one of three national flags that are different on each side. The colors of the Paraguay flag were inspired from the French Tricolor and represent the country’s peace, independence, and liberty as well as the battle that was fought and bloodshed in the fight for independence.

The national coat of arms is an illustration of a yellow 5-pointed star that is surrounded by a green wreath of palm and olive leaves. The words "REPUBLICA DEL PARAGUAY" (Republic of Paraguay) are written around the wreath. The coat of arms represents Paraguay’s fight for independence.

The Seal of Treasury on the other side features a yellow lion (which represents courage) below a red Phrygian cap with the words "PAZ Y JUSTICIA" (peace and justice). The seal of treasury represents liberty, peace, and justice. The Paraguay flag was adopted in 1842. Since gaining independence in 1811, the flag has been changed numerous times until it remained as the one that it is today.

Paraguay is a landlocked country in South America that shares borders with Bolivia, Brazil, and Argentina. It is often referred to as "Corazon De America," which translates as "The Heart of America." It is called this due to it being very central in the South America continent. The capital and largest city of Paraguay as well as one of the oldest cities in South America is called Asuncion City, also known as the "mother of all citie"’ as it was used as a central base by the Spanish during the 16th century. The country of Paraguay is divided by the Paraguay River (the second largest river in South America, following the Amazon River) into two regions.

The first inhabitants of Paraguay were the Native Guarana people. The first European explorers reached Paraguay in 1516. In 1537, the Spanish explorer, Juan De Salazar established the capital, Asuncion City, many settlements were made and Paraguay became a Spanish colony. On May 11th, 1811, the people of Paraguay revolted against the Spanish and on May 14th, 1811, Paraguay was declared independent.

Following its independence, for 60 years, Paraguay was ruled just by dictators and, as a result of the conflict and corruption in government, Paraguay lost a lot of land and 70% of the male population in the "War of the Triple Alliance" between Brazil, Argentina, and Uruguay in 1865-1870.

The economy in Paraguay is dominated by agriculture. Despite some of the beautiful sights that it is home to, Paraguay is the least visited country in South America and one of the main attractions people visit is for the "Festival De San Juan," the colorful festival that occurs every June and celebrates the arrival of summer solstice.

Paraguayans: Republic or Death!
Our spirit gave us liberty
Neither oppressors nor slaves exist
Where union and equality reign.

The peoples of the Americas, unfortunately,
Were oppressed for three centuries by a scepter
But one magnificent day surging forth,
"Enough!", it said, and broke the scepter.
Our fathers, grandiose in battle,
Showed their martial glory;
And after smashing the august diadem,
Raised the triumphal cap.

A new Rome, the Fatherland shall proudly display
Two leaders of name and valor
Who, rivals, like Romulus and Remus
Divided government and power.
Long years, during which Phoebus in the clouds
Saw darken the pearl of the South,
Today a grand hero appears
Raising up again her glory and virtue...

Europe and the world salute her with applause
And also acclaim
Invincible bastion of heroism,
Magnificent Eden of riches.
(But) when discord rumbled all around
Which fatally devoured other Peoples,
Paraguayans, the sacred ground
Was covered by an angel with its wings.

Oh, how pure, of laurel girded
Sweet Fatherland, in this manner you show yourself.
In your ensign one sees the colors
Of sapphire, diamond, and ruby.
In your coat of arms, which the Sun illuminates,
Under the cap, one sees the lion.
Double image of the strong and the free,
And of glories, the memory and crest.

From the tomb of vile feudalism
The national Deity rises free;
Oppressors, bend your knees!
Compatriots, entone the hymn!
Sound the cry, "Republic or death"!
Our breasts exhale it with faith,
And the mountains repeat its echoes
Like giants arising.

Our Fatherland defends liberty and justice;
Tyrants: listen!
The laws in its sacred charter
Will sustain its heroism in the fight.
Against the world, if the world opposes it,
If the world dares to insult her security,
Battling to avenge we shall know her
Or die embracing her.

Arise, oh People, your splendid sword
That strikes with sparkles of God,
There is no middle ground between free or slave
And an abyss divides the two.
In the gentle breezes the Hymn resounds,
Repeating with triumphal echo:
For the free, renowned glory!
For the Fatherland, immortal laurel!

We offer free images of the Paraguay Flag in four sizes (small, medium, large, and high resolution). These images are distributed royalty free for both personal and educational use and are ideal for use in projects and on websites. If you choose to use one of our images, attribution is appreciated, but not required.

The following html code snippets can be copied and pasted to add an image of the Paraguay Flag to your website: