We carry authentic Ecuador Flags in both indoor and outdoor varieties. Our flags are proudly made in the United States from durable nylon and are printed with vibrant long-lasting inks. The Ecuador national flag is often displayed at embassies, outside of businesses associated with Ecuador, and at the homes of people who take great pride in their Ecuador heritage.

Our indoor flags are finished with a pole hem and your choice of with or without golden fringe. Gold fringe is the traditional way to display an indoor flag, however, some people choose without fringe for a simple and clean look that is also less expensive. If you are looking for a complete indoor presentation set, our Build Your Own Indoor International Flag Set program allows you to select a durable nylon indoor Ecuador Flag and choose between premium quality poles, bases, and ornaments, and tassel. For indoor applications, most buyers choose a 3ft. x 5ft. flag with an 8ft. pole, however, if you have a low ceiling, you may opt for a 7ft. pole, which is designed to work with drop ceilings. If you are looking for a very substantial international flag display, our 4ft. x 6ft. indoor flags can be paired with a 9ft. pole for our largest indoor display option.

Our outdoor international flags are finished with a canvas header and brass grommets and are offered in four sizes: 2ft. x 3ft., 3ft. x 5ft., 4ft. x 6ft., and 5ft. x 8ft., to fit any sized flagpole. Typically, outdoor flags are flown outside of government organizations, businesses, and institutions on in-ground and wall-mount flagpoles, however, some people also buy these flags to display their international pride at home. If you are looking for a wall-mount Ecuador flag set to display outside of your home, our Build Your Own Outdoor International Flag Set program will allow you to choose between premium quality 6ft. poles and brackets to display the Ecuador Flag on your front porch. Outdoor flags can also be displayed indoors on interior walls of your home with screws anchored in the wall to attach to the grommets.

In addition to the flags we offer for purchase, we maintain an archive of the audio and lyrics of the Ecuador National Anthem, historical information about the Ecuador flag, demographic data about Ecuador, and free high resolution images of the Ecuador flag for use in projects and on websites. 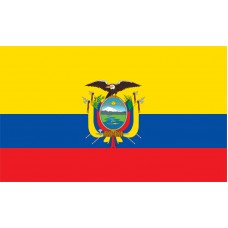 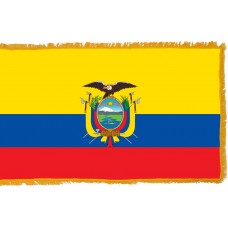 History of the Ecuador Flag

The Ecuador Flag is split in half horizontally, with the top half being yellow and the bottom half being split between two horizontal stripes of blue over red. In the middle of the flag is the Ecuadorian National Coat of Arms. This flag has been in use since 1900, making it one of the world's most enduring national symbols.

The color scheme is the same as those used by Colombia and Venezuela, with whom Ecuador shares a long history. The three modern nations were part of Gran Colombia, which US President John Quincy Adams described as one of the most important nations in the world. The modern nation of Ecuador is actually called the Republic of Ecuador, or Republica del Ecuador in Spanish.

This means republic of the equator. The equator runs through the mainland of Ecuador, which is on the west coast of the South American continent. Ecuador also has outlying islands, including the world-famous Galapagos Islands, which are home to some of the world's most important wildlife species. Charles Darwin formed his theories of evolution after visiting the Galapagos.

The yellow, blue, and red of the Ecuador Flag are primary colors. This is a deliberate design prescribed by the American liberator Francisco de Miranda, who was instrumental in ending Spanish rule in Venezuela. Venezuela, Colombia and Ecuador were provinces of Gran Colombia, which stretched from modern Ecuador to Panama and Guyana.

Miranda decided to use yellow, blue, and red to represent a new start for this part of the world. As primary colors, they are untainted, and each has its own special meaning. Yellow is for warmth, blue is for depth and red is for action. All of these were needed to free the people of South and Central America from Spanish dominion.

The country's landscape features tremendous natural diversity and beauty. The mainland has mountainous areas and spectacular coastlines, and the Galapagos Islands attract many thousands of tourists every year. The tourism industry is one of Ecuador's main sources of income. In addition to its natural wonders, Ecuardor is home to a rich history including the preserved Spanish colonial sites which are on UNESCO's World Heritage list.

We Salute You, Our Homeland (Salve, Oh Patria)

Oh homeland, we greet you a thousand times!
Glory be to you!
Your breast overflows joy and peace
And your radiant face
brighter than the sun shining we see.

The worthy sons of the soil
Which magnificently adorns Pichincha,
They always declared you as their sovereign lady
And shed their blood for you.
God observed and accepted that sacrifice,
And this blood was the prolific seed
Of other heroes who amazed the world,
And in turn, of thousands arising around you.

We offer free images of the Ecuador Flag in four sizes (small, medium, large, and high resolution). These images are distributed royalty free for both personal and educational use and are ideal for use in projects and on websites. If you choose to use one of our images, attribution is appreciated, but not required.

The following html code snippets can be copied and pasted to add an image of the Ecuador Flag to your website: