We carry authentic Malta Flags in both indoor and outdoor varieties. Our flags are proudly made in the United States from durable nylon and are printed with vibrant long-lasting inks. The Malta national flag is often displayed at embassies, outside of businesses associated with Malta, and at the homes of people who take great pride in their Malta heritage.

Our indoor flags are finished with a pole hem and your choice of with or without golden fringe. Gold fringe is the traditional way to display an indoor flag, however, some people choose without fringe for a simple and clean look that is also less expensive. If you are looking for a complete indoor presentation set, our Build Your Own Indoor International Flag Set program allows you to select a durable nylon indoor Malta Flag and choose between premium quality poles, bases, and ornaments, and tassel. For indoor applications, most buyers choose a 3ft. x 5ft. flag with an 8ft. pole, however, if you have a low ceiling, you may opt for a 7ft. pole, which is designed to work with drop ceilings. If you are looking for a very substantial international flag display, our 4ft. x 6ft. indoor flags can be paired with a 9ft. pole for our largest indoor display option.

Our outdoor international flags are finished with a canvas header and brass grommets and are offered in four sizes: 2ft. x 3ft., 3ft. x 5ft., 4ft. x 6ft., and 5ft. x 8ft., to fit any sized flagpole. Typically, outdoor flags are flown outside of government organizations, businesses, and institutions on in-ground and wall-mount flagpoles, however, some people also buy these flags to display their international pride at home. If you are looking for a wall-mount Malta flag set to display outside of your home, our Build Your Own Outdoor International Flag Set program will allow you to choose between premium quality 6ft. poles and brackets to display the Malta Flag on your front porch. Outdoor flags can also be displayed indoors on interior walls of your home with screws anchored in the wall to attach to the grommets.

In addition to the flags we offer for purchase, we maintain an archive of the audio and lyrics of the Malta National Anthem, historical information about the Malta flag, demographic data about Malta, and free high resolution images of the Malta flag for use in projects and on websites. 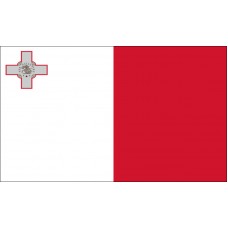 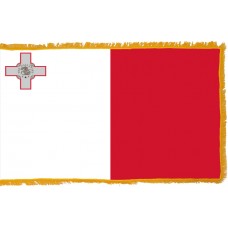 History of the Malta Flag

The Malta Flag features two vertical bands in the colors of white and red. On the white band, in the top left-hand corner of the flag is the George Cross, which has a red border and the motto for "gallantry" written inside of it. The color red represents the sacrifices made and the blood shed defending the country and the color white represents peace, purity, and optimism. The George Cross is a symbol for the bravery and was presented to the country by George VI of England in 1942 as a result of their bravery during WWII. There are various interpretations of the colors that are used on the flag. It is thought that the colors were introduced and given to Malta in 1090 by Roger I of Sicily who took control of Malta following years of Muslim rule. It is also thought that red and white colors were taken from the Knights of Malta who ruled the island between 1530-1798, as they were the flag colors used. The Malta Flag was adopted on September 21st, 1964 (the day it gained independence from Britain), but the flag that was used between 1943-1964 was the same, except the George Cross was on a blue square in the top left-hand corner of the flag. The blue square was removed when the new Malta flag was adopted in 1964 to make it less noticeable.

Malta is an island country located in Europe and is one of the world's smallest countries. Its capital city is called Valletta. It is the smallest country capital in Europe, yet it is where over half of the Maltese population lives. Malta is made up of three main islands, which are Gozo, Comino, and Malta, the other islands are all uninhabited. Malta is a country that has been ruled by many different Empires and countries throughout the years, mainly due to its location. In Ancient history, it was part of the Roman Empire but when that collapsed, Malta faced invasion from the Arabs in 870AD and was under their rule until the Normans invaded in 1090AD. During the Normans rule, Christianity was re-introduced into the country, and all the Muslims were evacuated. Malta was regularly invaded by Turks which caused many conflicts and wars which provoked the natives to build fortresses and palaces to prevent further attacks.

In 1798, Napoleon took control of Malta and due to this, the Maltese invited Britain to the island and it was a British Colony for almost 200 years. Malta became a base for Britain during the war to attack the Italian navy and Germans. During WWI, Malta was referred to as the "Nurse of the Mediterranean" as all of the soldiers that were wounded were brought to the island. During WWII, Malta once again faced invasion and attack by Italy and German Nazi bombers until Italy surrendered to the British.

Malta is a very popular tourist destination due to its beaches and architecture, such as the Seven Megalithic Temples, which is one of the oldest structures in the world that is still standing.

Guard her, O Lord, as ever Thou hast guarded!
This Motherland so dear whose name we bear!
Keep her in mind, whom Thou hast made so fair!
May he who rules, for wisdom be regarded!
In master mercy, strength in man increase!
Confirm us all, in unity and peace!

We offer free images of the Malta Flag in four sizes (small, medium, large, and high resolution). These images are distributed royalty free for both personal and educational use and are ideal for use in projects and on websites. If you choose to use one of our images, attribution is appreciated, but not required.

The following html code snippets can be copied and pasted to add an image of the Malta Flag to your website: