We carry authentic Finland Flags in both indoor and outdoor varieties. Our flags are proudly made in the United States from durable nylon and are printed with vibrant long-lasting inks. The Finland national flag is often displayed at embassies, outside of businesses associated with Finland, and at the homes of people who take great pride in their Finland heritage.

Our indoor flags are finished with a pole hem and your choice of with or without golden fringe. Gold fringe is the traditional way to display an indoor flag, however, some people choose without fringe for a simple and clean look that is also less expensive. If you are looking for a complete indoor presentation set, our Build Your Own Indoor International Flag Set program allows you to select a durable nylon indoor Finland Flag and choose between premium quality poles, bases, and ornaments, and tassel. For indoor applications, most buyers choose a 3ft. x 5ft. flag with an 8ft. pole, however, if you have a low ceiling, you may opt for a 7ft. pole, which is designed to work with drop ceilings. If you are looking for a very substantial international flag display, our 4ft. x 6ft. indoor flags can be paired with a 9ft. pole for our largest indoor display option.

Our outdoor international flags are finished with a canvas header and brass grommets and are offered in four sizes: 2ft. x 3ft., 3ft. x 5ft., 4ft. x 6ft., and 5ft. x 8ft., to fit any sized flagpole. Typically, outdoor flags are flown outside of government organizations, businesses, and institutions on in-ground and wall-mount flagpoles, however, some people also buy these flags to display their international pride at home. If you are looking for a wall-mount Finland flag set to display outside of your home, our Build Your Own Outdoor International Flag Set program will allow you to choose between premium quality 6ft. poles and brackets to display the Finland Flag on your front porch. Outdoor flags can also be displayed indoors on interior walls of your home with screws anchored in the wall to attach to the grommets.

In addition to the flags we offer for purchase, we maintain an archive of the audio and lyrics of the Finland National Anthem, historical information about the Finland flag, demographic data about Finland, and free high resolution images of the Finland flag for use in projects and on websites. 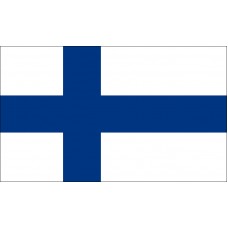 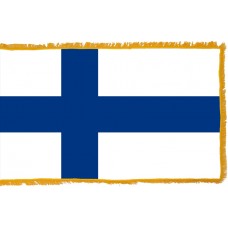 History of the Finland Flag

The Finland Flag features a white field with a blue Nordic cross on it. The cross is symbolic of Christianity, the blue color represents the lakes of the country, and the white represents the snow in the winter. This design was adopted on May 29th, 2018, after Finland gained independence from Russia. The Finland flag is also referred to as "siniristilippu" which translates as the blue cross flag. The flag was designed during a competition following their independence. It was a choice between the blue and white colors or red and yellow colors (like the coat of arms).

Finland is a country that has been ruled by different countries until their independence. For hundreds of years, Sweden ruled Finland and it was part of the "Kingdom of Sweden." During this period, there were two revolutions with Russia and Russia did occupy Finland from 1714-1721 (this period is referred to as the Great Wrath), and once again from 1742-1743 (referred to as the Lesser Wrath). On March 29th, 1809, Russia invaded and gained control and Finland became part of the autonomous Grand Duchy in the Russian Empire until it gained independence in 1917, following the second Russian revolution. When Russia first took over, it was beneficial to the Finnish as they were trying to develop the country but as the years progressed the country was being affected in a negative way and they were attempting to gain independence from the 1820's.

Finland is a Scandinavian country located in Europe and shares borders with Sweden, Norway, Russia, and Estonia. The natives refer to their country as "Suomi." The capital city is called Helsinki. Finland is the most forested country in Europe and is renowned for its abundance of lakes, which has earned the country the nickname, the "Land of the Thousand Lakes."

The economy in Finland is largely based on agriculture (foresting), but in recent years tourism is becoming more important to the economy. One of the most popular attractions is the Santa Claus Village which is located in the Lapland region of Finland, in Rovaniemi. At this village, people can visit the Santa Claus Post Office and Santa Claus office where children can meet him, and you are able to see the white painted lines that mark the Arctic Circle.

Another popular attraction is the fortress of Sveaborg which is a Swedish Castle located on the island of Suomenlinna, part of the capital Helsinki. The castle was built during the 18th Century to prevent the Russians from entering. The Market Square in Helsinki (also known as Kauppatori) is very popular amongst tourists and considered to be the best outdoor market in Europe. The Korkeasaari Zoo (the oldest zoo in the world), located in Helsinki is another main attraction and is renowned for its breeding programs for endangered species, such as snow leopards and Siberian tigers. There are many historic places to visit in Finland, as well as amusement parks, zoos, cultural trips, etc. which is why it is proving to be a popular country to visit.

Our land, our land, our fatherland,
Sound loud, O name of worth!
No mount that meets the heaven's band,
No hidden vale, no wavewashed strand,
Is loved, as is our native North,
Our own forefathers' earth.

Thy blossom, in the bud laid low,
Yet ripened shall upspring.
See! From our love once more shall grow
Thy light, thy joy, thy hope, thy glow!
And clearer yet one day shall ring
The song our land shall sing.

We offer free images of the Finland Flag in four sizes (small, medium, large, and high resolution). These images are distributed royalty free for both personal and educational use and are ideal for use in projects and on websites. If you choose to use one of our images, attribution is appreciated, but not required.

The following html code snippets can be copied and pasted to add an image of the Finland Flag to your website: