We carry authentic Madagascar Flags in both indoor and outdoor varieties. Our flags are proudly made in the United States from durable nylon and are printed with vibrant long-lasting inks. The Madagascar national flag is often displayed at embassies, outside of businesses associated with Madagascar, and at the homes of people who take great pride in their Madagascar heritage.

Our indoor flags are finished with a pole hem and your choice of with or without golden fringe. Gold fringe is the traditional way to display an indoor flag, however, some people choose without fringe for a simple and clean look that is also less expensive. If you are looking for a complete indoor presentation set, our Build Your Own Indoor International Flag Set program allows you to select a durable nylon indoor Madagascar Flag and choose between premium quality poles, bases, and ornaments, and tassel. For indoor applications, most buyers choose a 3ft. x 5ft. flag with an 8ft. pole, however, if you have a low ceiling, you may opt for a 7ft. pole, which is designed to work with drop ceilings. If you are looking for a very substantial international flag display, our 4ft. x 6ft. indoor flags can be paired with a 9ft. pole for our largest indoor display option.

Our outdoor international flags are finished with a canvas header and brass grommets and are offered in four sizes: 2ft. x 3ft., 3ft. x 5ft., 4ft. x 6ft., and 5ft. x 8ft., to fit any sized flagpole. Typically, outdoor flags are flown outside of government organizations, businesses, and institutions on in-ground and wall-mount flagpoles, however, some people also buy these flags to display their international pride at home. If you are looking for a wall-mount Madagascar flag set to display outside of your home, our Build Your Own Outdoor International Flag Set program will allow you to choose between premium quality 6ft. poles and brackets to display the Madagascar Flag on your front porch. Outdoor flags can also be displayed indoors on interior walls of your home with screws anchored in the wall to attach to the grommets. 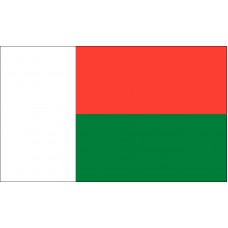 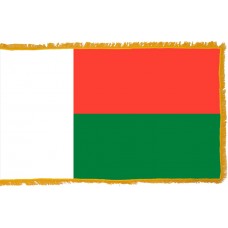 History of the Madagascar Flag

The Madagascar Flag features two horizontal bands in the colors of red and green and on the left-hand side of the flag is a white vertical band. The colors, together, represent Madagascar's history, struggle for independence and its traditions and classes. The red and white colors were the colors of the Merina Kingdom (a state of Africa that ruled most of Madagascar by the 19th Century) and the green color was the color of Hova (the class of peasant Commoners).

Madagascar is an island country in the Indian Ocean, off the coast of Africa (even though it was originally part of Asia) and is the fourth largest island in the world. It is one of the last countries where humans settled. The capital of Madagascar is called Antananarivo which is also the most populated city. The capital is also referred to sometimes as "Tana" which is its French colonial name.

Madagascar is a country that mainly consists of mountains and rainforests and there are many various species of plants and animals that are unique to Madagascar and cannot be found anywhere else, such as the Madagascar Pochard, which is the rarest duck in the world. The biggest and smallest chameleons in the world can also be found here, as can the tomato frog which is one of the most colourful animals in the world. Since humans settled in Madagascar, it has lost over 80% of its rainforests. As well as the cutting of trees, a lot of people went there to explore and find gems as some of the world's highest quality sapphires were discovered in Madagascar.

Madagascar was a very popular tourist destination but has declined over the years due to the frequent civil wars that have happened with the French following Madagascar's independence, which are also preventing the economy from growing. It is one of the poorest countries in Africa with a very poor health and education system and with the majority of the people living on less than $2 a day.

The first European explorer to discover Madagascar was Marco Polo, who also named the island. In 1500, following Marco Polo's visit, the Portuguese arrived on the island, closely followed by the French, Dutch, and British, who all tried to establish settlements on the island but were not permitted. In 1883, the French invaded and attacked the island in what was known as the "Franco-Hora war." By 1895, Madagascar became a French colony and was completely ruled by France until 1957. The people of Madagascar did try to revolt against this in both 1918 and 1947but were unsuccessful until eventually gaining their independence in 1960.

Oh, Our beloved fatherland
Oh good Madagascar.
Our love for you will not leave,
For you, for you for ever.

Bless you, oh Creator
This island of our ancestors
To live in peace and joy
Hey! We are truly blessed.

Oh our beloved fatherland!
We wish to serve you with
The body and heart, spirit that is ours,
You are precious and truly deserving

Oh our beloved fatherland!
We wish that you will be blessed,
So that the Creator of this world
Will be the foundation of your laws.

We offer free images of the Madagascar Flag in four sizes (small, medium, large, and high resolution). These images are distributed royalty free for both personal and educational use and are ideal for use in projects and on websites. If you choose to use one of our images, attribution is appreciated, but not required.

The following html code snippets can be copied and pasted to add an image of the Madagascar Flag to your website: