We carry authentic Jordan Flags in both indoor and outdoor varieties. Our flags are proudly made in the United States from durable nylon and are printed with vibrant long-lasting inks. The Jordan national flag is often displayed at embassies, outside of businesses associated with Jordan, and at the homes of people who take great pride in their Jordan heritage.

Our indoor flags are finished with a pole hem and your choice of with or without golden fringe. Gold fringe is the traditional way to display an indoor flag, however, some people choose without fringe for a simple and clean look that is also less expensive. If you are looking for a complete indoor presentation set, our Build Your Own Indoor International Flag Set program allows you to select a durable nylon indoor Jordan Flag and choose between premium quality poles, bases, and ornaments, and tassel. For indoor applications, most buyers choose a 3ft. x 5ft. flag with an 8ft. pole, however, if you have a low ceiling, you may opt for a 7ft. pole, which is designed to work with drop ceilings. If you are looking for a very substantial international flag display, our 4ft. x 6ft. indoor flags can be paired with a 9ft. pole for our largest indoor display option.

Our outdoor international flags are finished with a canvas header and brass grommets and are offered in four sizes: 2ft. x 3ft., 3ft. x 5ft., 4ft. x 6ft., and 5ft. x 8ft., to fit any sized flagpole. Typically, outdoor flags are flown outside of government organizations, businesses, and institutions on in-ground and wall-mount flagpoles, however, some people also buy these flags to display their international pride at home. If you are looking for a wall-mount Jordan flag set to display outside of your home, our Build Your Own Outdoor International Flag Set program will allow you to choose between premium quality 6ft. poles and brackets to display the Jordan Flag on your front porch. Outdoor flags can also be displayed indoors on interior walls of your home with screws anchored in the wall to attach to the grommets.

In addition to the flags we offer for purchase, we maintain an archive of the audio and lyrics of the Jordan National Anthem, historical information about the Jordan flag, demographic data about Jordan, and free high resolution images of the Jordan flag for use in projects and on websites. 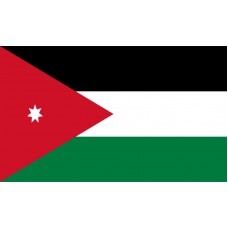 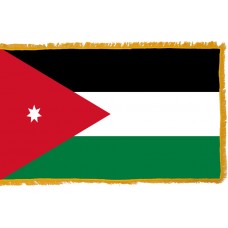 History of the Jordan Flag

The Jordan Flag features three horizontal bands and a triangle on the hoist side. The bands are colored black at the top, white in the center, and green on the bottom. These colors are representative of periods of Muslim history, and are shown on many flags throughout the Middle East. Black is synonymous with the Abbasid, or third Caliphate which was established after the death of the Prophet Muhammad. White represents the second Caliphate, the Umayyad. The red band symbolizes the Fatimid Caliphate.

The red triangle is representative of Jordan's ruling kingdom and historic struggles in the Middle East. The seven pointed white star at the center of the red triangle symbolizes the seven hills upon which Jordan's capital city, Amman, was built. The star's central location in the red triangle is a symbol of Arab liberation from the Ottoman Empire.

All of the colors of the Jordan flag are symbolic of the Pan Arab movement. Jordan is situated in part of the Middle East which has been and remains a center of religious and political contention. The country adopted its current Pan Arab flag design in 1928, to signify Jordan's independence as an Arab nation after centuries of colonial occupation.

The name Jordan refers to the Jordan River, which separates the country from Israel and Palestine to the west. The Jordan River has an important significance in the three major world religions of Judaism, Christianity, and Islam. The country itself was called Trans Jordan, meaning "across the Jordan," by its previous occupiers, who were the British Empire. The British controlled the country until 1946, as part of the British Mandate for Palestine, which was established by the League of Nations in 1923.

The red triangle in Jordan's flag is held to be a symbol of the Hashemite dynasty, which provides the country's current head of state, King Abdullah II. Jordan is officially called The Hashemite Kingdom of Jordan, making it the only Arab country with a monarch. The term "Hashemite" refers to Hashim ibn Abd Manaf, who was the great grandfather of the Prophet Muhammad.

Jordan is a land with great significance to millions of people across the world. The Jordan River itself forms much of the country's western boundary, and most of Jordan's rainfall is in the north west of the country. This is the heart of Jordan's agricultural industry, which feeds much of its people. East of this area, the country is very dry and sparsely populated.

The flag of Jordan symbolizes the country's struggle to become an independent Arab nation. It is one of the most stable countries in the Middle East, despite pressures from outside its control. Its flag has remained the same for almost a century, which is testament to this resilient nation.

Long live the King!
His position is sublime,
His banners waving in glory supreme.

We achieved our goal,
On the day you gave us the mark,
A revolution gives us our motivation!
Flying over the shoulders of the highest comets.

All the youthful men,
Are your armed armies
His determination never dies out!
Getting from your meaning a symbol of well-being!

May you stay the light and the guide,
A master in being away of all sins and wrong-doing,
Living your life happily and well-respected!
Under your flying flag rests the glory of all Arabs.

We offer free images of the Jordan Flag in four sizes (small, medium, large, and high resolution). These images are distributed royalty free for both personal and educational use and are ideal for use in projects and on websites. If you choose to use one of our images, attribution is appreciated, but not required.

The following html code snippets can be copied and pasted to add an image of the Jordan Flag to your website: