We carry authentic Trinidad & Tobago Flags in both indoor and outdoor varieties. Our flags are proudly made in the United States from durable nylon and are printed with vibrant long-lasting inks. The Trinidad & Tobago national flag is often displayed at embassies, outside of businesses associated with Trinidad & Tobago, and at the homes of people who take great pride in their Trinidad & Tobago heritage.

Our indoor flags are finished with a pole hem and your choice of with or without golden fringe. Gold fringe is the traditional way to display an indoor flag, however, some people choose without fringe for a simple and clean look that is also less expensive. If you are looking for a complete indoor presentation set, our Build Your Own Indoor International Flag Set program allows you to select a durable nylon indoor Trinidad & Tobago Flag and choose between premium quality poles, bases, and ornaments, and tassel. For indoor applications, most buyers choose a 3ft. x 5ft. flag with an 8ft. pole, however, if you have a low ceiling, you may opt for a 7ft. pole, which is designed to work with drop ceilings. If you are looking for a very substantial international flag display, our 4ft. x 6ft. indoor flags can be paired with a 9ft. pole for our largest indoor display option.

Our outdoor international flags are finished with a canvas header and brass grommets and are offered in four sizes: 2ft. x 3ft., 3ft. x 5ft., 4ft. x 6ft., and 5ft. x 8ft., to fit any sized flagpole. Typically, outdoor flags are flown outside of government organizations, businesses, and institutions on in-ground and wall-mount flagpoles, however, some people also buy these flags to display their international pride at home. If you are looking for a wall-mount Trinidad & Tobago flag set to display outside of your home, our Build Your Own Outdoor International Flag Set program will allow you to choose between premium quality 6ft. poles and brackets to display the Trinidad & Tobago Flag on your front porch. Outdoor flags can also be displayed indoors on interior walls of your home with screws anchored in the wall to attach to the grommets. 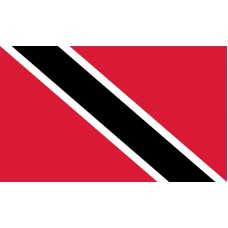 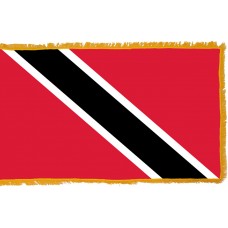 History of the Trinidad and Tobago Flag

The Trinidad and Tobago flag features a red field with a black diagonal band beginning from the top left-hand corner and ending at the bottom right-hand corner. The black band has a white border. The red, black and white colors of the flag represent, earth, water, and fire. The red color (fire) represents the warmth of the sun and the friendliness, bravery and vitality of the nation and its inhabitants.

Trinidad and Tobago is a dual-island country (that is mainly mountainous) that is located in the South Caribbean Sea. It shares maritime borders with Barbados, Grenada, Guyana, and Venezuela. The capital city is called Port of Spain. The islands were separate territories until 1889 and were first settled approximately 7,000 years ago by the Archaic people and were referred to as "Land of the Hummingbird."

This makes Trinidad and Tobago the earliest settled part of the Caribbean. When the islands first got discovered by the Europeans, Trinidad was inhabited by Arawakan-speaking groups, such as the Nepoya and Suppoya as well as Carib-speaking groups, such as the Yao, and Tobago was inhabited by Island Caribs and Galibi. In 1498, following Christopher Columbus's visit to the islands, they became a Spanish colony.

Trinidad and Tobago is considered to be one of the wealthiest and most developed Caribbean countries. The economy is heavily reliant on the petroleum industry and tourism is now becoming a high contributor to the nation. The biggest tourist attraction in Trinidad is called "Pitch Lake" and it attracts approximately 20,000 tourists a year.

Pitch lake is the largest natural deposit of asphalt in the world. Speyside is another popular attraction and is where the biggest brain coral (coral that has a surface that resembles a brain) in the world can be found and is renowned for its diving and snorkeling spots. Both Trinidad and Tobago are known for their beautiful beaches with crystal clear waters. The most well known one in Tobago is Pigeon Point Beach and Maracas Bay is the most famous one in Trinidad.

Forged from the Love of Liberty

Forged from the love of liberty
In the fires of hope and prayer
With boundless faith in our destiny
We solemnly declare:

Side by side we stand
Of the blue Caribbean sea,
This our native land
We pledge our lives to thee.

We offer free images of the Trinidad & Tobago Flag in four sizes (small, medium, large, and high resolution). These images are distributed royalty free for both personal and educational use and are ideal for use in projects and on websites. If you choose to use one of our images, attribution is appreciated, but not required.

The following html code snippets can be copied and pasted to add an image of the Trinidad & Tobago Flag to your website: