We carry authentic Senegal Flags in both indoor and outdoor varieties. Our flags are proudly made in the United States from durable nylon and are printed with vibrant long-lasting inks. The Senegal national flag is often displayed at embassies, outside of businesses associated with Senegal, and at the homes of people who take great pride in their Senegal heritage.

Our indoor flags are finished with a pole hem and your choice of with or without golden fringe. Gold fringe is the traditional way to display an indoor flag, however, some people choose without fringe for a simple and clean look that is also less expensive. If you are looking for a complete indoor presentation set, our Build Your Own Indoor International Flag Set program allows you to select a durable nylon indoor Senegal Flag and choose between premium quality poles, bases, and ornaments, and tassel. For indoor applications, most buyers choose a 3ft. x 5ft. flag with an 8ft. pole, however, if you have a low ceiling, you may opt for a 7ft. pole, which is designed to work with drop ceilings. If you are looking for a very substantial international flag display, our 4ft. x 6ft. indoor flags can be paired with a 9ft. pole for our largest indoor display option.

Our outdoor international flags are finished with a canvas header and brass grommets and are offered in four sizes: 2ft. x 3ft., 3ft. x 5ft., 4ft. x 6ft., and 5ft. x 8ft., to fit any sized flagpole. Typically, outdoor flags are flown outside of government organizations, businesses, and institutions on in-ground and wall-mount flagpoles, however, some people also buy these flags to display their international pride at home. If you are looking for a wall-mount Senegal flag set to display outside of your home, our Build Your Own Outdoor International Flag Set program will allow you to choose between premium quality 6ft. poles and brackets to display the Senegal Flag on your front porch. Outdoor flags can also be displayed indoors on interior walls of your home with screws anchored in the wall to attach to the grommets.

In addition to the flags we offer for purchase, we maintain an archive of the audio and lyrics of the Senegal National Anthem, historical information about the Senegal flag, demographic data about Senegal, and free high resolution images of the Senegal flag for use in projects and on websites. 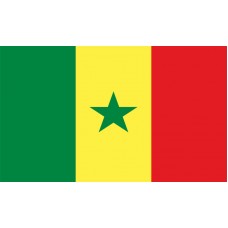 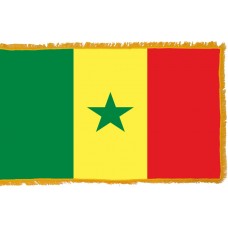 History of the Senegal Flag

The Flag of Senegal features three vertical bands in the colors of green, yellow, and red. There is a 5-pointed green star in the middle of the yellow band. The Senegal flag was adopted in 1960, when it gained independence from France. There are many interpretations of the Senegal flag and what it represents. The green color represents the country's main religion, which is Islam. It is thought that green was the favorite color of the prophet, Mohammad. The green color also represents hope. The yellow color is a symbol of the country's wealth and represents the "product of work." Yellow is also "the color of arts, literature and intellect."

The majority of the literature teachers in Senegal, wear yellow blouses. The red color is the "color of blood" and the nation's determination to fight and make sacrifices. The star is a symbol that is used on a lot of the African flags and represents light, knowledge, and perfection. As well as green, yellow, and red being the Pan-African colors, the three colors also represent the three political parties which joined to form the "Union Progressiste Senegalaise." The green was the "Bloc Democratique Senegalais" (Senegalese Democratic Bloc), the yellow was the "Mouvement Populaire Senegalais" (Senegalese Popular Movements), and the red was for the "Parti Senegalais d'Action Sociale" (Senegalese Party of Socialist Action).

Senegal is a country in West Africa that shares borders with Mauritania, Mali, Guinea, Guinea-Bissau, and The Gambia. The capital city and largest city of Senegal is called Dakar. Dakar is home to "Place de L'Obelisque" which is considered to be the center of the country and the place where all the important moments during Senegal's history passed. It is thought that Senegal obtained its name after the Portuguese arrived during the 16th Century. When they arrived, the native fishermen were shouting "Sunu Gaal," which translates as "these are our boats" and as the Portuguese did not understand what they were saying, they started referring to the country as "Senegal."

Following the arrival of the Portuguese, other Europeans were arriving to the country and in 1677, France gained control of the "Island of Goree" and it was mainly used as a base for slavery and the purchase of slaves until it became the largest slave-trading center.

Today, just from the architecture still seen on the island, one is able to differentiate between the slave-quarters and the grand houses of the slave traders. While Senegal was under French rule, it was forbidden from having its own flag as the French feared that Senegal would try to gain independence if they did this. Following the "Decolonization movement in Africa" Senegal became a self-governing republic still in the French community. On April 4th, 1959, Senegal was merged with the French Soudan and the Mali Federation was formed.

Everyone strum your koras, strike the balafons.
The red lion has roared.
The tamer of the savannah
Has leapt forward,
Dispelling the darkness.
Sunlight on our terrors, sunlight on our hope.
Stand up, brothers, here is Africa assembled.

Senegal, you the son of the lion's froth,
Sprung from the night to the gallop of horses,
Give us, oh! give us the honour of our ancestors,
Splendid as ebony and strong as muscle,
We say it clearly -- the sword has no flaw.

Senegal, we take on your great work:
To shelter the chicks from the falcons,
To make, from east to west, north to south,
Arisen, one single people, a people without seams,
But a people turned to all the winds of the earth.

Senegal, like you, like all our heroes,
We will be hard without hatred, with two open arms.
The sword in peace-time we will store in the scabbard,
For work and words will be our weapon.
The Bantu is a brother, and so is the Arab and the White.

But if the enemy burns our borders
We will be risen with weapons in our hands:
One people defying all sorrows with its faith,
Young and old, men and women.
Death, yes! We say death, but not shame.

We offer free images of the Senegal Flag in four sizes (small, medium, large, and high resolution). These images are distributed royalty free for both personal and educational use and are ideal for use in projects and on websites. If you choose to use one of our images, attribution is appreciated, but not required.

The following html code snippets can be copied and pasted to add an image of the Senegal Flag to your website: