We carry authentic Albania Flags in both indoor and outdoor varieties. Our flags are proudly made in the United States from durable nylon and are printed with vibrant long-lasting inks. The Albania national flag is often displayed at embassies, outside of businesses associated with Albania, and at the homes of people who take great pride in their Albania heritage.

Our indoor flags are finished with a pole hem and your choice of with or without golden fringe. Gold fringe is the traditional way to display an indoor flag, however, some people choose without fringe for a simple and clean look that is also less expensive. If you are looking for a complete indoor presentation set, our Build Your Own Indoor International Flag Set program allows you to select a durable nylon indoor Albania Flag and choose between premium quality poles, bases, and ornaments, and tassel. For indoor applications, most buyers choose a 3ft. x 5ft. flag with an 8ft. pole, however, if you have a low ceiling, you may opt for a 7ft. pole, which is designed to work with drop ceilings. If you are looking for a very substantial international flag display, our 4ft. x 6ft. indoor flags can be paired with a 9ft. pole for our largest indoor display option.

Our outdoor international flags are finished with a canvas header and brass grommets and are offered in four sizes: 2ft. x 3ft., 3ft. x 5ft., 4ft. x 6ft., and 5ft. x 8ft., to fit any sized flagpole. Typically, outdoor flags are flown outside of government organizations, businesses, and institutions on in-ground and wall-mount flagpoles, however, some people also buy these flags to display their international pride at home. If you are looking for a wall-mount Albania flag set to display outside of your home, our Build Your Own Outdoor International Flag Set program will allow you to choose between premium quality 6ft. poles and brackets to display the Albania Flag on your front porch. Outdoor flags can also be displayed indoors on interior walls of your home with screws anchored in the wall to attach to the grommets.

In addition to the flags we offer for purchase, we maintain an archive of the audio and lyrics of the Albania National Anthem, historical information about the Albania flag, demographic data about Albania, and free high resolution images of the Albania flag for use in projects and on websites. 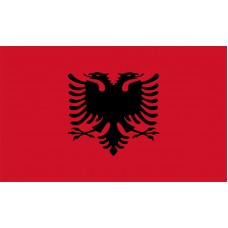 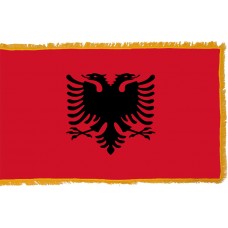 The Albanian flag features a striking design with a red background and the black silhouette of a double headed eagle emblazoned prominently in the center. The red color signifies bravery, while the double-headed eagle represents the independence of Albania.

The design elements of this flag are based on the Albanian military Coat of Arms during the Byzantine Empire. The double headed Eagle was the most consistent picture used by heraldic families in the middle ages and became the Kastrioti's coat of arms. Kastroti led the revolt against the Ottoman Empire with the double headed eagle depicted over a red field and the symbolism was carried on by the Albanian people.

The design used on the Albanian Flag is derived from the flag of Skanderbeg. Skanderbeg is a national historical military hero in Albania, who along with hundreds of other Albanians, defected from the Turkish Military and won numerous improbable victories against the Ottoman Empire. Skanderbeg flew the double eagle flag, which was derived from heraldic imagery of the Middle Ages, having been previously used to represent several noble families in Albania and then became a symbol of all Albanians. The flag became famous when Skanderbeg led a revolt against the Ottoman Empire which resulted in Albanian independence in 1443, which lasted until 1479 when the Ottoman Empire regained power over Albania.

In 1912, led by Ismail Qemali, Albamia declared its independence again and a flag very similar to the current flag was raised to symbolize the new nation. The Albanian flag has changed multiple times over the years in conjunction with regime changes. Between 1928 and 1939, King Zog ruled Albania and changed the flag by adding a crown. The crown was replaced by two faces during the Italian occupation of Albania. After World War II, a communist government changed the flag again by adding a five pointed golden star, which was then removed following the collapse of the communist government in April 1992. From 1969 until the 1990's, the Albania flag was unofficially flown in Kosovo by the countries Albanian population, however, Kosovo now has its own flag which distinguishes its own national heritage.

Interestingly, during the 100th anniversary of the independence of Albania, to celebrate, flags were ordered from a Chinese company who misprinted the flags and the eagle heads were deformed. Today, there are still deformed versions of the flag in circulation.

The republic of Albania is situated in South Eastern Europe and has a population of over three million people. The country spans over 11,100 square miles. It's capital, Tirana is the main economic and commercial center. Tirana is surrounded by other popular cities like Durres, Vlore, Sarande, Berat, Korce, Gjirokaster and Fler which make up the country's most popular destinations and trading markets. The countryside is lush and green with waterfalls and hilly terrain and the weather is well balanced. Albania is becoming a fast growing tourism destination, welcoming vast amounts of new visitors annually which are helping the country's economy.

United around the flag,
With one desire and one goal,
Let us pledge our word of honor
To fight for our salvation

Only he who is a born traitor
Averts from the struggle.
He who is brave is not daunted,
But falls - a martyr to the cause.

With arms in hand we shall remain,
To guard our fatherland round about.
Our rights we will not bequeath,
Enemies have no place here.

For the Lord Himself has said,
That nations vanish from the earth,
But Albania shall live on,
Because for her, it is for her that we fight.

We offer free images of the Albania Flag in four sizes (small, medium, large, and high resolution). These images are distributed royalty free for both personal and educational use and are ideal for use in projects and on websites. If you choose to use one of our images, attribution is appreciated, but not required.

The following html code snippets can be copied and pasted to add an image of the Albania Flag to your website: