We carry authentic Ivory Coast Flags in both indoor and outdoor varieties. Our flags are proudly made in the United States from durable nylon and are printed with vibrant long-lasting inks. The Ivory Coast national flag is often displayed at embassies, outside of businesses associated with Ivory Coast, and at the homes of people who take great pride in their Ivory Coast heritage.

Our indoor flags are finished with a pole hem and your choice of with or without golden fringe. Gold fringe is the traditional way to display an indoor flag, however, some people choose without fringe for a simple and clean look that is also less expensive. If you are looking for a complete indoor presentation set, our Build Your Own Indoor International Flag Set program allows you to select a durable nylon indoor Ivory Coast Flag and choose between premium quality poles, bases, and ornaments, and tassel. For indoor applications, most buyers choose a 3ft. x 5ft. flag with an 8ft. pole, however, if you have a low ceiling, you may opt for a 7ft. pole, which is designed to work with drop ceilings. If you are looking for a very substantial international flag display, our 4ft. x 6ft. indoor flags can be paired with a 9ft. pole for our largest indoor display option.

Our outdoor international flags are finished with a canvas header and brass grommets and are offered in four sizes: 2ft. x 3ft., 3ft. x 5ft., 4ft. x 6ft., and 5ft. x 8ft., to fit any sized flagpole. Typically, outdoor flags are flown outside of government organizations, businesses, and institutions on in-ground and wall-mount flagpoles, however, some people also buy these flags to display their international pride at home. If you are looking for a wall-mount Ivory Coast flag set to display outside of your home, our Build Your Own Outdoor International Flag Set program will allow you to choose between premium quality 6ft. poles and brackets to display the Ivory Coast Flag on your front porch. Outdoor flags can also be displayed indoors on interior walls of your home with screws anchored in the wall to attach to the grommets. 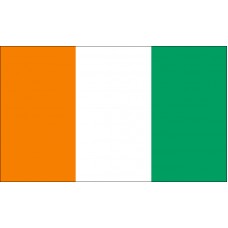 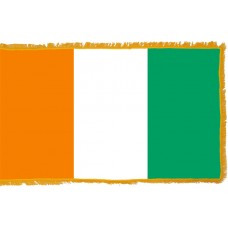 History of the Ivory Coast Flag

When the Ivorian Legislative Assembly were in the process of adopting the flag, Jean Delafosse (minister of State) claimed: "The National Emblem must be the living symbol of the fatherland. Orange, recalling the color of our rich and generous earth; It is the meaning of our struggle, the blood of a young people in our struggle for emancipation. White, peace, but the peace of right. Green, hope, of course, for others; but for us, the certainty of a better future."

The Ivory Coast flag was adopted on December 3rd, 1959 and was still used even after the country gained full independence in 1960. The Ivory Coast is a country in West Africa that shares borders with Guinea, Liberia, Burkina Faso, Mali, Ghana, and the Atlantic Ocean. The capital city is "Yamoussoukro" but the largest city in the country is "Abidjan" which used to be the capital city. The country inherited its name as it is the biggest producer of ivory, which used to be sold there.

The ivory was what first attracted the Europeans (mainly the Portuguese and the French) to the country. The French eventually built settlements there and in 1842, the Ivory Coast became a French Protectorate until it became part of the French Colony from March 10th, 1893 up to its independence in 1960. In 1958, the Ivory Coast was declared a republic but remained within the French community which is why the flag was adopted earlier. In 1986, the Ivory Coast was officially renamed to "Cote D'Ivoire."

The Ivory Coast is a beautiful country that is home to some of the most beautiful beaches, as well as landmarks and monuments. It is renowned for two beaches, which are the Grand Bassam Beach and the Aasouinde Beach due to the crystal-clear waters and white sand. The capital, Yamoussoukro, is home to the "Basilica of our Lady Peace." This is the largest church in the world and can accommodate 1800 people. Abidjan is home to another famous cathedral, "St. Paul's Cathedral" which is the second largest cathedral in Africa.

We salute you, O land of hope,
Country of hospitality;
Thy full gallant legions
Have restored thy dignity.

Beloved Ivory Coast, thy sons,
Humble builders of thy greatness,
All not mustered together for thy glory,
In joy will we construct thee.

Humble citizens of the Ivory Coast, the country call us.
If we have brought back liberty peacefully,
It will be our duty to be an example

Of the hope promised to humanity,
Forging unitedly in new faith
The Fatherland of true brotherhood.

We offer free images of the Ivory Coast Flag in four sizes (small, medium, large, and high resolution). These images are distributed royalty free for both personal and educational use and are ideal for use in projects and on websites. If you choose to use one of our images, attribution is appreciated, but not required.

The following html code snippets can be copied and pasted to add an image of the Ivory Coast Flag to your website: