We carry authentic Slovakia Flags in both indoor and outdoor varieties. Our flags are proudly made in the United States from durable nylon and are printed with vibrant long-lasting inks. The Slovakia national flag is often displayed at embassies, outside of businesses associated with Slovakia, and at the homes of people who take great pride in their Slovakian heritage.

Our indoor flags are finished with a pole hem and your choice of with or without golden fringe. Gold fringe is the traditional way to display an indoor flag, however, some people choose without fringe for a simple and clean look that is also less expensive. If you are looking for a complete indoor presentation set, our Build Your Own Indoor International Flag Set program allows you to select a durable nylon indoor Slovakia Flag and choose between premium quality poles, bases, and ornaments, and tassel. For indoor applications, most buyers choose a 3ft. x 5ft. flag with an 8ft. pole, however, if you have a low ceiling, you may opt for a 7ft. pole, which is designed to work with drop ceilings. If you are looking for a very substantial international flag display, our 4ft. x 6ft. indoor flags can be paired with a 9ft. pole for our largest indoor display option.

Our outdoor international flags are finished with a canvas header and brass grommets and are offered in four sizes: 2ft. x 3ft., 3ft. x 5ft., 4ft. x 6ft., and 5ft. x 8ft., to fit any sized flagpole. Typically, outdoor flags are flown outside of government organizations, businesses, and institutions on in-ground and wall-mount flagpoles, however, some people also buy these flags to display their international pride at home. If you are looking for a wall-mount Slovakia flag set to display outside of your home, our Build Your Own Outdoor International Flag Set program will allow you to choose between premium quality 6ft. poles and brackets to display the Slovakia Flag on your front porch. Outdoor flags can also be displayed indoors on interior walls of your home with screws anchored in the wall to attach to the grommets. 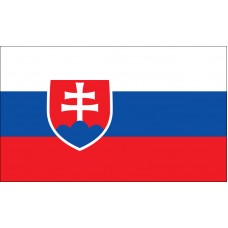 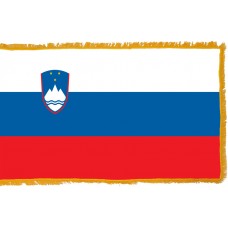 History of the Slovakian Flag

The Slovakia Flag features thee horizontal bands in the colors of white, blue, and red. Towards the left side of the flag is the country's coat of arms. The coat of arms consists of a red shield that has a double white cross standing on a 3-peaked blue mountain. The colors on the flag which were introduced to the flag in 1848 when Hungary ruled Slovakia are the Pan-Slavic colors that represent the Slavic unity and independence. The cross represents the Christianity religion and the 3-peaked blue mountain represents the mountain ranges, which are the "Tatra," "Fatra," and "Matra." The current Slovakia flag was adopted on September 3rd, 1992 even though it can be dated back to 1848.

In the 11th century, Slovakia became part of the "Kingdom of Hungary." There were two divisions known as Lower Hungary (which the Hungarians occupied) and Upper Hungary (which the Slovakians occupied). In 1241, the "Kingdom of Hungary" was invaded by the Mongols which led to a huge population loss. As a result of this, the Hungarians invited other European settlers which included the Germans, Vlachs from Romania and the Jews. Slovakia was part of the Kingdom of Hungary until 1918 when the Austro-Hungarian Empire collapsed. In 1918, following the collapse, Slovakia, Bohemia, Moravia, Czech Silesia, and Carpathian Ruthenia formed Czechoslovakia until 1989 when Czechoslovakia consisted of the Czech Socialist Republic and the Slovak Socialist Republic. Due to tensions within the government and the Velvet Revolution, the two countries gained independence in 1992.

Slovakia's economy is mainly reliant on heavy industry such as mining and the productions of machinery, as well as agriculture and tourism which is now contributing to the economy. Tourism is not as progressive as in neighboring countries but the country's tourism has been increasing over recent year. Slovakia is home to 180 castles and 425 chateaux, which is the highest amount in the world. It Is also home to over 6,000 caves, one of the most important ones being the "Ochtinska Aragonite Cave" which is one of three aragonite caves in the world, the others being in Mexico and Argentina. The most visited peak in Slovakia is the "Gerlachovsky Stit" which is the highest point in Slovakia and a very popular attraction. The Ruins of Spis Castle is one of the largest castle sites within Central Europe and another very popular tourist attraction.

There's lightning over the Tatras,
thunderclaps wildly beat.
Let us stop them, brothers,
They'll just disappear,
the Slovaks will revive.

That Slovakia of ours
has been fast asleep so far.
But the thunder's lightning
is rousing it
to come awake.

We offer free images of the Slovakia Flag in four sizes (small, medium, large, and high resolution). These images are distributed royalty free for both personal and educational use and are ideal for use in projects and on websites. If you choose to use one of our images, attribution is appreciated, but not required.

The following html code snippets can be copied and pasted to add an image of the Slovakia Flag to your website: