We carry authentic Spain Flags in both indoor and outdoor varieties. Our flags are proudly made in the United States from durable nylon and are printed with vibrant long-lasting inks. The Spain national flag is often displayed at embassies, outside of businesses associated with Spain, and at the homes of people who take great pride in their Spanish heritage.

Our indoor flags are finished with a pole hem and your choice of with or without golden fringe. Gold fringe is the traditional way to display an indoor flag, however, some people choose without fringe for a simple and clean look that is also less expensive. If you are looking for a complete indoor presentation set, our Build Your Own Indoor International Flag Set program allows you to select a durable nylon indoor Spain Flag and choose between premium quality poles, bases, and ornaments, and tassel. For indoor applications, most buyers choose a 3ft. x 5ft. flag with an 8ft. pole, however, if you have a low ceiling, you may opt for a 7ft. pole, which is designed to work with drop ceilings. If you are looking for a very substantial international flag display, our 4ft. x 6ft. indoor flags can be paired with a 9ft. pole for our largest indoor display option.

Our outdoor international flags are finished with a canvas header and brass grommets and are offered in four sizes: 2ft. x 3ft., 3ft. x 5ft., 4ft. x 6ft., and 5ft. x 8ft., to fit any sized flagpole. Typically, outdoor flags are flown outside of government organizations, businesses, and institutions on in-ground and wall-mount flagpoles, however, some people also buy these flags to display their international pride at home. If you are looking for a wall-mount Spain flag set to display outside of your home, our Build Your Own Outdoor International Flag Set program will allow you to choose between premium quality 6ft. poles and brackets to display the Spain Flag on your front porch. Outdoor flags can also be displayed indoors on interior walls of your home with screws anchored in the wall to attach to the grommets.

In addition to the flags we offer for purchase, we maintain an archive of the audio and lyrics of the Spain National Anthem, historical information about the Spain flag, demographic data about Spain, and free high resolution images of the Spain flag for use in projects and on websites. 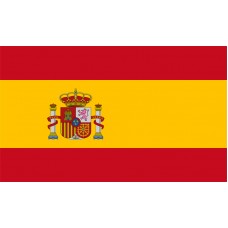 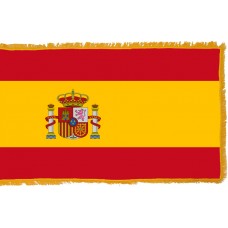 History of the Spain Flag

The Spain Flag features three horizontal bands in the colors of red, yellow, and red. The yellow band is twice the size of the two red bands. Towards the left of the flag, in the yellow band, is the national coat of arms. The Coat of Arms consists of a shield with a crown on top. The shield is divided into quarters. In the top left quarter of the shield is a gold castle on a red background, in the top right quarter is a red lion on a white background, the bottom left quarter consists of red and yellow stripes and the bottom right quarter has a golden chain link. At the bottom of the shield (between the two quarters) is a pomegranate flower and in the center of the shield is a fleur-de-lis (flower of the lily). At each side of the shield there are two crowned pillars of Hercules and on the pillars is a banner with the inscription "Plus Ultra" which translates as "More Beyond."

The six Coat of Arms represent the six different Kingdoms of Spain which are the "Kingdom of Castile" (the gold castle), the "Kingdom of Leon" (the red lion), the "Kingdom of Aragon" (the red and yellow stripes), the "Kingdom of Navarre" (the golden chain link), the "Kingdom of Granada" (the pomegranate flower), and the "House of Bourbon" (the fleur-de-lis). The two pillars of Hercules represent the Straits of Gibraltar and the crowns on each pillar represent the Royal Crown (King of Spain) and the Imperial Crown (Holy Roman Emperor). The inscription "Plus Ultra" symbolizes the new territories that had been discovered by Christopher Columbus. The Spain Flag was officially adopted on October 5th, 1981 and was designed by Antonio Valdes Y Bazan and was chosen by Charles III of Spain. It is also referred to as "La Rojigualda" which translates as the "Red-weld."

Spain is a country that is located in Europe and shares borders with the Mediterranean Sea, France, Andorra, Bay of Biscay, Portugal, and the Atlantic Ocean. It consists of two island groups, which are the Balearic Islands and Canary Islands. The largest and capital city of Spain is Madrid and the second largest city is Barcelona. The tourism industry in Spain is one of the largest in the world and it is thought that there are more tourists in Spain than there are residents.

Glory, glory, crown of the Fatherland
sovereign light
which in your standard is gold.

Life, life, future of the Fatherland,
in your eyes it is
an open heart

Purple and gold: immortal flag;
in your colors, together, flesh and soul are.

Purple and gold: to want and to achieve;
You are, flag, the sign of human effort.

Glory, glory, crown of the Fatherland
sovereign light
which in your standard is gold.

Purple and gold: immortal flag;
in your colors, together, flesh and soul are.

We offer free images of the Spain Flag in four sizes (small, medium, large, and high resolution). These images are distributed royalty free for both personal and educational use and are ideal for use in projects and on websites. If you choose to use one of our images, attribution is appreciated, but not required.

The following html code snippets can be copied and pasted to add an image of the Spain Flag to your website: