We carry authentic Venezuela Flags in both indoor and outdoor varieties. Our flags are proudly made in the United States from durable nylon and are printed with vibrant long-lasting inks. The Venezuela national flag is often displayed at embassies, outside of businesses associated with Venezuela, and at the homes of people who take great pride in their Venezuelan heritage.

Our indoor flags are finished with a pole hem and your choice of with or without golden fringe. Gold fringe is the traditional way to display an indoor flag, however, some people choose without fringe for a simple and clean look that is also less expensive. If you are looking for a complete indoor presentation set, our Build Your Own Indoor International Flag Set program allows you to select a durable nylon indoor Venezuela Flag and choose between premium quality poles, bases, and ornaments, and tassel. For indoor applications, most buyers choose a 3ft. x 5ft. flag with an 8ft. pole, however, if you have a low ceiling, you may opt for a 7ft. pole, which is designed to work with drop ceilings. If you are looking for a very substantial international flag display, our 4ft. x 6ft. indoor flags can be paired with a 9ft. pole for our largest indoor display option.

Our outdoor international flags are finished with a canvas header and brass grommets and are offered in four sizes: 2ft. x 3ft., 3ft. x 5ft., 4ft. x 6ft., and 5ft. x 8ft., to fit any sized flagpole. Typically, outdoor flags are flown outside of government organizations, businesses, and institutions on in-ground and wall-mount flagpoles, however, some people also buy these flags to display their international pride at home. If you are looking for a wall-mount Venezuela flag set to display outside of your home, our Build Your Own Outdoor International Flag Set program will allow you to choose between premium quality 6ft. poles and brackets to display the Venezuela Flag on your front porch. Outdoor flags can also be displayed indoors on interior walls of your home with screws anchored in the wall to attach to the grommets. 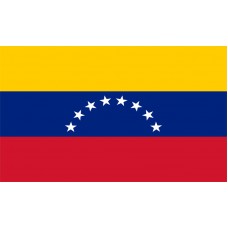 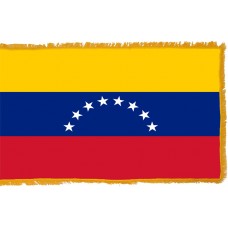 History of the Venezuela Flag

The Venezuela Flag features three horizontal bands in the colors of yellow, blue, and red. In the center of the blue band is an arc/semicircle of eight 5-pointed stars. The yellow color represents the riches and the wealth of the country, the blue color represents the Caribbean Sea and the beaches in Venezuela as well as independence, and the red color represents the blood that was shed in the battle for independence from Spain and the courage that was shown. The eight stars on the Venezuela Flag represent the eight provinces. There were originally seven stars as there were only seven provinces, Caracas, Cumana, Barcelona, Barinas, Margarita, Merida, and Truijillo. The eighth star was added after Guyana became a newly freed province. The Venezuela flag is derived from the first flag that was designed in in 1806 by liberation leader, Francisco de Mirando during his fight for independence and later adopted by national congress in 1811. The current Venezuela flag was adopted on March 12th, 2006.

Venezuela (which is officially called the Bolivarian Republic of Venezuela) is a country in South America that shares borders with Colombia, Brazil, Guyana, and the Caribbean Sea. The largest and capital city is called Caracas. Venezuela's name is derived from "Veneziola" or "Piccola Venezia" which translates as "Little Venice." It was given this name by explorer Amerigo Vespucci after he saw the stilt houses in Venezuela that reminded him of Venice. Venezuela is also known as the "Land of Grace" following Christopher Columbus's visit when he thought that he had reached paradise as he stated.

Venezuela was first discovered in 1498 by Christopher Columbus when he reached the "Gulf of Paria" which is the inland sea between Trinidad and Venezuela. The following year, it was visited by explorer Alonso de Ojeda. In 1522, the Spanish colonization of Venezuela began despite resistance from the natives. On July 5th, 1811, liberator Francisco de Mirando declared independence, which resulted in the Venezuelan War of Independence where the Venezuela Republic was brought down due to an earthquake in 1812 in the capital Caracas. Independence was finally gained on June 24th, 1821 after Simon Bolivar (also known as "the liberator") who also led Colombia, Ecuador, Peru, Panama, and Bolivia to independence and won the battle of Carabobo. He secured Venezuela's independence as part of the Republic of Gran Colombia. Venezuela became its own independent republic in 1830.

The economy in Venezuela is mainly reliant on petroleum and manufacturing. Venezuela is home to one of the largest gas reserves in the world and the second largest oil reserve in the world. Tourism is also becoming increasingly popular with a dramatic rise in tourists over the last decade due to its renowned clear-water, white sand beaches and famous landmarks, such as the "Angel Falls" which are the world's highest waterfalls, "Lake Maracaibo" which is one of the oldest lakes on earth and the largest in South America, and the "Monumento a la virgin de la paz" which translates as "Monument to our lady of peace" and is the world's highest Virgin Mary statue and the highest sculpture that the American continent has.

Glory to the brave people
which shook off the yoke,
the Law respecting
virtue and honour.

"Down with the chains!"
Cried out the Lord;
and the poor man in his hovel
for freedom implored.
Upon this holy name
trembled in fear
the vile selfishness
that had once triumphed.

Let's cry out aloud:
Down with oppression!
Faithful countrymen, your strength
lies in your unity;
and from the heavens
the supreme Creator
breathed a sublime spirit
into the nation.

United by bonds
made by heaven,
all America exists
as a Nation;
and if tyranny
raises its voice,
follow the example

We offer free images of the Venezuela Flag in four sizes (small, medium, large, and high resolution). These images are distributed royalty free for both personal and educational use and are ideal for use in projects and on websites. If you choose to use one of our images, attribution is appreciated, but not required.

The following html code snippets can be copied and pasted to add an image of the Venezuela Flag to your website: