We carry authentic Eritrea Flags in both indoor and outdoor varieties. Our flags are proudly made in the United States from durable nylon and are printed with vibrant long-lasting inks. The Eritrea national flag is often displayed at embassies, outside of businesses associated with Eritrea, and at the homes of people who take great pride in their Eritrea heritage.

Our indoor flags are finished with a pole hem and your choice of with or without golden fringe. Gold fringe is the traditional way to display an indoor flag, however, some people choose without fringe for a simple and clean look that is also less expensive. If you are looking for a complete indoor presentation set, our Build Your Own Indoor International Flag Set program allows you to select a durable nylon indoor Eritrea Flag and choose between premium quality poles, bases, and ornaments, and tassel. For indoor applications, most buyers choose a 3ft. x 5ft. flag with an 8ft. pole, however, if you have a low ceiling, you may opt for a 7ft. pole, which is designed to work with drop ceilings. If you are looking for a very substantial international flag display, our 4ft. x 6ft. indoor flags can be paired with a 9ft. pole for our largest indoor display option.

Our outdoor international flags are finished with a canvas header and brass grommets and are offered in four sizes: 2ft. x 3ft., 3ft. x 5ft., 4ft. x 6ft., and 5ft. x 8ft., to fit any sized flagpole. Typically, outdoor flags are flown outside of government organizations, businesses, and institutions on in-ground and wall-mount flagpoles, however, some people also buy these flags to display their international pride at home. If you are looking for a wall-mount Eritrea flag set to display outside of your home, our Build Your Own Outdoor International Flag Set program will allow you to choose between premium quality 6ft. poles and brackets to display the Eritrea Flag on your front porch. Outdoor flags can also be displayed indoors on interior walls of your home with screws anchored in the wall to attach to the grommets.

In addition to the flags we offer for purchase, we maintain an archive of the audio and lyrics of the Eritrea National Anthem, historical information about the Eritrea flag, demographic data about Eritrea, and free high resolution images of the Eritrea flag for use in projects and on websites. 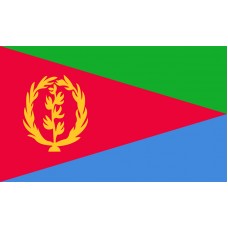 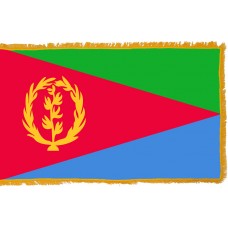 History of The Eritrea Flag

The Eritrea Flag is characterized by a blood red triangle which points from left to right, dividing the design with a green field above the triangle and and blue field below it. The triangle points in the direction like an arrow from left to right. Each color of the Eritrea Flag was carefully chosen for its symbolic meaning. The green area of the Eritrea Flag represents the natural beauty of the country, the blue area to the bottom end of the flag is the same blue as that used by the United Nations, which shows the respect the country has for that institution (The UN administered Eritrea after a period of instability caused by violent conflict with Ethiopia), and the red represents the blood shed during the violent fight for independence. Also featured on the Eritrea's flag is the country's national emblem. This consists of a laurel wreath and an olive branch. The laurel wreath is the symbol of the United nations, and the olive branch is an internationally recognized symbol of peace.

The design is derived from the flag of the Eritrean People's Liberation Front. This group fought for independence from Ethiopia for many years, resulting in Eritrea becoming an independent nation in 1993. Eritrea is an African country which sits at the north-eastern tip of the continent, located at the southern end of the Red Sea, which separates Africa from Arabia. This area has been one of the most important in the course of human history, and is featured in sacred religious texts from the Jewish, Christian, and Muslim religions.

Ethiopia and Eritrea were part of the same country until 1993. The country's capital city, Asmara, is situated in the highlands, which form much of the country's dramatic and beautiful landscape. They are also the basis of its border with Ethiopia, which lies to Eritrea's south and west.

Eritrea and Ethiopia were occupied by Italy from 1889. At that time, this part of the world was known as Abyssinia. The British empire assumed control of what is now Eritrea during World War II. This continued a history of colonization by many empires. Eritrea is a nation of peoples from Africa, Europe, and Asia. In fact, the country has nine recognized ethnic groups, which is a reflection of its central position in both world history and geography. Three languages are spoken in the country - Tigrinya, Arabic, and English.

In 1869 the Suez Canal opened, connecting the Red Sea with the Mediterranean sea. The canal was created as a passage to connect Europe and Asia, but also created an opportunity for Eritrea to expand its trade. This has helped to create new economic opportunities in Eritrea which were not previously available.

She holds firmly her goal,
her name has come to mean perseverance and steadfastness,
Eritrea, the pride of the oppressed people,
is a testament that truth prevails.

Eritrea, Eritrea,
has taken her rightful place in the world.

The supreme dedication that brought her liberation,
will serve to rebuild her and make her green,
We shall honour her with progress,
It is our legacy to embellish her.

Eritrea, Eritrea,
has taken her rightful place in the world.

We offer free images of the Eritrea Flag in four sizes (small, medium, large, and high resolution). These images are distributed royalty free for both personal and educational use and are ideal for use in projects and on websites. If you choose to use one of our images, attribution is appreciated, but not required.

The following html code snippets can be copied and pasted to add an image of the Eritrea Flag to your website: