We carry authentic Italy Flags in both indoor and outdoor varieties. Our flags are proudly made in the United States from durable nylon and are printed with vibrant long-lasting inks. The Italy national flag is often displayed at embassies, outside of businesses associated with Italy, and at the homes of people who take great pride in their Italian heritage.

Our indoor flags are finished with a pole hem and your choice of with or without golden fringe. Gold fringe is the traditional way to display an indoor flag, however, some people choose without fringe for a simple and clean look that is also less expensive. If you are looking for a complete indoor presentation set, our Build Your Own Indoor International Flag Set program allows you to select a durable nylon indoor Italy Flag and choose between premium quality poles, bases, and ornaments, and tassel. For indoor applications, most buyers choose a 3ft. x 5ft. flag with an 8ft. pole, however, if you have a low ceiling, you may opt for a 7ft. pole, which is designed to work with drop ceilings. If you are looking for a very substantial international flag display, our 4ft. x 6ft. indoor flags can be paired with a 9ft. pole for our largest indoor display option.

Our outdoor international flags are finished with a canvas header and brass grommets and are offered in four sizes: 2ft. x 3ft., 3ft. x 5ft., 4ft. x 6ft., and 5ft. x 8ft., to fit any sized flagpole. Typically, outdoor flags are flown outside of government organizations, businesses, and institutions on in-ground and wall-mount flagpoles, however, some people also buy these flags to display their international pride at home. If you are looking for a wall-mount Italy flag set to display outside of your home, our Build Your Own Outdoor International Flag Set program will allow you to choose between premium quality 6ft. poles and brackets to display the Italy Flag on your front porch. Outdoor flags can also be displayed indoors on interior walls of your home with screws anchored in the wall to attach to the grommets.

In addition to the flags we offer for purchase, we maintain an archive of the audio and lyrics of the Italy National Anthem, historical information about the Italy flag, demographic data about Italy, and free high resolution images of the Italy flag for use in projects and on websites. 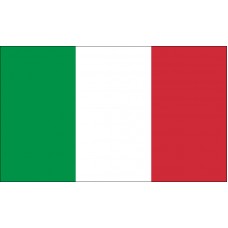 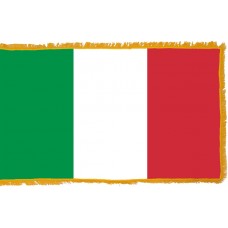 History of the Italian Flag

The Italian Flag is comprised of three vertical bands in the colors green, white, and red. There are varied interpretations on the meaning of the colors, howevver the most common interpretation is that the green color symbolizes the hills, plains, and greenery of Italy as well hope and prosperity, the white color symbolizes the snowy Alp mountains, as well as faith and peace, and the red color represents the war fought for independence and the bloodshed as well as charity and giving.

The colors on the flag were first used by the Italian military in 1796, but the flag comprised of these colors was not officially adopted until January 1st, 1948, although it was used unofficially since June 1946. It is thought that the Italian flag was inspired by the French flag after Napoleon brought it into Italy in 1797. Italy has a rich history spanning back 200,000 years. The country has spent many years under the rule of different countries (mainly Austria, France, and Spain). In 1494, France invaded and attacked Italy causing the collapse of many states.

In 1527, Germany and Spain both invaded Rome and from 1713-1795, Italy was dominated by Habsburg Austria. In 1796, when Napoleon entered the country, Italy and all the states were briefly united until the Napoleonic war in 1814. Following the war, and the Congress of Vienna, Italy once again became divided into 8 parts. Parma, Moderna, and Tuscany were ruled by the Habsburgs, Lombardy and Venetia were ruled by Austria, Piedmont-Sardinia-Genoa and Papal States were independent and Naples and Sicily were ruled by France. In 1848, the "Risorgiment" began.

The Risorgiment which literally translates as "Resurgence" was Italy's movement for independence and the attempt to unite the separated states. There were many battles in Italy during this movement, with the main and most powerful opposition coming from the Austrian Empire and the Habsburgs. In 1861, the Kingdom of Italy was created by Giuseppe Garibaldi who took control of Sicily and from here, the many states started to become united.

Italy is located in Southern Europe and shares borders with Austria, France, Switzerland, Slovenia, The Vatican City, and San Marino. The capital of Italy is Rome. Italy is home to two independent states, which are, San Marino and the Vatican City (the smallest country in the world). Italy is the 5th most visited country in Europe as it is home to such beautiful and historical sites like the "Colosseum" (located in Rome) which is the largest amphitheater that was built during the Roman Empire and is one of the most popular tourist attractions in Italy. Other popular attractions include, the Leaning Tower of Pisa, Lake Como, the Cathedral of Santa Maria Del Fiore (Duomo Santa Maria del Fiore) in Florence, Venice, and a trip on the Gondolas.

The Chant of the Italians (Il Canto degli Italiani)

Brothers of Italy,
Italy has awoken,
with Scipio's helmet
binding her head.
Where is Victory?
Let her bow down,
For God has made her
Rome's slave.

We were for centuries
Downtrodden and derided,
because we are not one people,
because we are divided.
Let one flag, one hope
gather us all.
The hour has struck
for us to join together.

Let us unite and love one another,
Union and love
Show the people
The way of the Lord.
Let us swear to free
Our native soil;
United under God,
Who can defeat us?

From the Alps to Sicily,
Legnano is everywhere;
Every man has the heart
and hand of Ferruccio
The children of Italy
Are all called Balilla;
Every trumpet blast
sounds the Vespers.

Mercenary swords,
they're feeble reeds.
The Austrian eagle
Has already lost its plumes.
The blood of Italy
and the Polish blood
It drank, along with the Cossack,
But it burned its heart.

We offer free images of the Italy Flag in four sizes (small, medium, large, and high resolution). These images are distributed royalty free for both personal and educational use and are ideal for use in projects and on websites. If you choose to use one of our images, attribution is appreciated, but not required.

The following html code snippets can be copied and pasted to add an image of the Italy Flag to your website: