We carry authentic Bulgaria Flags in both indoor and outdoor varieties. Our flags are proudly made in the United States from durable nylon and are printed with vibrant long-lasting inks. The Bulgaria national flag is often displayed at embassies, outside of businesses associated with Bulgaria, and at the homes of people who take great pride in their Bulgarian heritage.

Our indoor flags are finished with a pole hem and your choice of with or without golden fringe. Gold fringe is the traditional way to display an indoor flag, however, some people choose without fringe for a simple and clean look that is also less expensive. If you are looking for a complete indoor presentation set, our Build Your Own Indoor International Flag Set program allows you to select a durable nylon indoor Bulgaria Flag and choose between premium quality poles, bases, and ornaments, and tassel. For indoor applications, most buyers choose a 3ft. x 5ft. flag with an 8ft. pole, however, if you have a low ceiling, you may opt for a 7ft. pole, which is designed to work with drop ceilings. If you are looking for a very substantial international flag display, our 4ft. x 6ft. indoor flags can be paired with a 9ft. pole for our largest indoor display option.

Our outdoor international flags are finished with a canvas header and brass grommets and are offered in four sizes: 2ft. x 3ft., 3ft. x 5ft., 4ft. x 6ft., and 5ft. x 8ft., to fit any sized flagpole. Typically, outdoor flags are flown outside of government organizations, businesses, and institutions on in-ground and wall-mount flagpoles, however, some people also buy these flags to display their international pride at home. If you are looking for a wall-mount Bulgaria flag set to display outside of your home, our Build Your Own Outdoor International Flag Set program will allow you to choose between premium quality 6ft. poles and brackets to display the Bulgaria Flag on your front porch. Outdoor flags can also be displayed indoors on interior walls of your home with screws anchored in the wall to attach to the grommets. 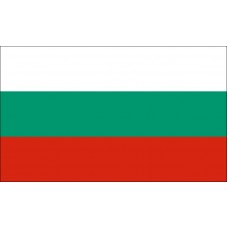 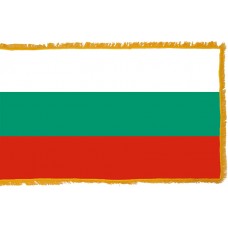 History of the Bulgarian Flag

The Bulgarian Flag features a tricolor design of three equal-sized horizontal bands of white, green, and red. The white color is a symbol for peace and love, the green color represents the freedom of Bulgaria and agriculture, and the red color symbolizes the struggle for independence and the blood lost by the people of Bulgaria during this struggle. The Bulgarian flag was adopted on April 16th, 1979, following the Russo-Turkish war which resulted in Bulgaria gaining its independence.

Between the years of 1946-1990, the national emblem was added to the Bulgarian flag on the left side of the white stripe. However, following the collapse of communism in 1990, the original tri-color flag was once again adopted, on November 27th, 1990.

Bulgaria is located in South Eastern Europe and shares borders with Romania, Serbia, Macedonia, Greece, Turkey and the Black Sea. The country's name originates from the Bulgar people, who were the first settlers of the region in 200 AD. In the 600's, the first Bulgarian state was formed, which was ruled by Tsar Simeon I between 893-927; This period was known as the Golden Age of Bulgaria. The second Empire began in 1155 AD and remained in power for 70 years. In 1396, the Ottoman Empire gained control over Bulgaria and ruled for 500 years. The country slowly became divided and, even though the people of Bulgaria tried to rebel throughout the years, they lost the battle each time.

Following the Balkan War in 1876, Bulgaria began to rebel again against the Ottoman Empire and in 1877, both Russia and Bulgaria declared war from which Bulgaria gained its independence and the treaty of San Stefano was signed on March 3rd, 1878. During both world wars, Bulgaria tried to remain neutral but eventually became Germany's ally in both wars. Despite their alliance with Germany, Bulgaria was the only country besides Denmark that refused to send the Jewish people in their country to Hitler's concentration camps during the war.

Bulgaria is a very beautiful country that is becoming a popular tourist attraction. It is the oldest country in Europe, dating back before the Roman Empire and the only country in Europe whose name has not been changed at any point. The largest city, which is also the capital city of Bulgaria is Sofia. This is also the oldest capital in Europe, dating back to 7,000 years ago. The most abundant visitors to Bulgaria are Eastern Europeans, who recognize the country for its beautiful mountains, beaches, ski resorts, and historical sites. There are over 250 historic landmarks to visit in Bulgaria, which include, the Rila Monastery, Thracian Tomb of Kazanak, Boyana Church and the Ancient City of Nessebar.

Proud Balkan Mountains,
next to it the Danube sparkles,
the sun shines over Thrace,
and blazes over Pirin.

Dear Motherland,
you are heaven on earth,
your beauty, your loveliness,
ah, they are boundless.

Countless fighters died,
for our beloved nation,
mother, give us manly strength
to continue their path.

We offer free images of the Bulgaria Flag in four sizes (small, medium, large, and high resolution). These images are distributed royalty free for both personal and educational use and are ideal for use in projects and on websites. If you choose to use one of our images, attribution is appreciated, but not required.

The following html code snippets can be copied and pasted to add an image of the Bulgaria Flag to your website: