We carry authentic Iran Flags in both indoor and outdoor varieties. Our flags are proudly made in the United States from durable nylon and are printed with vibrant long-lasting inks. The Iran national flag is often displayed at embassies, outside of businesses associated with Iran, and at the homes of people who take great pride in their Iranian heritage.

Our indoor flags are finished with a pole hem and your choice of with or without golden fringe. Gold fringe is the traditional way to display an indoor flag, however, some people choose without fringe for a simple and clean look that is also less expensive. If you are looking for a complete indoor presentation set, our Build Your Own Indoor International Flag Set program allows you to select a durable nylon indoor Iran Flag and choose between premium quality poles, bases, and ornaments, and tassel. For indoor applications, most buyers choose a 3ft. x 5ft. flag with an 8ft. pole, however, if you have a low ceiling, you may opt for a 7ft. pole, which is designed to work with drop ceilings. If you are looking for a very substantial international flag display, our 4ft. x 6ft. indoor flags can be paired with a 9ft. pole for our largest indoor display option.

Our outdoor international flags are finished with a canvas header and brass grommets and are offered in four sizes: 2ft. x 3ft., 3ft. x 5ft., 4ft. x 6ft., and 5ft. x 8ft., to fit any sized flagpole. Typically, outdoor flags are flown outside of government organizations, businesses, and institutions on in-ground and wall-mount flagpoles, however, some people also buy these flags to display their international pride at home. If you are looking for a wall-mount Iran flag set to display outside of your home, our Build Your Own Outdoor International Flag Set program will allow you to choose between premium quality 6ft. poles and brackets to display the Iran Flag on your front porch. Outdoor flags can also be displayed indoors on interior walls of your home with screws anchored in the wall to attach to the grommets.

In addition to the flags we offer for purchase, we maintain an archive of historical information about the Iran flag, demographic data about Iran, and free high resolution images of the Iran flag for use in projects and on websites. 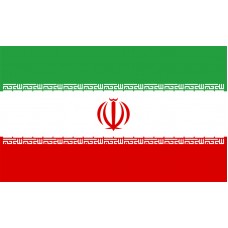 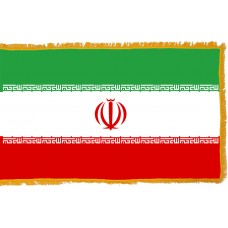 History of the Iranian Flag

The flag of Iran is made up of three equal stripes of the colors green, white, and red. There is also a red centered National Emblem. The Takbir is written in Kufic script in white, a total of twenty-two times on the fringe of the stripes. This is split eleven times along the bottom edge of the green horizontal part of the flag and eleven times along the top edge of the red stripe. To mirror the changes impacted from the Iranian Revolution of 1979 this flag was adopted on July 29th, 1980. This flag replaced that of the Islamic Republic Persian Monarchy, under the leader Grand Ayatollah Ruhollah Khomeini with backing from some Islamist and leftist organizations.

The red centered emblem tulip shape design is a memorial to those who have died for Iran, symbolizing the patriotic value and self-sacrifice, from the legend that red tulips mature from the martyr's bloodshed. The emblem is highly complex in design, using words and phrases to form the crescents for the tulip shape.

The green color of the flag is representative of happiness, growth, unity, nature, vitality, and the Persian language in Iranian culture. The white is the traditional color for freedom. The red is symbolic of martyrdom as well as being representative of fire, love, life, bravery, warmth, and sophistication.

Iran has had a turbulent history of war and peace and thus many flags have been flown in this country. A well-known flag in use up until the revolution of 1979 was a tricolor green, white, and red flag with a Lion and sun motif superimposed onto it. The new Iranian government looked upon the Lion and sun emblem as a symbol of "oppressive westernizing monarchy" so it was replaced on the new version of the flag and the Red Crescent Society was the new name that took the place of The Red Lion and Sun Society.

Communities in exile are presently using the lion and sun flag as a symbol of defiance against the Islamic Republic. Monarchists and some other political organizations continue to use it as well.

The oldest flag used to represent Iran featured a seated man opposite a kneeling woman and a black star in between. There are numerous other designs used throughout the reigns of the different empires, including a leather and silk jewel encrusted flag showing a four-pointed center star in Sassanid times. Griffin and checkered motifs appeared on banners in the Ghaznavid dynasty, which was a Turkic dynasty devoted to Iranian culture promotion.

In cities in California such as Los Angeles that have sizable expatriate communities you can see the noticeable lion and sun markings on souvenirs and flags.

The capital of Iran is Tehran, which is also the most populous city in Western Asia.

We offer free images of the Iran Flag in four sizes (small, medium, large, and high resolution). These images are distributed royalty free for both personal and educational use and are ideal for use in projects and on websites. If you choose to use one of our images, attribution is appreciated, but not required.

The following html code snippets can be copied and pasted to add an image of the Iran Flag to your website: