We carry authentic Ukraine Flags in both indoor and outdoor varieties. Our flags are proudly made in the United States from durable nylon and are printed with vibrant long-lasting inks. The Ukraine national flag is often displayed at embassies, outside of businesses associated with Ukraine, and at the homes of people who take great pride in their Ukrainian heritage.

Our indoor flags are finished with a pole hem and your choice of with or without golden fringe. Gold fringe is the traditional way to display an indoor flag, however, some people choose without fringe for a simple and clean look that is also less expensive. If you are looking for a complete indoor presentation set, our Build Your Own Indoor International Flag Set program allows you to select a durable nylon indoor Ukraine Flag and choose between premium quality poles, bases, and ornaments, and tassel. For indoor applications, most buyers choose a 3ft. x 5ft. flag with an 8ft. pole, however, if you have a low ceiling, you may opt for a 7ft. pole, which is designed to work with drop ceilings. If you are looking for a very substantial international flag display, our 4ft. x 6ft. indoor flags can be paired with a 9ft. pole for our largest indoor display option.

Our outdoor international flags are finished with a canvas header and brass grommets and are offered in four sizes: 2ft. x 3ft., 3ft. x 5ft., 4ft. x 6ft., and 5ft. x 8ft., to fit any sized flagpole. Typically, outdoor flags are flown outside of government organizations, businesses, and institutions on in-ground and wall-mount flagpoles, however, some people also buy these flags to display their international pride at home. If you are looking for a wall-mount Ukraine flag set to display outside of your home, our Build Your Own Outdoor International Flag Set program will allow you to choose between premium quality 6ft. poles and brackets to display the Ukraine Flag on your front porch. Outdoor flags can also be displayed indoors on interior walls of your home with screws anchored in the wall to attach to the grommets.

In addition to the flags we offer for purchase, we maintain an archive of the audio and lyrics of the Ukraine National Anthem, historical information about the Ukraine flag, demographic data about Ukraine, and free high resolution images of the Ukraine flag for use in projects and on websites. 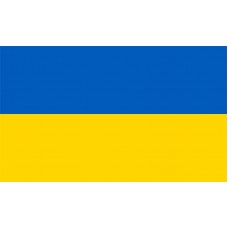 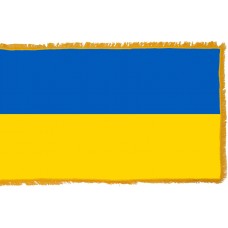 History of the Ukrainian Flag

The Ukraine flag features two equal horizontal bands in the colors of blue and yellow. The yellow color represents the fields of wheat and the blue color represents the sky, mountains, and streams of Ukraine. The blue and yellow colors became the national colors of Ukraine in 1848 and were derived from the Coat of Arms of Lviv. The first national flag that was adopted in 1848 featured two horizontal bands with the yellow as the top color and blue at the bottom.

The colors of the flag were reversed in 1918 to represent "blue skies over golden wheat fields." The current Ukraine Flag was adopted on January 28th, 1992 following decades of the original flag being banned when the country was occupied by the Germans and the Soviets. During the Soviet Rule, the red banner of the Soviet Union was used as the national flag under the communist system. Following Ukraine’s independence and the collapse of the Soviet Union on August 24th, 1991 the anti-communists fought for the flag to be replaced with the current Ukraine flag.

Ukraine is a country in Eastern Europe (the second largest country, following Russia) and shares borders with Russia, Belarus, Poland, Slovakia, Hungary, Romania, and Moldova. The capital and largest city is called Kiev. Kiev is referred as the "spiritual capital" as pilgrims travel here to visit the "Sofia Kyivska Church" as well as "St. Michael’s Golden-Domed Monastery." Ukraine (which translates as "borderland" or "region") was formerly known as "Kievan Rus" until the 16th century.

Ukraine is a country that has endured many invasions and attacks, mainly due to the fact that it is a country full of natural and wealthy resources which are, iron ore, oil, salt, Sulphur, granite, coal, and gas as well as others. It has come under the power of many different countries which include, Lithuania, Poland, Austria-Hungary, the Ottoman Empire, and Russia. The most prominent and significant period in Ukraine history was while it was under the rule of the Soviet Union and was part of the tragic man-made famine.

The "Holodomor" (which translates as “death by hunger”) and is also known as the Terror-Famine or Famine-Genocide, occurred between 1932-1933, under the rule of dictator Joseph Stalin and killed approximately 4-5 million Ukrainians. During Stalin’s rule, he ordered "Collectivization" (social and economic control) of the entire countryside to reduce the power that the peasants had of their land and to reduce the chance of Ukraine trying to gain independence. He ordered farmers to work on the government land for very little money and to sacrifice their own land which the farmers/peasants revolted against. Due to this, Stalin took food away from the people and made it illegal for food to be picked from the fields and exported the majority of the grain that the country produced, resulting in millions of people dying from starvation.

The economy in Ukraine today is reliant on its agriculture products and machinery that are exported to approximately 210 countries.

Ukraine's Glory Has Not Yet Perished (Shche ne vmerla Ukraina)

Ukraine's freedom has not yet perished, not has her glory,
Upon us, fellow Ukrainians, fate shall smile once more.
Our enemies will vanish like dew in the sun,
And we too shall rule, brothers, in a free land of our own.

We'll lay down our souls and bodies to attain our freedom,
And we'll show that we, brothers, are of the Cossack nation.

We'll stand together for freedom, from the Syan to the Don,
We will not allow others to rule in our motherland.
The Black Sea will smile and grandfather Dnipro will rejoice,
For in our own Ukraine fortune shall flourish again.

Our persistence and our sincere toils will be rewarded,
And freedom's song will resound throughout all of Ukraine.
Echoing off the Carpathians, and rumbling across the steppes,
Ukraine's fame and glory will be known among all nations.

We offer free images of the Ukraine Flag in four sizes (small, medium, large, and high resolution). These images are distributed royalty free for both personal and educational use and are ideal for use in projects and on websites. If you choose to use one of our images, attribution is appreciated, but not required.

The following html code snippets can be copied and pasted to add an image of the Ukraine Flag to your website: