We carry authentic Lithuania Flags in both indoor and outdoor varieties. Our flags are proudly made in the United States from durable nylon and are printed with vibrant long-lasting inks. The Lithuania national flag is often displayed at embassies, outside of businesses associated with Lithuania, and at the homes of people who take great pride in their Lithuanian heritage.

Our indoor flags are finished with a pole hem and your choice of with or without golden fringe. Gold fringe is the traditional way to display an indoor flag, however, some people choose without fringe for a simple and clean look that is also less expensive. If you are looking for a complete indoor presentation set, our Build Your Own Indoor International Flag Set program allows you to select a durable nylon indoor Lithuania Flag and choose between premium quality poles, bases, and ornaments, and tassel. For indoor applications, most buyers choose a 3ft. x 5ft. flag with an 8ft. pole, however, if you have a low ceiling, you may opt for a 7ft. pole, which is designed to work with drop ceilings. If you are looking for a very substantial international flag display, our 4ft. x 6ft. indoor flags can be paired with a 9ft. pole for our largest indoor display option.

Our outdoor international flags are finished with a canvas header and brass grommets and are offered in four sizes: 2ft. x 3ft., 3ft. x 5ft., 4ft. x 6ft., and 5ft. x 8ft., to fit any sized flagpole. Typically, outdoor flags are flown outside of government organizations, businesses, and institutions on in-ground and wall-mount flagpoles, however, some people also buy these flags to display their international pride at home. If you are looking for a wall-mount Lithuania flag set to display outside of your home, our Build Your Own Outdoor International Flag Set program will allow you to choose between premium quality 6ft. poles and brackets to display the Lithuania Flag on your front porch. Outdoor flags can also be displayed indoors on interior walls of your home with screws anchored in the wall to attach to the grommets. 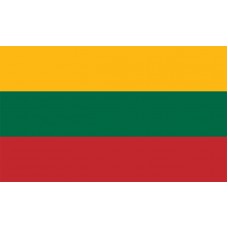 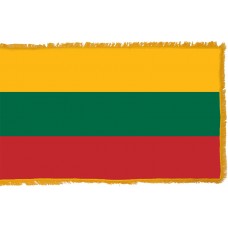 History of the Lithuanian Flag

The Lithuania flag was first adopted on April 25th, 1918, when they first declared independence from Russia but was forbidden from 1940 and re adopted again on March 20th, 1989. The flag holds great importance and significance to the country and on Independence Day, homeowners must fly the flag outside their house and they may be faced with a fine if they do not.

In the 14th Century, the Grand Duchy of Lithuania was the largest country in Europe. The Grand Duchy was discovered by Lithuania and included the lands of Belarus, Latvia, Ukraine, parts of Estonia, Moldova, Poland, and Russia. It remained this way during the Polish-Lithuania commonwealth in 1569 and was seen as a very prosperous state until its decline in 1795 when Poland and Lithuania were no longer separate nations and Lithuania began to be ruled by Russia.

In 1832 and 1863, both Poland and Lithuania tried to rebel against the Russians, only to be defeated. In 1915, the Germans took over Lithuania and on February 16th, 1918, Lithuania gained independence. In 1940, the Russians once again invaded Lithuania and it became part of the Soviet Union until 1941, during World War II, when Germany invaded Russia and Lithuania came under the Ruling of Nazi Germany from 1941-1944.

When Nazi Germany occupied Lithuania, practically all Lithuanian Jews were killed (approximately 190,000) which made it the highest total mortality rate of the holocaust. In 1945, following World War II, Russia once again took control of Lithuania and ruled until Lithuania's independence in 1989. Lithuania was the first soviet country that gained independence.

Lithuania is one of the three Baltic States (the other two being Estonia and Latvia). It is located in Northern Europe and it shares borders with Latvia, Belarus, Poland, and Russia. Its capital city is called "Vilnius." Lithuania is considered a high-income economy with a lot of the economy relying on agriculture and service. Tourism also contributes and is increasing each year as it is home to approximately 1000 tourist attractions. One of the most popular attractions includes the "Hill of Crosses" which is located in North Lithuania in Siauliai.

It is thought that crosses first began to be placed on the hills in 1832, in Lithuania's attempt to rebel against Russia. The crosses were placed there when families could not locate the bodies of their loved ones. Over the years, the hill of crosses held great importance to the natives and people began to go there, not only to mourn their loved ones but to pray for their country and for peace. It was estimated in 2006, that there are approximately 100,000 crosses there as well as carvings of the Virgin Mary.

Lithuania, our homeland,
Land of heroes!
Let your sons draw their strength
From our past experience

Let your children always follow
Only roads of virtue,
May your own, mankind's well-being
Be the goals they work for

May the love of Lithuania
Brightly burn in our hearts.
For the sake of this land
Let unity blossom

We offer free images of the Lithuania Flag in four sizes (small, medium, large, and high resolution). These images are distributed royalty free for both personal and educational use and are ideal for use in projects and on websites. If you choose to use one of our images, attribution is appreciated, but not required.

The following html code snippets can be copied and pasted to add an image of the Lithuania Flag to your website: