We carry authentic Myanmar Flags in both indoor and outdoor varieties. Our flags are proudly made in the United States from durable nylon and are printed with vibrant long-lasting inks. The Myanmar national flag is often displayed at embassies, outside of businesses associated with Myanmar, and at the homes of people who take great pride in their Myanmar heritage.

Our indoor flags are finished with a pole hem and your choice of with or without golden fringe. Gold fringe is the traditional way to display an indoor flag, however, some people choose without fringe for a simple and clean look that is also less expensive. If you are looking for a complete indoor presentation set, our Build Your Own Indoor International Flag Set program allows you to select a durable nylon indoor Myanmar Flag and choose between premium quality poles, bases, and ornaments, and tassel. For indoor applications, most buyers choose a 3ft. x 5ft. flag with an 8ft. pole, however, if you have a low ceiling, you may opt for a 7ft. pole, which is designed to work with drop ceilings. If you are looking for a very substantial international flag display, our 4ft. x 6ft. indoor flags can be paired with a 9ft. pole for our largest indoor display option.

Our outdoor international flags are finished with a canvas header and brass grommets and are offered in four sizes: 2ft. x 3ft., 3ft. x 5ft., 4ft. x 6ft., and 5ft. x 8ft., to fit any sized flagpole. Typically, outdoor flags are flown outside of government organizations, businesses, and institutions on in-ground and wall-mount flagpoles, however, some people also buy these flags to display their international pride at home. If you are looking for a wall-mount Myanmar flag set to display outside of your home, our Build Your Own Outdoor International Flag Set program will allow you to choose between premium quality 6ft. poles and brackets to display the Myanmar Flag on your front porch. Outdoor flags can also be displayed indoors on interior walls of your home with screws anchored in the wall to attach to the grommets.

In addition to the flags we offer for purchase, we maintain an archive of the audio and lyrics of the Myanmar National Anthem, historical information about the Myanmar flag, demographic data about Myanmar, and free high resolution images of the Myanmar flag for use in projects and on websites. 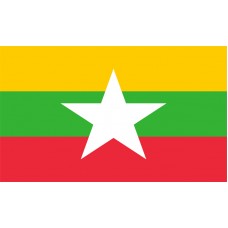 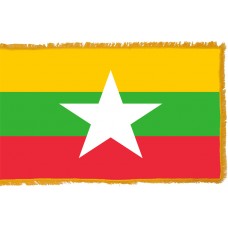 History of the Myanmar Flag

The Myanmar flag features three horizontal bands in the colors of yellow, green, and red. In the middle of the flag, is a 5-pointed white star. The three colors of the flag represent, "solidarity, peace, tranquility, courage and decisiveness." The Myanmar Flag that is used today was adopted on October 21st, 2010 and replaced the Myanmar flag that had been used since 1974.

Myanmar (also referred to as Burma) is the second largest country in Southeast Asia and shares borders with China, Laos, Thailand, Bangladesh, India, Andaman Sea, and the Bay of the Bengal. The capital city of Myanmar is called Naypyidaw and it became the capital in 2006 after the government moved it from Yangon. Yangon is the largest city in Myanmar.

The economy in Myanmar is mainly reliant on jade, gems, and oils as well as tourism which is gradually increasing, and Myanmar is proving to be a popular tourist destination. The most popular tourist attraction is "Bagan" (which was formerly known as Pagan). It is an ancient city in Myanmar in the Mandalay area that is home to the largest combination of Buddhist temples, Pagodas, and ruins in the world. The temples and ruins date back to the 11th and 12th centuries. The most well-known, famous, and sacred building is the "Shwedagon" or "Greater Dragon" Pagoda as it is thought that it contains a strand of Buddha’s hair as well as other artifacts and relics. It is a 2500 year old Pagoda that is located in Yangon. The "Buddhist Monastery of Taung Kalat" is another renowned and very visited site. The monastery sits on top of an extinct volcano plug and there are 777 steps leading up to it.

Myanmar, in the ancient times was a strong, steady and successful kingdom. During the 18th century, Myanmar became a place of strong interest to European traders and, as a result of 3 Anglo-Burmese wars, on January 1st, 1886, Burma came under full control of Britain. This caused many frequent conflicts and riots until the 1930s, which were mainly caused by the Burmese as they did not approve of the British rule and because of the disrespect that the British had for the Burmese culture. On April 1st, 1937, Burma became a colony of Great Britain and Ba Maw became the first Prime Minister and premier of Burma. Ba Maw was against the British rule and opposed them during WWII.

In 1940, the Burma Independence Army was formed in Japan by Aung San (the fifth premier of Burma), before they entered WWII and from 1940-1945, Burma was occupied by the empire of Japan until their defeat. During this war, Japan lost over 150,000 of their men. Following the war, Aung San guaranteed the independence of Myanmar and on January 4th, 1948, Myanmar finally became an independent state.

Till the End of the World, Burma (Kaba Ma Kyei)

Until the world ends up shattering, long lives Burma!
We love our land because this is our real inheritance.
We will sacrifice our lives to protect our country.
This is our nation, this is our land and it belongs to us.
Being our nation and our land, let us do good causes to our nation in unity!
And, this is our very duty to our invaluable land.

We offer free images of the Myanmar Flag in four sizes (small, medium, large, and high resolution). These images are distributed royalty free for both personal and educational use and are ideal for use in projects and on websites. If you choose to use one of our images, attribution is appreciated, but not required.

The following html code snippets can be copied and pasted to add an image of the Myanmar Flag to your website: