We carry authentic European Union Flags in both indoor and outdoor varieties. Our flags are proudly made in the United States from durable nylon and are printed with vibrant long-lasting inks.

Our indoor flags are finished with a pole hem and your choice of with or without golden fringe. Gold fringe is the traditional way to display an indoor flag, however, some people choose without fringe for a simple and clean look that is also less expensive. If you are looking for a complete indoor presentation set, our Build Your Own Indoor International Flag Set program allows you to select a durable nylon indoor European Union Flag and choose between premium quality poles, bases, and ornaments, and tassel. For indoor applications, most buyers choose a 3ft. x 5ft. flag with an 8ft. pole, however, if you have a low ceiling, you may opt for a 7ft. pole, which is designed to work with drop ceilings. If you are looking for a very substantial international flag display, our 4ft. x 6ft. indoor flags can be paired with a 9ft. pole for our largest indoor display option.

Our outdoor international flags are finished with a canvas header and brass grommets and are offered in four sizes: 2ft. x 3ft., 3ft. x 5ft., 4ft. x 6ft., and 5ft. x 8ft., to fit any sized flagpole. Typically, outdoor flags are flown outside of government organizations. If you are looking for a wall-mount European Union flag set, our Build Your Own Outdoor International Flag Set program will allow you to choose between premium quality 6ft. poles and brackets to display the European Union Flag. 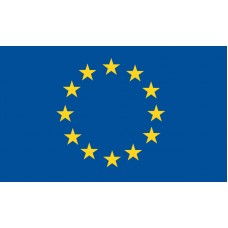 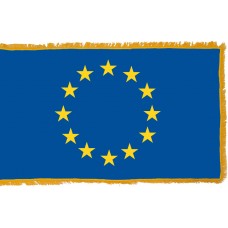 History of the European Union Flag

The European Union Flag was officially adopted on December 8th, 1955 and is a dark blue flag that features a circle that is made up of twelve, 5-pointed stars. The twelve stars and the flag represent the various countries involved showing unity and harmony. The council of Europe described the flag as: "gainst the blue sky of the Western World, the stars represent the peoples of Europe in a circle, a symbol of unity. Their number shall be invariably set at twelve, the symbol of completeness and perfection." The European Union flag was designed in 1950, but not adopted until 1955.

The European Union is the combination and harmony of 28 states located in Europe. It was initially formed following World War II, to put a stop to the wars that were occurring and to bring the countries together. In 1952, Germany, France, Italy, Belgium, the Netherlands, and Luxembourg came together and formed the European Coal and Steel community. This was formed under the "Schuman Declaration" (Robert Schuman) who's aim was to make it impossible for France and Germany to go to war again. The men responsible for forming the European Union are Robert Schuman, Akide De Gasperi, Jean Monnet, and Paul Henri Spaak. In 1957, another treaty was signed and named the "European Economic Community" (EEC).

Slowly, over the years, more countries realised that this would also be beneficial to them and began to join. The 28 countries that are now part of the European Union are: Germany, France, Italy, Belgium, Netherlands, Luxembourg (1952), Denmark, Ireland, United Kingdom (1973), Greece (1981), Spain, Portugal (1986), Austria, Finland, Sweden (1995), Cyprus, Czech Republic, Estonia, Hungary, Latvia, Lithuania, Malta, Poland, Slovakia, Slovenia (2004), Bulgaria, Romania (2007), and Croatia (2013). Any European country is allowed to join the European Union, as long as certain criteria are met including agreeing to all the European Union rules, having the consent of the other EU member countries and having the consent of the citizens, which is normally done through voting. The United Kingdom are currently in the process of leaving The European Union, this "Brexit" will be complete by 2019.

Ode to Joy (Anthem of Europe)

Joy, beautiful sparkle of the gods,
Daughter of Elysium!
We enter, fire-drunk,
Heavenly one, your shrine.
Your magic again binds
What custom has firmly parted.
All men become brothers
Where your tender wing lingers.

We offer free images of the European Union Flag in four sizes (small, medium, large, and high resolution). These images are distributed royalty free for both personal and educational use and are ideal for use in projects and on websites. If you choose to use one of our images, attribution is appreciated, but not required.

The following html code snippets can be copied and pasted to add an image of the European Union Flag to your website: