We carry authentic American Samoa Flags in both indoor and outdoor varieties. Our flags are proudly made in the United States from durable nylon and are printed with vibrant long-lasting inks. The American Samoa national flag is often displayed at embassies, outside of businesses associated with American Samoa, and at the homes of people who take great pride in their American Samoa heritage.

Our indoor flags are finished with a pole hem and your choice of with or without golden fringe. Gold fringe is the traditional way to display an indoor flag, however, some people choose without fringe for a simple and clean look that is also less expensive. If you are looking for a complete indoor presentation set, our Build Your Own Indoor International Flag Set program allows you to select a durable nylon indoor American Samoa Flag and choose between premium quality poles, bases, and ornaments, and tassel. For indoor applications, most buyers choose a 3ft. x 5ft. flag with an 8ft. pole, however, if you have a low ceiling, you may opt for a 7ft. pole, which is designed to work with drop ceilings. If you are looking for a very substantial international flag display, our 4ft. x 6ft. indoor flags can be paired with a 9ft. pole for our largest indoor display option.

Our outdoor international flags are finished with a canvas header and brass grommets and are offered in four sizes: 2ft. x 3ft., 3ft. x 5ft., 4ft. x 6ft., and 5ft. x 8ft., to fit any sized flagpole. Typically, outdoor flags are flown outside of government organizations, businesses, and institutions on in-ground and wall-mount flagpoles, however, some people also buy these flags to display their international pride at home. If you are looking for a wall-mount American Samoa flag set to display outside of your home, our Build Your Own Outdoor International Flag Set program will allow you to choose between premium quality 6ft. poles and brackets to display the American Samoa Flag on your front porch. Outdoor flags can also be displayed indoors on interior walls of your home with screws anchored in the wall to attach to the grommets. 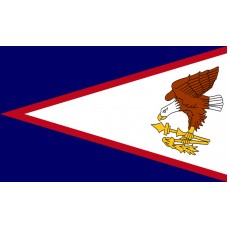 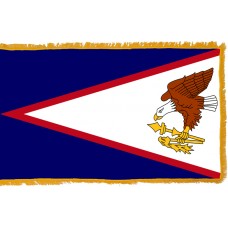 History of the American Samoa Flag

The American Samoan flag features a large white triangle pointing inwards towards the mast set on a blue background. A red line follows the border of the white triangle. A bald eagle depicted in the middle of the white triangle is holding traditional Samoan emblems, a war club in one claw and an orator's fly trap in the other. The colors used on the flag are representative of both the United States and Samoa.

The American stars and stripes flag flew in American Samoa until the year 1960, when Samoans became more active in their own government and proposed that a new flag should be designed. The US Government invited the Samoans to be included in a meeting where design ideas were discussed for the new flag; The U.S. Army of Heraldry created the new design with the Samoans feedback in mind. The current American Samoa flag was first adopted as the official flag of the territory in 1960, sixty years to the day after the USA raised their own flag over American Samoa.

Because of their history with Americans on their soil, the Samoans wanted a symbol that represented the two nations now living in harmony and the Samoans being guarded by their American allies. Bringing cultural, regional and political meanings together in one flag to represent their nation.

The bald eagle is featured as a symbol the United States. The eagle is clutching two Samoan symbols: the war club which represents the government's power and the fly-whisk which represents the wisdom of traditional Samoan leaders. The fact that the bald eagle clutches the two Samoan symbols signifies the United States as guardians who watch over Samoa.

American Samoa is located in south-eastern Samoa and the island is situated in the South Pacific Ocean, in the geographical region of Oceana. The area spans over 76.8 square miles and has a population of 55,519 people. The five islands are volcanic and American Samoa has been frequently hit by cyclones in recent years. Thee seasons are stable with balanced dry and wet days.

We offer free images of the American Samoa Flag in four sizes (small, medium, large, and high resolution). These images are distributed royalty free for both personal and educational use and are ideal for use in projects and on websites. If you choose to use one of our images, attribution is appreciated, but not required.

The following html code snippets can be copied and pasted to add an image of the American Samoa Flag to your website: