We carry authentic Kuwait Flags in both indoor and outdoor varieties. Our flags are proudly made in the United States from durable nylon and are printed with vibrant long-lasting inks. The Kuwait national flag is often displayed at embassies, outside of businesses associated with Kuwait, and at the homes of people who take great pride in their Kuwait heritage.

Our indoor flags are finished with a pole hem and your choice of with or without golden fringe. Gold fringe is the traditional way to display an indoor flag, however, some people choose without fringe for a simple and clean look that is also less expensive. If you are looking for a complete indoor presentation set, our Build Your Own Indoor International Flag Set program allows you to select a durable nylon indoor Kuwait Flag and choose between premium quality poles, bases, and ornaments, and tassel. For indoor applications, most buyers choose a 3ft. x 5ft. flag with an 8ft. pole, however, if you have a low ceiling, you may opt for a 7ft. pole, which is designed to work with drop ceilings. If you are looking for a very substantial international flag display, our 4ft. x 6ft. indoor flags can be paired with a 9ft. pole for our largest indoor display option.

Our outdoor international flags are finished with a canvas header and brass grommets and are offered in four sizes: 2ft. x 3ft., 3ft. x 5ft., 4ft. x 6ft., and 5ft. x 8ft., to fit any sized flagpole. Typically, outdoor flags are flown outside of government organizations, businesses, and institutions on in-ground and wall-mount flagpoles, however, some people also buy these flags to display their international pride at home. If you are looking for a wall-mount Kuwait flag set to display outside of your home, our Build Your Own Outdoor International Flag Set program will allow you to choose between premium quality 6ft. poles and brackets to display the Kuwait Flag on your front porch. Outdoor flags can also be displayed indoors on interior walls of your home with screws anchored in the wall to attach to the grommets.

In addition to the flags we offer for purchase, we maintain an archive of the audio and lyrics of the Kuwait National Anthem, historical information about the Kuwait flag, demographic data about Kuwait, and free high resolution images of the Kuwait flag for use in projects and on websites. 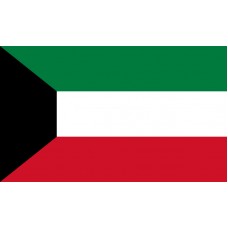 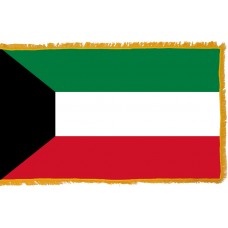 History of the Kuwait Flag

The Kuwait flag was first adopted on September 7th, 1961 and was first raised on November 24th, 1961. Prior to this flag, the Kuwait Flag just featured the colors red and white and between 1759-1899, the national flag was completely red.

In 1899, Kuwait became a British Protectorate as the country's independence was being threatened by the Ottoman Empire. In 1941, at the start of WW II, Britain took complete control of Kuwait (and Iraq) and it remained this way until Kuwait gained independence from Britain on June 19th, 1961 when it became the first Arab State to have a Parliament. Since its independence, in 1990, Kuwait was once again invaded by Iraq, which resulted in the "Gulf War."

Kuwait holds a month-long celebration beginning from February 1st – February 28th each year to celebrate their liberation and independence from Britain. This festival is called "Hala Febrayer" and consists of concerts, carnivals, and parades. The festival is a popular tourist attraction. The official national day is on February 24th even though Independence Day is in June. It was celebrated in June until 1962 when it was moved to February due to the weather being too hot during that month to be able to celebrate. Kuwait is considered to be one of the hottest countries in the world between June and August.

Kuwait is an Arab country that is located in the Middle East and shares borders with Saudia Arabia and Iraq and it is the only country in the world that does not have a natural water supply. The capital of Kuwait is Kuwait City. Kuwait is home to nine islands, with only one of those islands (Failaka) being inhabited. The economy in Kuwait is mainly reliant on the oil industry as Kuwait has the 5th largest oil industry in the world. It was discovered in 1938. The currency (Kuwaiti Dinar) is the highest valued currency in the world.

Kuwait is home to some of the tallest buildings, which include the "Liberation Tower," which is the largest tower in Kuwait and also one of the tallest towers in the world. It was built in 1996 and is very symbolic as it represents Kuwait's independence and their triumph. The tower also features a revolving restaurant. The "Al Hamra Tower" in Kuwait, is the world's 23rd tallest skyscraper.

Kuwait, my country, may you be safe and glorious!
May you always enjoy good fortune!
You are the cradle of my ancestors,
Who put down its memory.

With everlasting symmetry, showing all eternity,
Those Arabs were heavenly,
Kuwait, my country,
May you be safe and glorious!
May you always enjoy good fortune.

Blessed be my Country a homeland for harmony,
Warded by true sentry giving their soils aptly,
Building high its history, Kuwait,
My country, we're for you my Country,

Led by faith and loyalty,
With its Amir equally,
Fencing us all fairly, with warm love and verity,
Kuwait, my country,

May you be safe and glorious.
May you always enjoy good fortune!

We offer free images of the Kuwait Flag in four sizes (small, medium, large, and high resolution). These images are distributed royalty free for both personal and educational use and are ideal for use in projects and on websites. If you choose to use one of our images, attribution is appreciated, but not required.

The following html code snippets can be copied and pasted to add an image of the Kuwait Flag to your website: