We carry authentic Tonga Flags in both indoor and outdoor varieties. Our flags are proudly made in the United States from durable nylon and are printed with vibrant long-lasting inks. The Tonga national flag is often displayed at embassies, outside of businesses associated with Tonga, and at the homes of people who take great pride in their Tongan heritage.

Our indoor flags are finished with a pole hem and your choice of with or without golden fringe. Gold fringe is the traditional way to display an indoor flag, however, some people choose without fringe for a simple and clean look that is also less expensive. If you are looking for a complete indoor presentation set, our Build Your Own Indoor International Flag Set program allows you to select a durable nylon indoor Tonga Flag and choose between premium quality poles, bases, and ornaments, and tassel. For indoor applications, most buyers choose a 3ft. x 5ft. flag with an 8ft. pole, however, if you have a low ceiling, you may opt for a 7ft. pole, which is designed to work with drop ceilings. If you are looking for a very substantial international flag display, our 4ft. x 6ft. indoor flags can be paired with a 9ft. pole for our largest indoor display option.

Our outdoor international flags are finished with a canvas header and brass grommets and are offered in four sizes: 2ft. x 3ft., 3ft. x 5ft., 4ft. x 6ft., and 5ft. x 8ft., to fit any sized flagpole. Typically, outdoor flags are flown outside of government organizations, businesses, and institutions on in-ground and wall-mount flagpoles, however, some people also buy these flags to display their international pride at home. If you are looking for a wall-mount Tonga flag set to display outside of your home, our Build Your Own Outdoor International Flag Set program will allow you to choose between premium quality 6ft. poles and brackets to display the Tonga Flag on your front porch. Outdoor flags can also be displayed indoors on interior walls of your home with screws anchored in the wall to attach to the grommets.

In addition to the flags we offer for purchase, we maintain an archive of historical information about the Tonga flag, demographic data about Tonga, and free high resolution images of the Tonga flag for use in projects and on websites. 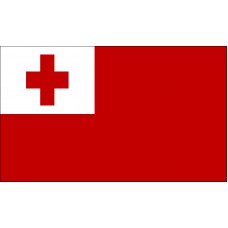 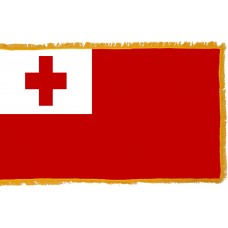 History of the Tonga Flag

The Tonga Flag features a red field with a white square in the top left-hand corner that has a red cross in the center of it. The red color represents the blood of Christ during his crucifixion and the cross represents the main religion of the country, which is Christianity and the majority of the population feel they owe their salvation to Christ.

The white color represents the purity. The previous design of the Tonga flag was very similar and featured a white field with a red cross in the center. It was changed as it resembled the red cross flag. The Tonga flag was adopted on November 4th, 1875 and is one of the oldest flags in the world. A law implied in 1875 states that the Tonga Flag should never be altered.

Tonga is an island country that is made up of 170 islands, of which 36 are inhabited. It is a country located in the Southern Pacific Ocean and its neighboring countries are Fiji, Wallis, and Futana, Samoa, Niue, Kermadec, New Caledonia, and Vanuatu. Tonga's islands are divided into three groups which are, Vava'u, Ha'apao, and Tongatapu. The majority of the population (70%) live on the island of Tongatapu. The capital and largest city of Tonga is Nuku'alofa.

Tonga was inhabited by Polynesians for approximately 3,000 years. The island was first discovered by Europeans in 1616 when the Dutch vessel named "Eendracht" reached the island. In 1773, explorer James Cook visited the island and named them the "friendly islands." James Cook arrived during the "Inasi Festival" which is a yearly donation of the first fruits to the Tu'i Tonga and he was invited to join the festivities which is the reason Tonga acquired that title. On 18th May 1900, Tonga became a British Protectorate under a Treaty of Friendship and remained a protectorate until 1970.

Agriculture plays a major role in Tonga's economy. Despite the landmarks, sights and attractions that Tonga is home to, tourism is quite underdeveloped. As well as being home to many beautiful beaches for diving and snorkeling the main attraction for those that do choose to visit the island is whale-watching. This is very popular between June to November as the humpback whales travel to the island of Vava'u to breed. The "Royal Tombs" is another popular attraction and is where the past Kings and Queens of the island have been buried.

The Royal Palace, which is located in Nuku'alofa is a wooden palace that was built in 1867 and is the official residence of the monarchy. Even though access to the palace is forbidden, the outside is very admitted. The "Anahulu Cave" is a cave that is made up of limestone and features many freshwater pools and its biggest pool is the most popular bathing area in the country.

We offer free images of the Tonga Flag in four sizes (small, medium, large, and high resolution). These images are distributed royalty free for both personal and educational use and are ideal for use in projects and on websites. If you choose to use one of our images, attribution is appreciated, but not required.

The following html code snippets can be copied and pasted to add an image of the Tonga Flag to your website: